Two years ago, as the e-commerce site for crafty goods, Etsy, went public, I wrote a post for another publication about the company’s certification as B Corp, which basically means that a third party has said it’s doing its best to be good to workers, the environment and everyone. Etsy mentioned its status as a B Corp in the disclosures listed in its S-1, a document companies file with the SEC before going public. It mentioned the certification because losing it might result in harm to its reputation.

My post explained what was at stake for Etsy as B Corp going public (it got a bit confusing, more on that below), but fundamentally I made this prediction: either the organization that certified them or Etsy would have to make a large compromise, unless Etsy just lost its B Corp certification all together.

That prediction turned out to be right. Etsy now has the opportunity to retain its B Corp status through 2019, with an important caveat. Let’s go through it step by step.

B Corps are certified by a Pennsylvania-based non-profit called B Lab. Here is the big sticking point: B Lab’s rules say that if a company was certified in a state that had a law that recognized public benefit corporations (PBCs), then the company had to re-incorporate as a PBC. A PBC is not the same as a B Corp (this is the confusing part). B Corp status is like the “Good Housekeeping Seal,” a corporate merit badge.

A public benefit corporation is a legal identity that says that company has the right to pursue goals other than making its shareholders richer. It also gives shareholders the right to take action against a company if it isn’t doing enough good, which is very unusual. Etsy is incorporated in Delaware, which passed a PBC law in 2013.

I reported the 2015 story based on publicly available documents, but we updated the post afterward with comment from a B Lab co-founder who said that his organization would not bend its rules. At the time, he believed the four-year timeline was still reasonable.

On August 1, B Lab published a statement on Etsy’s B Corp page, stating that if Etsy re-certified as B Corp by the end of this year, with a commitment to re-incorporate as a PBC in Delware, it would reset the deadline to August 2019. This date is not entirely irrational, because it’s dated against the revised PBC law Delaware passed in 2015, not long after Etsy went public.

“One of the things we realized after that IPO was that the statute that was passed in 2013 was perfectly fine for private companies and unworkable for public companies,” B Lab co-founder Andrew Kassoy explained to the Observer in a phone call.

Here’s what Kassoy means: The 2013 law required a public company to get a 90 percent vote of its shareholders in favor of converting to a PBC in order to do so; the 2015 law lowered that threshold to 66 percent. It’s fair to say that it’s hard to imagine even getting 90 percent of its outstanding shares to cast a vote on anything, let alone getting them to cast it the same way.

It’s also fair to say that B Lab had no way to know that the 2015 law would pass that year. It had been introduced by the time I spoke to B Lab, but that doesn’t mean a bill will become law. On the other hand, if Etsy had started working on re-incorporating after going public, it probably could have gotten a vote through its shareholders, one way or another, by now.

Kassoy acknowledged that extending Etsy’s deadline could give its rules less credibility, but he also believes there is more clarity about the new corporate status now. With loads of PBCs in the United States now, it’s less of a foreign concept to executives and corporate attorneys (fellow Brooklyn tech company Kickstarter reincorporated as a benefit corporation in September 2015).

As a large company, Etsy pays B Lab the highest level of dues on its schedule, $25,000 each year. As a non-profit with a $10 million annual budget, B Lab’s co-founders argue that this level of funding is not material to the existence of the organization. Kassoy explained that its due structure tops out in order to prevent one or a handful of companies’ dues from becoming too important to the organization’s survival.

If we were to make another prediction, we’d predict that Etsy won’t become a PBC. None of the signs suggest it will. Etsy declined to comment to the Observer on whether or not its board had discussed making the transition.

But when we spoke to then-CEO Chad Dickerson last summer, he said, “Right now, we don’t have plans to re-incorporate as a public benefit corporation.”

Kassoy expressed appreciation for the progress Etsy has made since it first became a B Corp. Companies are scored on a scale of 200 and only get certified if they achieve a score of 80. The first time Etsy was scored, in 2012, it earned exactly 80 points. In 2013 it earned 105. In 2016, it earned 127. That kind of progress is the sort of example, Kassoy said, that it looks to large companies set for smaller ventures in the B Corp community. We wrote about Etsy’s annual social impact report in 2015.

In May, Chad Dickerson was removed as CEO and lots of staff were laid off.

“While the certification is a great validation of the work we are doing, it is in no way an impetus or driving factor for our business decisions,” an Etsy spokesperson wrote the Observer in an email.

None of this makes it sound like re-incorporating has ever been in Etsy’s roadmap. The stock price has stayed relatively well below its price shortly after opening on a public exchange, though it is up since Josh Silverman took over as CEO in May. That’s probably it’s higher priority.

Jay Coen Gilbert, B Lab’s other co-founder, wrote the Observer in an email, “If Etsy’s new leadership decides that maintaining their B Corp status is an important part of their strategy, the trends in the capital markets suggest that they should be able to secure shareholder approval to do so.”

The real danger to B Lab would be that Etsy agrees to re-certify but doesn’t follow through with its commitment to reincorporate by 2019. Or, Etsy re-certifies then gets acquired, making it look like it just did so to maintain its value prior to the purchase. That would probably end up looking worse for B Lab than it would for Etsy, but it really wouldn’t look that good for either one. 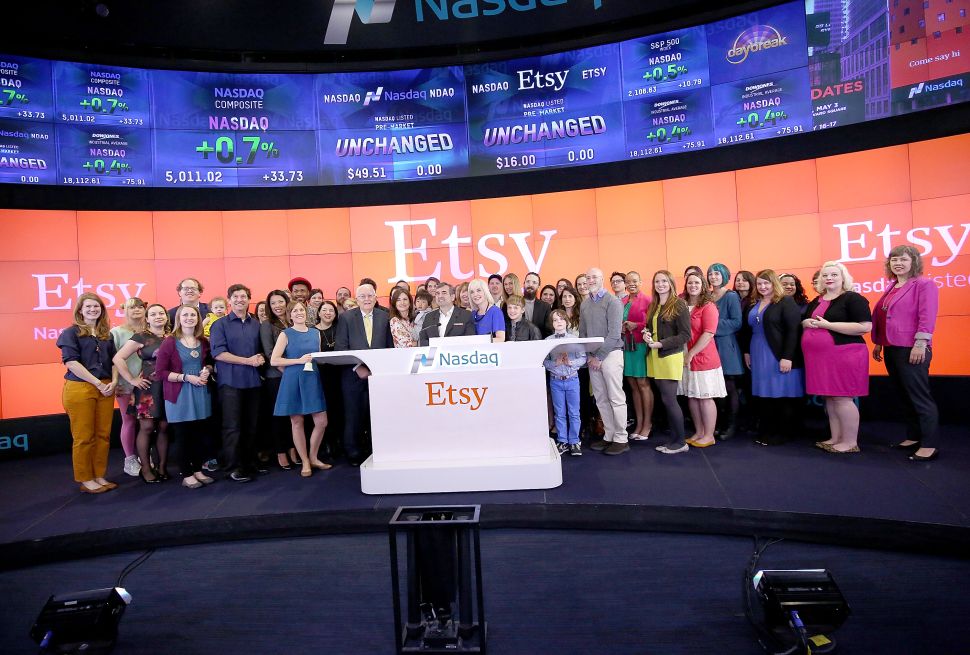