Before I talk at you about Facebook’s role in influencing an election whose consequences are imperiling the future of democracy and hurling us toward a nuclear holocaust, I want to direct your attention to the most important message I hope to communicate today. I am a person, just like you, not a callow, unfeeling bot as many suspect, especially those who noted the stilted way I interacted with the child and wife props in the video about my robot butler Jarvis. I will now casually recite my children’s names while mentioning how I enjoy spending time with them in an endearing way that is completely unlike how Nixon invoked his feelings for his dog, Checkers. You’ll also notice that I’m not wearing my trademark two thousand dollar cashmere Brunello Cucinelli hoodie. No, I’m wearing a much more egalitarian, though still pricey t-shirt in my public appearances now. I come to you today, bathed in glowing light, to convey an openness and transparency sorely lacking in our secret algorithms and impenetrable Terms of Service.

Today is my first day back from two months of paternal leave. Don’t dwell on that or you might start to think about the time off you didn’t get; what’s important is the reminder that I am a dad and that the latest revelations about Russian ads did not happen on my watch.

I care deeply about the backlash that is causing many users to consider deleting Facebook and the democratic process, that too. I don’t want anyone to use our tools to undermine democracy—that’s not what we stand for. What we stand for is providing the most efficient FOMO delivery system in a cyberspace echo chamber tailored to your specific interests. Like: yoga pants, home health care products, trolling your ex, and being a Jew Hater, how to burn Jews, and why Jews run the world. Wait, those last ones were a fail on our part, but that’s on Sheryl.

You may be wondering why we didn’t know it was Russians who bought the ads. It’s like I said in my DACA live stream in which I crowded three Dreamers into a small corner of my mansion and attempted an empathic response by saying “immigration is complicated.” Well, tracing ads is too. I wish we could catch all the interference, but have you seen the video I posted of grilling meat? That’s right, I’m not part of the Silicon Valley vegan mafia, like Peter Thiel and Elon Musk. I eat meat—lots of it—just like you.

Facebook’s mission is all about bringing people closer together through keeping you logged onto the site way longer than you intended. That’s why while we avoided our due diligence on ad purchases, we introduced The Friendaversary. I hope you are wasting many hours you’ll never get back, watching montages of staggeringly random photos celebrating the day you started hate-following your boss, clicked ACCEPT on a friend request from someone you have no memory of ever meeting, and became “friends” with your kid—even though it’s not their real page, the one where they post pictures of themselves wearing fuzzy pink boots and are high out of their mind on MDMA.

During the months I’ve been dodging responsibility for running an engine of deception and propaganda, we introduced a time-sucking feature that lets you know how many new shallow connections you’ve made each month. We’ve chosen to display only their profile pictures, so you can ponder if the person whose profile picture is an embarrassed raccoon is that shut-in cousin of the friend you haven’t seen since high school, or the Lyft driver you who keeps inviting you to an Herbalife Shake Party, while we show you more ads.

Another way we’re ensuring that Facebook is a force for good in the world is by helping you transform your thoughtful insights into MEMES. Now, you can announce that you passed a kidney stone on a background of hearts, bright colors, and cats.

It’s important not to lose sight that during the campaign people had billions of open interactions and discussions on Facebook that might not have happened offline. The majority of these exchanges concluded with:  YOU ARE A F**KING IDIOT, My page, my rules!, and I’m blocking you and I hope you get pancreatic cancer—and that’s the bad one! Then you went right back to clicking on the fake news that confirmed things that you already believed were true, but did I mention my Hungarian sheepdog, Beast? Almost three million of you follow him, and that’s on you.

I am not going to confirm or deny that the rumors I am running for office are the reason behind my new bland, homogenized personality that recent hires—Democratic pollster Joel Benenson; David Plouffe, campaign manager for Obama’s 2008 presidential run; Amy Dudley, former communications adviser for Sen. Tim Kaine; and Ken Mehlman, who directed President George W. Bush’s 2004 re-election campaign—have carefully constructed for me. Instead, I’d like to invite you to follow my travels to all 50 states in what we internally refer to as my “looking like listening” tour. Why just the other day, I was in Dallas testifying in a lawsuit concerning my acquisition of Oculus, even though shots of me taken by Charles Ommanney, a photographer for both the Bush and Obama presidential campaigns, show me planting a community garden alongside ordinary people. And I’m not an atheist anymore, either.

For those considering deleting Facebook: Remember, it was only a few short weeks ago that Google fired an engineer for penning an anti-diversity memo. You didn’t switch to Bing, did you? LOL. How about how the Equifax hack exposed the personal information of 143 million people and then their Twitter feed directed customers to a fake phishing site? Talk about schadenfreude! Which, of course, is the German word for taking pleasure in others’ misfortunes, and did I tell you that we worked to ensure the integrity of the German elections?

Thanks for tuning in and don’t forget, Facebook is free and always will be. That one always cracks me up. We’ll keep you updated on coding improvements to my relatability software, and our efforts to protect election integrity, that too.

Annabelle Gurwitch is an actress and best selling author. Her most recent collection of essays, Wherever You Go, There They Are was published Penguin Random House this spring. She also wrote I See You Made an Effort, a New York Times Bestseller and a finalist for the Thurber Prize. Follow her on Twitter @AnnabelGurwitch

Also by Annabelle Gurwitch: A Letter From the Dean of Safe Spaces 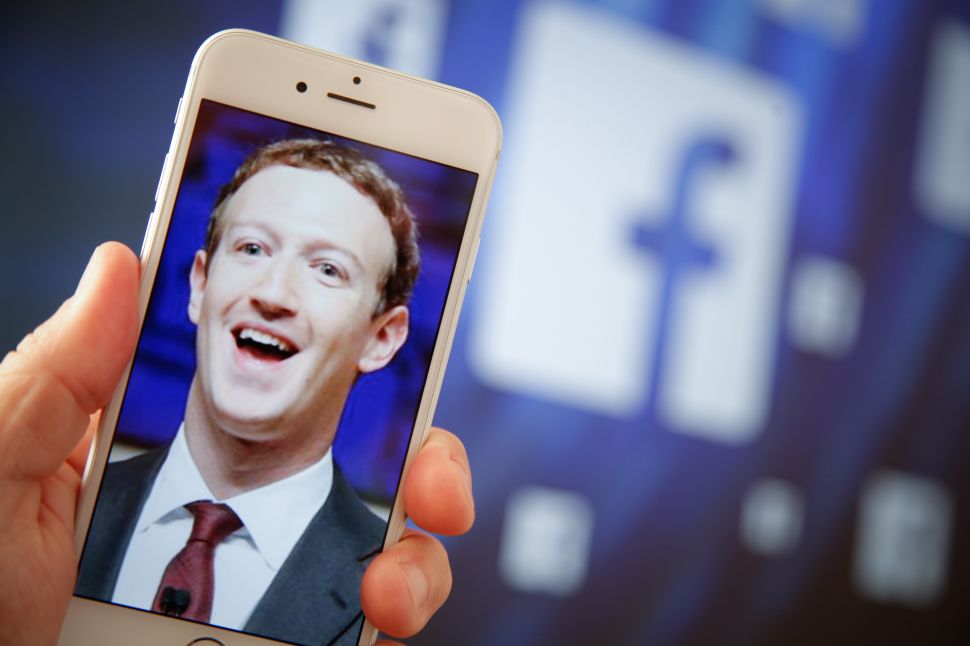