For centuries, Harvard has been our country’s most prestigious university, while its rather newer John F. Kennedy School of Government serves as mecca for graduate students seeking entry to the elite halls of power—especially in Washington, D.C. The K-School, as it’s known to Cambridge cognoscenti, also provides sinecures for veteran pols and Beltway hangers-on, who are ideal faculty to teach the ways of American governance to the rising generation.

The K-School doles out fellowships as well, including to visiting fellows. These are hardly more than honorifics, not actual jobs, yet they are undeniably prestigious. They are also a way for Harvard to remain au courant with trendy issues of the day. However, an unusual firestorm erupted last week when the K-School announced its new crop of visiting fellows—roughly 10 are selected annually—and the list included Chelsea Manning.

Manning—then Bradley—became a celebrity of sorts back in 2010 as an Army private who, while serving in Iraq, stole some 750,000 classified documents and passed them to WikiLeaks. In so doing, Manning became an icon to anti-American activists everywhere, yet Washington was far from amused.

The lion’s share of what Manning purloined and WikiLeaks revealed to the world consisted of State Department cable traffic, which isn’t highly classified yet is enormously sensitive. This represents the nuts and bolts of diplomacy—conversations between Foggy Bottom and our embassies worldwide about what foreign emissaries say to them, and vice versa—and it’s kept secret with good reason. Foreigners speak frankly to our diplomats because they expect, reasonably, that those conversations will remain private. Manning blew all that up.

The cost to American power and prestige that followed was difficult to enumerate yet very real. Our friends, allies and interlocutors, witnessing WikiLeaks dump their secret chats with Washington online, understandably wondered if America could keep secrets any longer. This was a humiliating experience, especially for the nation’s top diplomat at the time, Hillary Clinton.

She took the Manning case personally—who, in Hillary’s shoes, would not?—and wanted justice to be served. The Defense Department and our Intelligence Community were equally livid about Manning, since plenty of their secrets were embedded in the vast trove of stolen files that Manning gave to Julian Assange. Although the Pentagon’s official public assessment is that these revelations cost no lives, that is widely considered to be a pleasant fiction in intelligence circles. Unquestionably the personal information that WikiLeaks dumped online, care of Manning, endangered foreigners who were working for the American government.

The case also made WikiLeaks a global sensation, casting its founder Assange into the media limelight. The Manning revelations suited his partner’s agenda perfectly, since Assange seeks to expose the secret doings of Western, democratic countries—above all the United States, Assange’s preeminent bugbear. However, it speaks volumes about WikiLeaks that its combing through of the classified files stolen by Manning, seeking the most embarrassing ones for Washington to feature online—a process pompously termed “curation” by Assange—was conducted by the WikiLeaks higher-up Israel Shamir.

Shamir is a notorious and bizarre figure, a Russian Jew and Israeli citizen who’s also a vehement anti-Semite and Holocaust denier. As I’ve explained previously, Shamir’s official biography is nonsensical. He admits to close ties to Neo-Nazis, yet he is one of Assange’s closest associates and friends. Shamir is also believed by Western counterintelligence to be a Kremlin agent going back to KGB times.

Assange and WikiLeaks emerged from the Manning story smelling of roses, the darlings of the global media, but it was Manning who paid the price. The army private was court-martialed and convicted in 2013 of multiple violations of the Espionage Act, receiving a 35-year sentence. The case raised many troubling questions: How had someone so obviously psychologically unfit wound up in military intelligence? Why had no co-workers or leaders made a fuss regarding Manning’s bizarre behavior? Above all, why did a lowly army private sitting in Iraq have easy access to so many state secrets that had nothing to do with Manning’s low-level job?

Such questions faded into obscurity, as did Manning for a time. These security issues would soon be revisited in the sensational case of Edward Snowden, the NSA contractor who defected to Moscow in June 2013, having stolen a trove of American and allied secrets far greater and more sensitive than what Manning had purloined. The Snowden case—managed, yet again, by Assange and his retinue, who got the defector to Russia—made WikiLeaks even bigger global celebrities.

Manning regained celebrity by transitioning to a woman named Chelsea while in prison. She became an icon to some in the LGBT community, which surely had something to do with President Obama’s out-the-door decision to commute Manning’s sentence three days before he left the White House. Obama’s choice was met with howls of indignation from some, by no means exclusively on the right, who regarded Manning as anything but a victim of injustice, as she claims.

Newly freed in May 2017, Manning became an activist with a very active Twitter feed, notable for its left-wing preaching and extensive use of emojis. Her appointment as a K-School visiting fellow was heralded by some as a mark of progress but blew up in Harvard’s face immediately. After all, the K-School relies on veteran Washington machers to provide faculty and expertise—exactly the sort of people, regardless of their political views, who were not amused by Manning’s criminal acts against our government.

Without delay, Mike Morell, a retired CIA deputy director and seasoned Beltway player, resigned his senior fellowship at the K-School in a scathing letter that stated, “I cannot be part of an organization which honors a convicted felon and leaker of classified information.” Predictably, Manning mocked Morell’s gesture in an emoji-laden tweet, yet Harvard’s selection of her soon proved untenable.

CIA Director Mike Pompeo cancelled a talk scheduled for last Thursday at the K-School, denouncing Manning as “an American traitor” and adding, “It is shameful of Harvard to put its stamp of approval on her treasonous actions.” The K-School dean, Doug Elmendorf, sheepishly noted, “We will try to reschedule it as soon as we can,” but rejection by Pompeo, a Harvard Law grad, clearly stung. Particularly because Pompeo made clear that his non-appearance reflected the wishes of the CIA workforce, which views Manning as a criminal who aided our country’s enemies. I can testify that this opinion is normative in both the IC and the Pentagon, where Manning is thoroughly despised.

Unsurprisingly, the K-School on Friday withdrew Manning’s visiting fellowship, with Dean Elmendorf calling the appointment “a mistake” since he and his staff hadn’t realized that some people outside Cambridge might not regard Manning as a hero: “I apologize to her and to the many concerned people from whom I have heard today for not recognizing upfront the full implications of our original invitation.” It beggars belief that an institution devoted to studying our government, staffed heavily by experienced Washington players, had so little idea how people inside the Beltway feel about those who break our espionage laws and betray the public’s trust. It’s called the academic bubble for a reason.

On cue, Manning tweeted madly with a great deal of emojis about her new victimhood, blaming Harvard for “police state” tactics, thereby revealing how little she knows about actual police states. After all, a Manning in Russia who stole secret government files and gave them to Moscow’s enemies would have been shot without much fuss, and her fate in Communist China and many other less-than-free countries would be no kinder.

Some on the Left continue to hail Manning as a hero of sorts, even a martyr, while many of her critics are on the Right. Yet, ironically, it’s mainstream liberals who have been Chelsea’s real victims. After all, her crimes badly damaged Hillary Clinton during her tenure as secretary of state, while Manning’s boosting of WikiLeaks hurt Hillary and the Democrats, not Republicans, in 2016. Without Manning and then Snowden, Assange and his crew would never have had the cachet to so profoundly influence our election last year to the benefit of Donald Trump—and Moscow. 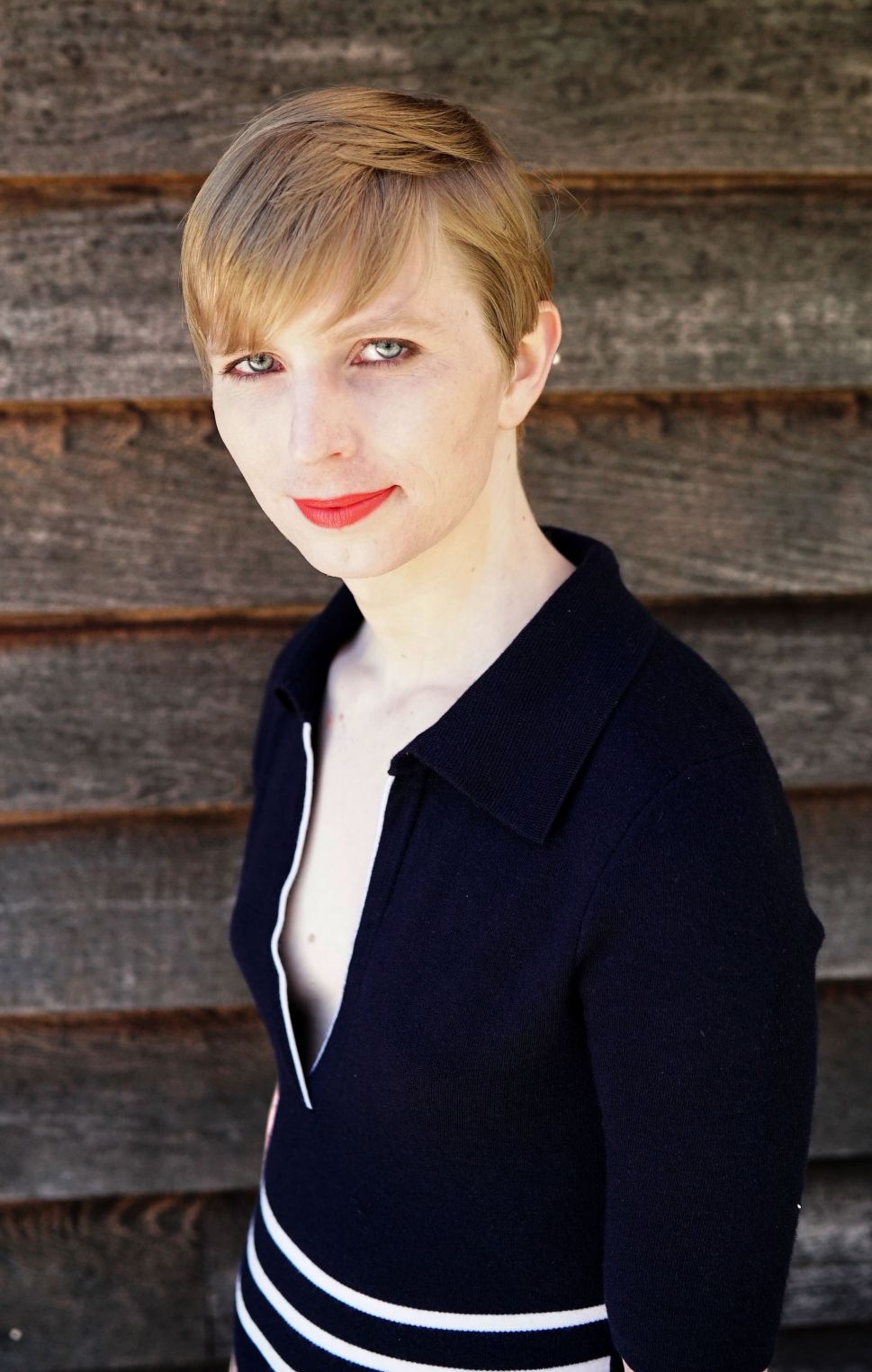