Writing Routines is close look at the craft of writing, through the eyes of its very best practitioners. Sign up to download our free guide “12 Essential Writing Routines To Help You To Craft Your Own.”

For anyone who writes, it is the absolute toughest and most nausea-inducing moment of the day: the minute you reach your desk to compose your first words.

The screen is blank. The cursor blinks and mocks you. Imposter syndrome creeps in. What if it’s just plain bad? What if I can’t produce anything? What about that time I got a C on that English paper—maybe the teacher had it right, and this has all been one long con? The physical feeling is as real as the thoughts in your head: You feel the pit of your stomach drop. No matter how long writers have been at their craft, nearly every writer we’ve spoken to feels some version of this.

In short, those first few moments aren’t pretty or pleasant.

But somehow, in the face of those voices and thoughts, the pros get through it. They have to; many of them don’t have a choice. They are writing on deadlines. Or they are speechwriters, and if they don’t write, the event blows up. Or they are in the middle of a contract for a book and article—and their payment depends on getting the words out and onto the page.

Part of what they do is establish clear habits and routines—a set of practices, from the mundane to the idiosyncratic, that allows them to shut up those negative voices and grind out the words. They build systems, some as intricate and complex as any piece of computer software. The best writers aren’t gamblers. They don’t wait for inspiration to strike. If the apple doesn’t fall from the tree, they climb up it and grab it. And they overcome these moments of self-doubt and difficult often enough and long enough that we thought they might have something to tell us about it.

So what exactly do they do to get going?

Alright, so it’s not the most off-the-wall tool—but a healthy majority of the professional writers we’ve spoken to use coffee to get the creative juices flowing. The prize-winning historian Andrea Wulf admits that, “I can’t start without a proper coffee made on my magnificent Italian coffee machine.” Former Presidential counter-terrorism adviser and author (and novelist!) Richard Clarke was more blunt when asked what he does before he sits down to write: “Coffee, lotsa coffee.” And novelist Liane Maeby wasn’t shy either about the way her writing day begins: “After my 500th cup of coffee, I’m usually ready to go.” So go ahead: get the latte.

A good portion of the writers we interviewed said that silence was golden—that it was the only way they actually got work done, and more importantly, work that people would consume. Eric Barker, the author and behavior expert, put it like this: “When I’m actually writing sentences that people will read, I need silence. I really need to concentrate. I’d love to be one of those people who is so focused that they can write while in the middle of Mardi Gras, but I’m just not.”

Andrea Wulf confessed that 100 percent silence was necessary. “It actually drives me crazy,” she said, “when I work in libraries and someone even breathes too noisily next to me.” One author took it even further. For novelist Aaron Thier, the quest for silence was serious enough that he made an unusual purchase to help him achieve it: “I’ve lived until recently in noisy places, so I got a pair of construction-worker earmuffs. They work pretty well.”

Not all the writers we interviewed needed a vacuum of sound. Some actually preferred music—but even these choices were deliberate and a little more out there than you might expect. The consensus seems to be that music is chosen less for pleasure than for a specific purpose.

These writers aren’t just hanging out and bobbing their heads. The music choices reflect what they’re trying to do. Speechwriter and author Rob Goodman is clear on what kind of music he’ll listen to: “If I need to drown out background noise, I’ll listen to some classical music. I’m particularly a fan of Handel, but the important thing is that the music can’t have words, or else I won’t be able to concentrate at all.” For Richard Clarke, “Music is a must, usually jazz but sometimes classical, even Gregorian chants.” Tyler Cowen listens to Renaissance music, which even he admits “otherwise hardly ever listen to” but it’s a choice that helps his writing. “It is less disruptive in terms of rhythm,” Cowen said.

4) Use the same tools—for a long time.

Steve Jobs has his signature black turtlenecks. Barack Obama wore the same two suits, day after day. Writers can borrow the idea of consistency behind those quirks. For novelist Aaron Their to get his writing done, he uses the same Bic pens—and not the same type of pens either. Thier has been using the exact same pens he purchased a decade and a half ago. “I bought one package at a CVS fifteen years ago and a handful are still good,” he said, “They’re the clear plastic ones with the ridges, not the opaque white ones. I should write to Bic and tell them. I don’t know what I’ll do when they all run out.” Bic, if you’re listening…

5) Warm up not by writing, but by reading.

Rob Goodman does something professionals do in other fields: He lowers the stakes of the first part of his workday. He makes his start to the writing process less terrifying by reading, not writing, as a way to get into the day. As he says, “My favorite part of the work day is sitting down with a cup of coffee to read whatever book I happen to be reading for fun. Things seem less daunting when I can start off with something I’m really looking forward to.” What could you introduce to start your writing process that would make it less frightening?

6) Consider writing in the dead of night.

Liane Maeby cherishes the silence that helps her write. But with the chatter of the online world and the physical one too, she finds that the best way to find that silence and get her fiction writing done is to do it when she cannot be reached: in the middle of the night. “I need to be alone to write fiction, for I am a fragile flower — and the more utterly alone I am, the better,” she admits. “In the middle of the night, there are no distractions. I can get myself to a place where I feel like I’m the only person in the world who’s currently conscious, and that frees me up to be a little more vulnerable and experimental.”

7) Have the first words ready, or almost ready.

Richard Clarke doesn’t sit down to write empty-handed (or empty-minded). He’s thought about his first few lines before fingers hit the keys, so he’s off to a running start. “I usually already have the opening lines or paragraphs in my mind and have had for hours before I start writing on a given day,” he said. It’s a useful strategy for all of us: come to the table with something—anything!—and you know you at least have that first rock to jump across the river. Jumping to the next one will seem less daunting.

8) Make sure you know what you want to say—definitively and clearly.

For Pulitzer-Prize winner Annette Gordon-Reed, the key to overcoming those early hesitations and writer’s blocks is to know exactly what she wants to say. If she doesn’t know, it might mean that she has to go back to the research instead of write: “When I have writer’s block it is because I have not done enough research or I have not thought hard enough about the subject about which I’m writing,” she said, “That’s a signal for me to go back to the archives or to go back into my thoughts and think through what it is I am supposed to be doing.”

9) Don’t wait for anything else to interrupt your day.

For Cal Fussman, the trick to getting going is to take the energy he has at the start of the day and just get writing—even if it means saving everything else (including showering!) until later. It’s a strategy he borrowed from Salman Rushdie: “I remember Salman Rushdie telling me how he gives it the first energy of the day. As soon as he gets up, he goes to his office and starts writing. He’s still in his pajamas. He believes there is a ‘little package of creative energy that was nourished by sleep’…He works for an hour or two and then goes to brush his teeth. I have a very similar approach. Only I brush my teeth before I start. I guess that’s my pre-writing ritual.”

Jimmy Soni is the co-author of A Mind at Play: How Claude Shannon Invented the Information Age and Rome’s Last Citizen: The Life and Legacy of Cato. 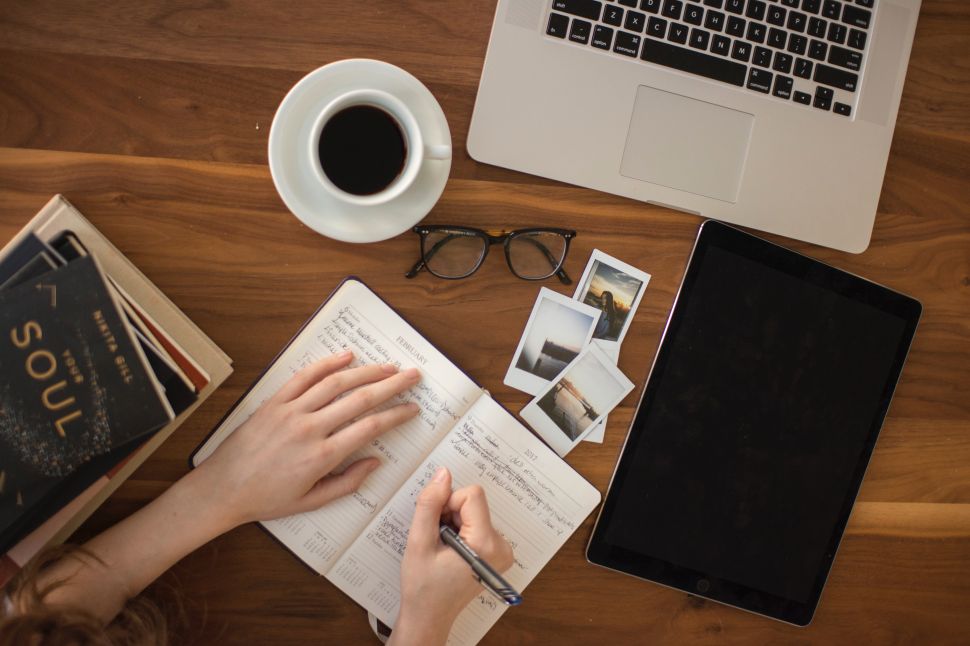