Today we commemorate the 16th anniversary of what Al-Qa’ida termed its Planes Operation, the most consequential terrorist attacks in history. That operation left 19 dead jihadists, 2,978 dead innocent victims, plus thousands of injured. Not to mention the World Trade Center complex annihilated, four jetliners destroyed, the Pentagon badly damaged, and a nation changed forever.

In Lower Manhattan and at the Pentagon—all rebuilt with appropriate memorials to that day—the usual solemn 9/11 remembrances will take place. Those who recall may think back, briefly, to that sunny Tuesday morning when the world changed. Some will speak of it. Just as my parents and their friends once bored me with their exact memories of where they were on November 22, 1963, when President John F. Kennedy was assassinated, now my friends and I bore our children with precise recollections of 9/11.

With the passing of time we can see the Al-Qa’ida Planes Operation and its impacts with a clarity that was previously out of reach. In the months after 9/11, when shock turned to an outrage that birthed a national unity which proved as intense as it was fleeting, a new era dawned for America in a long-term struggle against Islamist terrorism and extremism. How has that conflict panned out over the last 16 years?

In the first place, it ought to be noted that our Intelligence Community has done a commendable job of keeping mass-casualty terrorism away from our shores since 9/11. In particular, FBI-NSA teamwork, in near-seamless collaboration with close foreign intelligence partners, has foiled hundreds of terrorist plots “left of boom” as they say in the spy trade. Jihadists have executed exactly zero “big wedding” attacks in the United States in the last 16 years—and it’s not for any lack of trying.

Indeed, since 9/11 the FBI-NSA counterterrorism partnership has grown so effective at stopping jihadists before they kill that civil libertarians routinely complain that many of these would-be terrorists are harmless ne’er-do-wells and fantasists entrapped by government informants. This is a by-product of the success of our domestic counterterrorism in recent years.

Although jihadists, usually self-styled, have killed Americans at home since 9/11, most of these terrorists have been inspired—not directed—by violent co-religionists overseas. In a typical case, the worst of these attacks, the June 2016 slaughter at Orlando’s Pulse nightclub, killed 49 innocents; yet their murderer, Omar Mateen, a native-born American citizen, despite clearly being inspired by the Islamic State, was not directed by them except in his own diseased mind.

The rise of that Islamic State, at the expense of Al-Qa’ida, is another by-product of our counterterrorism successes since 9/11. The global terrorist franchise that attacked our homeland spectacularly 16 years ago isn’t out, but it’s unquestionably down. Most of its superstars who helped plan and execute the Planes Operation are long dead or in custody.

Most famously, Osama Bin Laden himself was killed by U.S. Navy SEALs at his Pakistani safehouse in May 2011, after a near-decade of worldwide manhunting by our spies and commandos. Since then, his long-serving number-two, Ayman al-Zawahiri, a man with an indisputably mysterious past, has had a tough time getting Al-Qa’ida back into the top tier of the jihadist game.

The leading architect of 9/11, the jihadist entrepreneur Khalid Sheikh Muhammad, has been in our custody since 2003 when he was arrested in—yet again—Pakistan. Although there remain important unanswered questions about KSM (as he’s known in counterterrorism circles), nobody powerful in Washington over the past 16 years has ever seemed eager to answer them. This is something of a pattern in our Federal bureaucracy, which displays odd incuriosity about unraveling the full dimensions of major terrorist attacks—whether they include jihadists or not.

Much of Al-Qa’ida’s energy and prestige in Islamist circles has been absorbed by the Islamic State—although that group, too, is under serious military pressure in Iraq and Syria, led by the United States. All that can be stated with certainty is that the Al-Qa’ida Planes Operation has never been replicated, which says something important about our counterterrorism efforts since 2001.

For lack of other options, jihadists worldwide have resorted to self-starting terrorism in the West, including the United States. These small, often individual attacks have none of the political, economic, and social impacts of 9/11. Indeed, unless you’re one of the unlucky few to be killed or maimed by these “just do it” jihadist attacks, they resemble a nuisance more than a serious threat to our way of life.

We shouldn’t rest on our laurels, however, since there’s been plenty of waste and stupidity in American counterterrorism over the last 16 years. Most egregious, perhaps—because it impacts so many citizens daily—is the awful Transportation Security Administration, which represents a perfect expression of the desire for security theater over actual security. Nevertheless, since TSA creates jobs in almost every Congressional district in the country, we should not expect it to be seriously reformed—much less disbanded in favor of a serious airline security program—anytime soon.

That said, the malignance of TSA pales in comparison to the disastrous wars of choice that we have waged in the Greater Middle East in the years since 9/11. Although the improvised invasion of Afghanistan less than two months after the Twin Towers fell was moral and necessary, and the sudden fall of the Taliban at the hands of hardly more than handful of our Special Forces and CIA operatives was undeniably impressive, it was a one-off rather than a template for future success.

Kicking the Taliban out of Kabul was a classic “punitive expedition” that was unwisely allowed to mission-creep itself into a long-term exercise in what we euphemistically (and inaccurately) term “nation-building.” In practice, this has amounted to attempting to make Afghanistan not Afghanistan, and it has panned out exactly like every other foreign effort to do so has for the last 2,300 years, when Alexander the Great had a crack at it. Nevertheless, President Donald Trump, who campaign strongly against our Middle Eastern misadventures, has proven unable to extricate our military from Afghanistan, now the longest war in America’s history by far. Our doomed campaign in that country has become a multi-generational effort that nobody in Washington seems to have any clue how to get out of.

Our invasion of Iraq in the spring of 2003 was less moral and even less wise. Indeed, sage strategists were cautioning against such a move before it happened, to no avail. While there can be no denying that Saddam Hussein was an awful despot with enormous blood on his hands, all that evicting him from power accomplished was handing Iraq over to surrogates of Iran, which guaranteed decades of multi-sided civil war. This, too, was easily predictable – and was predicted by some in our Intelligence Community before the Iraq invasion kicked off – but nobody listened. Reality cut no ice in the heady post-9/11 spirit of waging aggressive war in the Middle East to magically solve our jihadist problem.

Aside from the enormous damage to America’s power and prestige caused by the strategic hash that we’ve made of our occupations of Afghanistan and Iraq, there have been vast opportunity costs as well. After a decade-and-a-half of down-punching against insurgents in the Greater Middle East, our army is profoundly unready for war against any sort of peer competitor. There’s ample evidence that the U.S. Army—which has focused on counterinsurgency for a generation at the expense of almost everything else—is seriously outclassed by the Russians in critical areas such as electronic warfare and artillery. Any fight against the Russians would deliver unpleasant surprises for American troops.

Not that our navy looks any better. Our endless wars in the Middle East have starved our military for funds, while engendering magical thinking and strategic escapism, and as a result the U.S. Navy seems to have lost the basic ability to sail and navigate without colliding with other ships. Considering that our navy is the guarantor of freedom of navigation for global trade—not to mention the main deterrent against Chinese adventurism in the waters off East Asia—none of this bodes well for worldwide peace and security.

Then there’s the all-important matter of nuclear proliferation. Every dictator on earth got the clear message in 2003 that if you don’t possess weapons of mass destruction, Washington may decide to regime-change you at America’s whim. What you really don’t want to be is Saddam Hussein, who managed to convince his enemies that he had WMDs—when he actually didn’t.

As if that lesson weren’t already indelibly clear, the ignominious downfall of Muammar Gaddafi in 2011, at the hands of NATO-backed rebels in his native Libya, added detail. Having watched Saddam’s downfall, the once-rogue dictator opted to get on the right side of Washington in late 2003, giving up his WMD program and quietly cooperating in America’s war against jihadism.

He kept his word, played by Washington’s rules, and assisted in our fight against Al-Qa’ida, though this did Gaddafi no good when he faced a rebellion, which NATO assisted with airstrikes and military aid. Gaddafi ended his life in a sewage ditch, taunted by rebels who shot him in the head while sodomizing him. Nobody got the message here—that America doesn’t keep its word so never, ever give up your WMDs—more clearly than North Korea, which found itself placed in George W. Bush’s absurd “Axis of Evil” a few months after the Planes Operation. We are currently engaged in alarming nuclear brinkmanship with Pyongyang, which is determined to not repeat the strategic mistakes of Saddam’s Iraq or Gaddafi’s Libya. It should be no surprise that North Korea has zero interest in parley with America regarding its nuclear weapons. This daunting geopolitical crisis may be the most important legacy of 9/11. 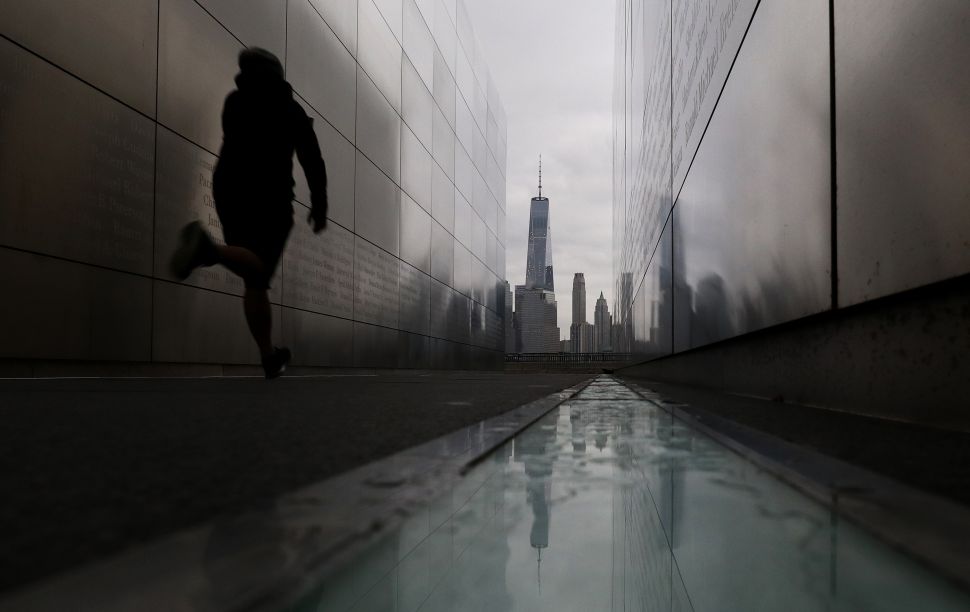