Once again, pundits underestimated a country’s support a far-right party. What’s going on in the West? All in the last year, an ultraconservative party rose in France, Britain voted to leave the EU, populism resulted in a shock election in the U.S., and now German voters have provided the strongest support for an extreme right party since 1961.

How the “Alliance for Germany” Confounded the Experts

Those seeking answers have pointed to traditional parties making mistakes, racial tensions, and some allege that Russia is to blame for it all. Some or all of these factors may be true, but the biggest thing France, the UK, the U.S., and Germany have in common is that voter rage is fueled by being left behind economically with free trade policies (AfD started as an anti-European Union party) and jealousy at being surpassed by immigrants who they perceive are receiving more attention and care. Across the board, voters feel that the major parties care little for their plight.

AfD, or “Alliance for Germany” at first didn’t seem like more than a blip on the political radar in Germany. And why should it? Parties that don’t make five percent aren’t seated in the legislature, a postwar tactic in Germany’s “Basic Law” system designed to sap the strength of extremist parties. Polls showed the party slipped from last year’s high to just above that 5 percent threshold in the 2017 campaign season, leading the bigger parties to not consider the party a threat. But now that it received 12.6 percent of the vote, AfD is the third largest party in the Bundestag, Germany’s lower house in the legislature, where much of the lawmaking power resides.

Where the Populists Roam

It would be an oversimplification to say that AfD won support due to backlash against refugees. Germany has been admitting refugees for quite some time, and no vote like this has occurred in that time frame. Further, results show that AfD did twice as well in East Germany than West Germany.

This story has played out across the continent and the Atlantic. Marine LePen’s “National Front,” the far-right party in France, was able to tap into bitterness in regions where French industrial workers were taking it on the chin. Parties like the French Communists had declined in power since the fall of the Berlin Wall and French Socialists became pro-EU moderates, depriving these blue collar workers of their voting ally and protest vote. Refugees were being resettled where it was cheapest to do so—right in these ignored industrial regions.

Brexit voters despised the moderate, pro-globalization Prime Minister David Cameron and had residual anger from being left behind in the country’s free trade policies (which hurt the proud but declining fishing industry) and liberal stand on immigration. Brexit wasn’t a  reaction against non-whites; it was motivated by a fear of being left behind and overtaken by refugees who got all the attention and resources.

In the U.S., a reading of J. D. Vance’s book Hillbilly Elegy reveals Americans felt bitterness as people from Kentucky and West Virginia moved into the country’s industrial heartland in search of a better life only to get burned as America signed free trade deal after free trade deal. Democrats who used to defend these industries and unions received money from companies that benefitted from globalization, robbing these Midwesterners of a party that represented their views. Thus, it’s no surprise that so much of the Midwest manufacturing flipped in the 2016 election from Democrats to Republican candidate Donald Trump, who promised a comeback.

From Dignity to Disgrace Among East Germans

If Germany’s 2017 election sounds like a chilling echo from Germany in the 1930s, it should. At one point, East Germany was a proud country. It was an industrial powerhouse in the Warsaw Pact and won more medals than the United States at the 1976 Olympics in Montreal.

The country’s brutal totalitarian system collapsed with the Berlin Wall. West Germans and West Berliners partied with a few from the East, while others were stunned by the sudden fall of their regime that taught them to obey with ruthless discipline.

In Germany’s reunification negotiations, West Germany imposed terms that seemed like a conquest over a defeated rival. The smaller rival that threw in its lot with Communism was forced to act the part of loser, just like Southerners during the post-Civil War Reconstruction Era. What choice did they have against NATO and European Union?

Second-Class Citizens in Their Own Country

Staying in East Berlin 10 years ago, I sensed seeds of this rebellion. I was one of several speakers to address a conference in Potsdam, the site of the postwar peace agreement that divided Germany. Though unification was over, the capital still seemed divided. Our West German conference director chastised the East German family who ran the bed and breakfast where I was staying for getting my room ready late. “These East Germans,” he snapped, launching into a list of their shortcomings. The family looked sullenly back at him. They may not have understood English, but his rant contained an all too familiar tone. I tried a reassuring smile and a little bigger tip, but it didn’t overcome the bitterness.

Jogging through East Berlin, the place looked like a country being passed by. The people weren’t destitute, and the buildings weren’t in ruins, but they had the look of last year’s model. One could see it outside Frederick the Great’s Palace in Berlin. I wanted to purchase one of those toy model cars that East Germans made, the “Trabant,” a clearly inferior car to what was made in West Germany, just for laughs. But they were all sold out, as East Germans snapped up all the Trabants they could, years after abandoning them. “Why don’t you get one of these BMWs or Mercedes cars?” the vendor sneered, obviously aware that I was a Western tourist. No East German wanted to touch those cars when making purchases for their kids, even if they were better.

Germany, under the West’s control, launched a series of economic policies designed to strengthen the European Union and its own economy, reducing tariffs and barriers to trade that once protected East German industry. Their liberal immigration laws made them a top destination for Syrian refugees, and they took in many of the best and brightest from that war-torn country. Suddenly, East Germans faced the real prospect of being third-class citizens in their own country, behind their West German counterparts and these talented refugees. The fact that many were Muslims made them an easy target for the largely Christian country.

Enter AfD, which stoked fears and blamed these problems on the traditional Christian Democrats and Social Democrats (who became unified by pro-globalization policies) and refugees. Plus, the party appeals to younger voters who have no memory of the Nazi Party (which has been largely expunged from the history books) and no knowledge of the brutal East German Communist Party and their dreaded Stasi, the secret police. Even though Angela Merkel is an East German, many of these voters abandoned her policies.

The parallels are eerie. Where there was a fallen Weimar Republic that produced Adolf Hitler, there was the disgraced East German regime. Where there was resentment toward Jews, it’s now toward refugees, not always the poor huddled masses in the eyes of jealous East German voters. Instead of a post-World War I humiliation, the country went through a post-Cold War shame. The story plays itself out in France, Great Britain, and other Western democracies where the dying industries and their workers are kicked to the curb.

Is There a Solution?

That AfD had such a strong showing is a stark warning to complacent Western democracies and their ruling parties. But one does not have to fear that history will repeat itself just yet. The good news is that many of these new parties in Europe are undergoing severe growing pains, as seen with Marine LePen’s party and the United Kingdom Independence Party, which led the Brexit charge. Each became victims of their own surprising success. Even the AfD is in turmoil.

Westerners worried about these rising extreme parties have a narrow window to organize themselves and reorient toward helping those who feel left behind. But time is running out, and angry voters aren’t getting any less mad, even if their parties are struggling to sort it all out. 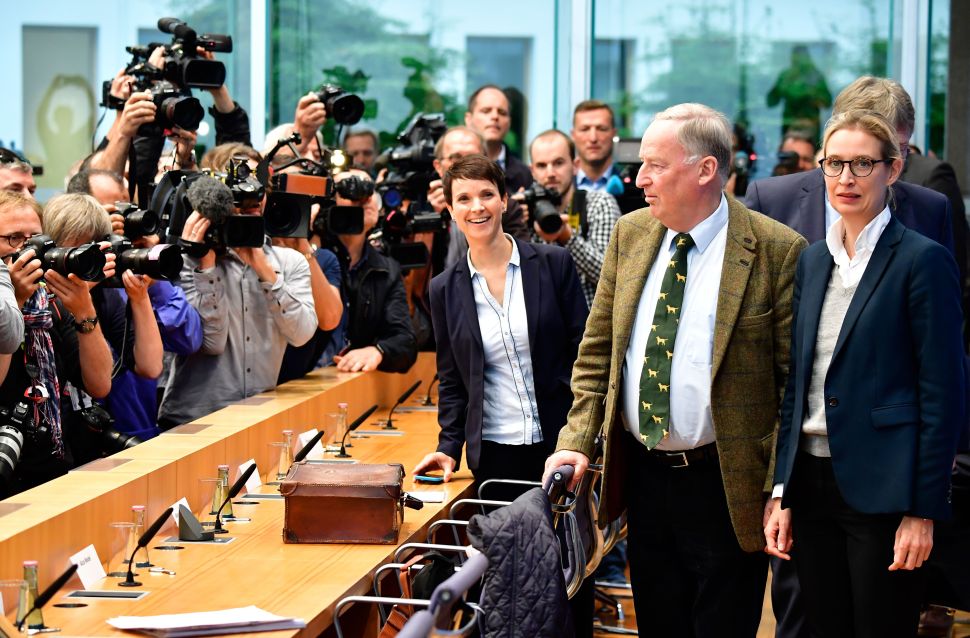