Most of us have a deeply flawed understanding of metabolism. If you need proof of that, Google “how metabolism works” and watch as page after page of tips on how to boost the m-word and lose weight stack up. This idea — that metabolism is inherently tied to gaining and losing weight — is not wrong. But it does miss the forest for the trees. Metabolism is the sum of every chemical reaction that happens inside the body, an enormous web of interactions on the molecular level that aim to keep the organism (you) in what biologists call homeostasis: a state of balance, best illustrated by our near constant body temperature, that persists even in a wide range of circumstances.

Scientists categorize most of the chemical reactions that make up metabolism into two processes that happen simultaneously and constantly. In catabolism, large molecules (many from food) are broken down to extract energy and their smaller molecular building blocks. In anabolism, the energy acquired is used to assemble those building blocks into something biologically useful like tissues and organs. This is a delicate balancing act, and a constant effort by your body to produce the right amount of energy and the right raw materials to survive. Along with your genes, metabolism and the inputs that influence it make you who you are. While it doesn’t have the same familiar ring as “you are what you eat,” “you are your metabolism” is much closer to the truth.

For people looking to make healthy decisions, knowing that metabolism is more than a lever for losing weight is an important step toward a holistic understanding of the way the body works. This primer will get you started. 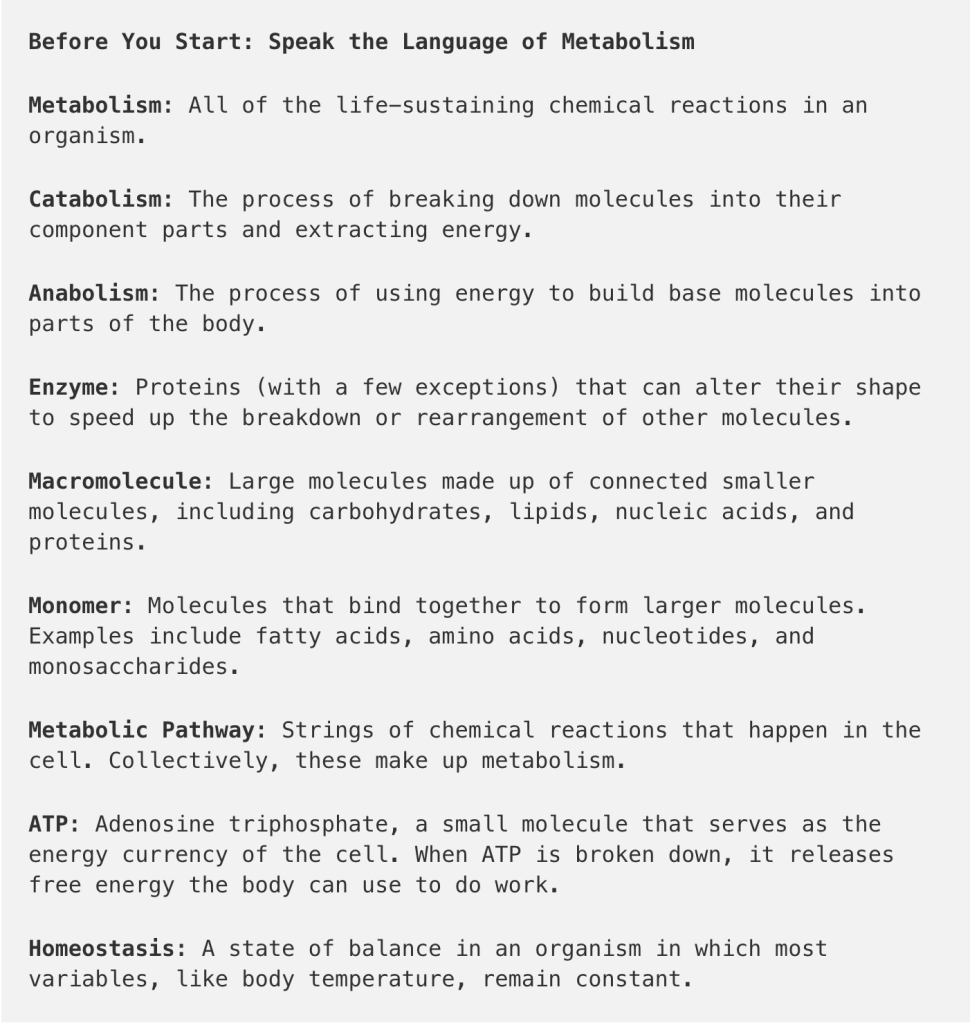 Digestion is actually the important first step that takes you from chewing your food to absorbing valuable molecules in the intestines. Catabolism begins inside the cell, once the large molecules (also called macromolecules) like carbohydrates, fats and proteins — the basic components of a piece of food — get broken down further into their building blocks. Those are called monomers and they include fatty acids, amino acids, nucleotides, and monosaccharides.

This all happens in strings of chemical reactions called metabolic pathways, where enzymes react with a molecule and then pass it off to another enzyme for the next reaction, like an assembly line, until ultimately there is a product that’s used or stored. During many of these reactions, energy is released the form of adenosine triphosphate, or ATP, a small molecule that’s the source of energy for most biological process in the body. The end result is a bunch of these molecular building blocks of the food you ate, plus ATP, all of which get used in the other half of metabolism: anabolism.

Anabolism uses many (but not all) of the same enzymes and metabolic pathways that catabolism does. This means many parts of catabolism and anabolism happen simultaneously within the same cell. During anabolism, enzymes use the ATP-based energy unlocked during catabolism to combine the monomers back into larger macromolecules that are used within the body as the materials of living cells, from organ tissue to bone and muscle.

The important thing to remember is that metabolic pathways are part of an intricate system (you can see the whole thing here) with the fairly straightforward goal of keeping you in balance given the constantly-changing environment, which includes the amount of food you eat, how much you exercise, and many other factors. This network of ongoing reactions is the foundation for all growth. Another way of thinking about reactions on the molecular level is by comparing them to your own behavior on the surface level. When you get cold, you put on another layer; when you go for a run, you get thirsty and drink . Likewise, the chemical reactions that make up metabolism react to their conditions on the cellular level to keep you humming along.

How Does Metabolism Affect Your Health?

Remarkably, the body will make do with a variety of circumstances and still find a way to function well, but giving it the wrong amount of inputs — or the wrong ingredients altogether — puts stress on metabolic pathways. Let’s say you eat a bowl of sugar at every meal. The body will create energy efficiently in the form of ATP if it needs that energy. If not, it can re-route the base molecules of the carbs, fats, and even proteins that you eat along different metabolic pathways that focus on storage, rather than energy creation — the result of which is adipose tissue, or body fat. Not only will all of that sugar likely end up being stored as fat, it can also put stress on metabolic pathways, making them work less optimally over time. Enough of the wrong inputs can lead to metabolic disorders, including insulin resistance, which is a risk factor for diabetes.

Food and the nutrients they contain are the core of metabolism, but they’re just one of many variables that affect it. For example, metabolism is closely (and complexly) tied to circadian rhythms, the biological processes linked to a 24-hour cycle. While the relationship isn’t completely understood, studies in animals show that disrupting the normal day-night cycle by interrupting sleep or eating throughout the night can cause metabolic disorders. And then there’s your age, your genes, stress levels, and whether you exercise(and when) — all of which affect metabolism. That’s because organisms, like humans, don’t exist in a vacuum, and neither does our network of chemical reactions that constitute metabolism.

While the idea of a complex web of chemical reactions can be daunting, it’s also empowering. Spend some time getting to know how metabolism really works, and the relationship between specific pathways and their surface-level outcomes, and you’ll be better positioned to influence your long-term health.

Jeremy Berger is the Director of Content for Elysium Health, a consumer health company that translates advances in science and technology into clinically-validated health products. He works with a team of writers and scientists to create stories that make sense of complex topics in health and science. Read more at endpoints.elysiumhealth.com and follow on Twitter @ElysiumHQ. 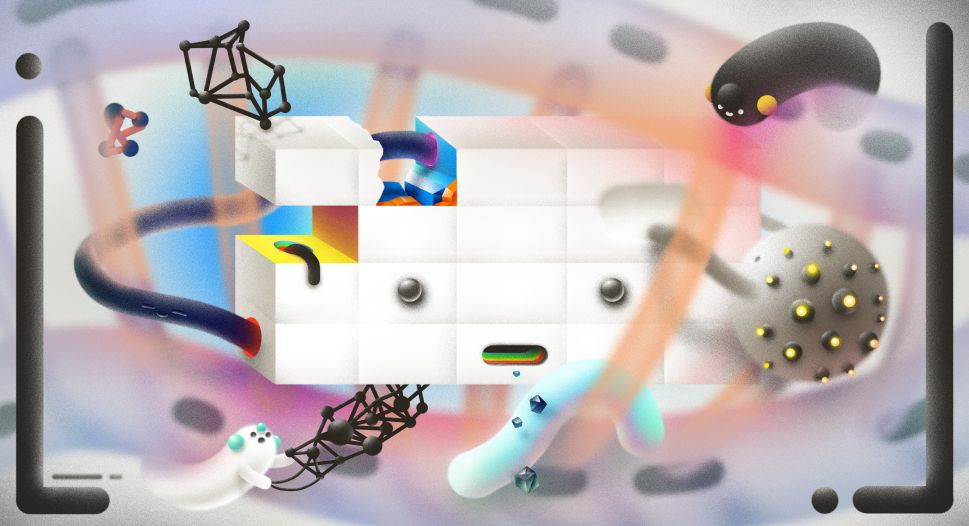