A few weeks ago, while mocking Rachel Maddow of MSNBC, Sean Hannity of Fox News Channel called Maddow “one of the leaders of the alt-left, propaganda, destroy-Trump-at-all-costs media.”

“Not a day goes by,” Hannity said, “without Maddow floating some sort of Trump-Russia conspiracy theory.”

In addition, Hannity now imitates Maddow’s hand gestures after he shows them on screen. This amuses Laura Ingraham, a frequent Hannity guest who is about to become much more.

“It’s a very interesting pattern of gesticulation on the part of Rachel Maddow,” Ingraham told Hannity. “I think we need, like, a body-language expert in to just completely reveal what’s going on in her mind. I think she’s kind of fun. If I were a liberal, Rachel Maddow would be all the rage.”

Beneath Hannity’s simplistic insult and Ingraham’s back-handed compliment, both might sweat and fret a little in the coming days and Maddow is the reason.

If numerous reports prove true, Hannity’s predictable and tired old show will move from its current 10 p.m. hour to the 9 p.m. slot to compete—head-to-head—against Maddow. And Ingraham will start a new show where Hannity used to appear.

If recent ratings trends continue, Maddow might draw a larger audience than Hannity. If it happens, it will mark a glaring example of the decline of a right-wing propaganda factory that is embroiled in a series of sex scandals and the resulting exodus of star personalities.

And if Hannity proves a weakening lead-in for the 10 p.m. hour, it could hurt Ingraham’s chances against the experienced and savvy Lawrence O’Donnell on The Last Word on MSNBC.

A Hannity loss to Maddow would be part of a losing streak at what is still the most-watched network among the three cable news competitors. It started in the summer of 2016 when Fox lost its emperor, Roger Ailes, in a sexual harassment case.

Bolling’s show, The Fox News Specialists, was canceled last week and he was banished from the network. A day later, Bolling’s son died. Some news outlets reported the younger Bolling succumbed to a drug overdose; others said suicide.

Because Bolling’s 5 p.m show was canceled, Fox plans to move the lightweight panel chat “The Five” back to 5 p.m. from its inappropriate 9 p.m. slot. Fox could have moved Ingraham into 9 p.m.to compete woman-to-woman against the formidable Maddow.

Instead, viewers get Hannity, who generally chants the same authoritarian cadences every night and points his finger at “You, the American people” while trying to make Donald Trump’s agenda sound rational.

Maddow is different. She doesn’t shout at the camera. Unlike Hannity, she actually breaks real stories and finds patterns in different events, particularly related to the Russian espionage in the 2016 campaign on behalf of the amateur president.

Hannity—like Ailes and O’Reilly—is a pal of Trump. So Hannity ignores the Russia story and calls it “fake news”—just as Trump does—no matter the growing pile of evidence against Trump and his cronies.

Judging by audience size, the viewers are increasingly turning to Maddow’s version of the truth. In total viewers, Maddow ratings (at 9 p.m.) have beaten Hannity’s (at 10 p.m.) in March, May, July and August, according to MSNBC, which says Maddow also leads him in September.

In the advertiser-friendly demographic of ages 25 to 54, Maddow has beaten Hannity every month since March—six straight—and leads in September, MSNBC said. Maddow also has defeated The Five in both measurements for the last four months.

But it will be harder for her to beat Hannity head-to-head in one of most-watched hours of the 24-hour news cycle. While Hannity’s network has a monopoly over easily-duped and fact-deprived Trump supporters, Maddow and MSNBC lose a section of the reality-based audience to CNN.

At 10 p.m., along with O’Donnell, Ingraham would compete against CNN Tonight with Don Lemon. In anticipation of Ingraham’s new role, the liberal watchdog Media Matters compiled a list of some of Ingraham’s recent comments on radio and TV.

Annoyed by a focus on climate change from the Pope and the Catholic Church, Ingraham asked “Aren’t they supposed to be saving souls, not saving trees?”

One of her favorite topics is minority groups, although Ingraham said “I don’t think of Jewish people as minorities because they’re so successful.” Her opinion of Mexicans is not so lofty.

“They have come here to murder and rape our people,” Ingraham said. “We know that.”

In reference to Spanish-language networks Univision and Telemundo, Ingraham called them “left-leaning media outlets” that “revile the American experience.”

One of the best things about her is that she’s one of Hannity’s better guests, unless you count Herman Cain and Ollie North. The irony of all this is that Hannity was in this very time slot years ago before Kelly bumped him back.

Perhaps, when Hannity makes his debut in his new time slot, he can perk up his guest list with an exclusive interview on opening with his hero, the president of the United States, “Mis-tah Trump,” who used to host his own reality show. Think of the ratings! 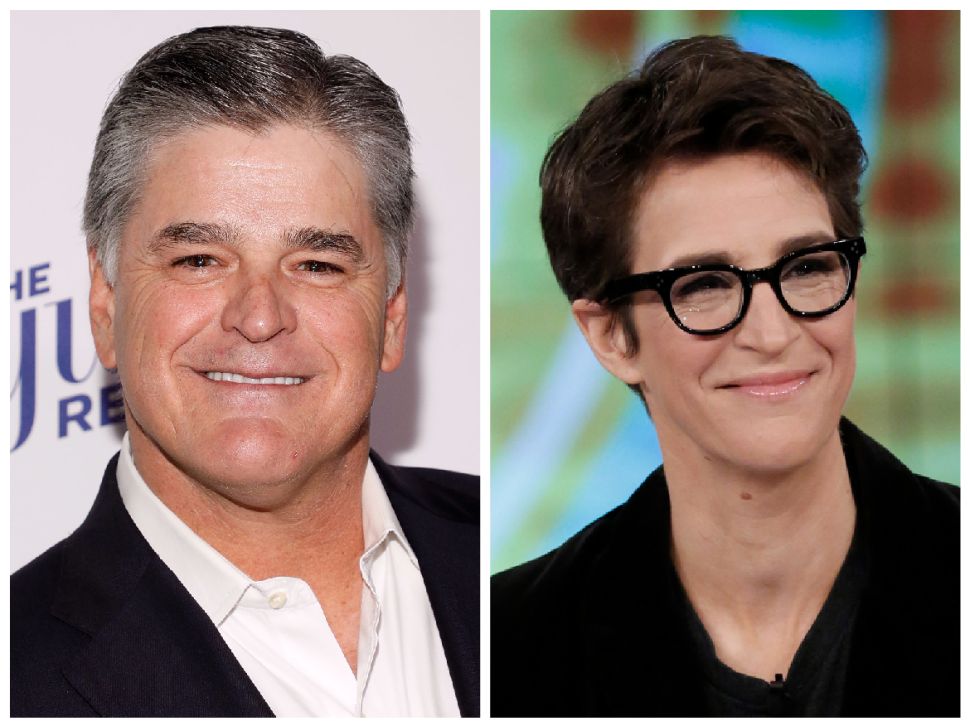