If there was a post-breakup silver lining for Issa, the main protagonist in HBO’s Insecure, it might have been the extra closet space she got when long-time boyfriend Lawrence packed up and moved out. We saw her glumly realize the space had been vacated right before the credits rolled on season one. But in season two (the last episode of which will air on Sunday, September 10) audiences have watched her climb back on the dating train, and that has meant a lot of cute first-impression outfits.

While not a complete wardrobe overhaul (T-shirts, hoodies, and pop-culture references still abound), her style has definitely evolved. Costume designer Ayanna James has emphasized the changes in the character’s life by introducing a number of fun ensembles for nights on the town over the past few weeks.

Insecure has fans clamoring to replicate looks worn by Issa and her BFF, Molly, making these women as much style icons as the long-adored and envied characters of Scandal and The Mindy Project. Watchers take to social media after almost every episode asking for advice on where to find a certain outfit or special piece. And luckily with Insecure it isn’t all high-end designers for splurge-only purchases. With a mix of high and low price points, the show regularly casts the spotlight on indie designers whose wares you can get your hands on without breaking the bank.

But there are also plenty of high-end designer items to swoon over. Molly, a lawyer, has a wardrobe filled with Cushnie et Ochs, Derek Lam and Jonathan Simkhai, sticking to a mostly neutral palette for her high-end office attire. And she’s been repping the very on-trend cold-shoulder dress fad of this season in Cushnie et Ochs at work; wearing a Tibi blouse at her parents’ vowel renewal, and in a denim number in the episode “Hella L.A.,” which apparently came from Insecure director Melina Matsoukas’s own closet.

Molly’s stunning Marco de Vincenzo dress that she wore in the episode “Hella Questions” was an excellent example of the way designers have been turning to stripes to update a classic look. Meanwhile in that episode, Issa’s attempt to show her ex how great she’s doing sees her donning a fabulous outfit that pairs a Bella Freud sweater with suede Theory pants in russet orange. It’s a great ensemble, but any dream of winning Lawrence back is wishful thinking on Issa’s part.

Though mentioning she’s broke at several points in the show, Issa still manages to stock her closet with items like Stella McCartney cat print pants. So while the show requires a little suspension of disbelief, the producers seem to make every effort to keep things plausible: Issa mentions picking up an item from a swap meet early in this season, suggesting she often finds second-hand ways of elevating her outfits.

And there are many affordable items from the show that you can easily find online, like this days of the week top that featured in the season two premiere, which is available from Teespring. Issa also often wears her political feelings on her chest, like with this this Huey P. Newton shirt—also in the premiere—from LA Raw; this Make America Gyrate Again T-shirt; her FBI Killed Fred Hampton sweatshirt by Rari Samo; and her American Hero Harriet Tubman hoodie from CRIME$. And for that“We Got Y’All” T-shirt, head to the HBO merch store.

For her dressed-up look, Issa goes for structurally unusual dresses paired with super stacked Gucci wedges that she can often barely walk in. James has consciously been trying to expand and highlight independent designers in this season telling Fashionista, “with season two, I really, really tried to get as much indie, and black and brown designers as possible.” The dress Issa wears to the super awkward dinner from this most recent episode is by Nigerian-based label Maki Oh; as is the top she wore in last week’s “Hella Blows,” wondering aloud if it looked African. Other designers featured in this season include Recho Omondi and Samantha B.

There are a number of ways to find out where the clothes you see on screen are from and it helps that James is very accommodating when fans ask. On Twitter, her timeline is filled with fan queries, though she suggests that you include a photo of the outfit in question if you’re reaching out to find out where it’s from. There are so many looks in one episode, it’s hard to keep track. Check out Ayanna James and Issa Rae on Instagram to follow along with Insecure style, and to see Issa’s red carpet looks, which are also styled by James. 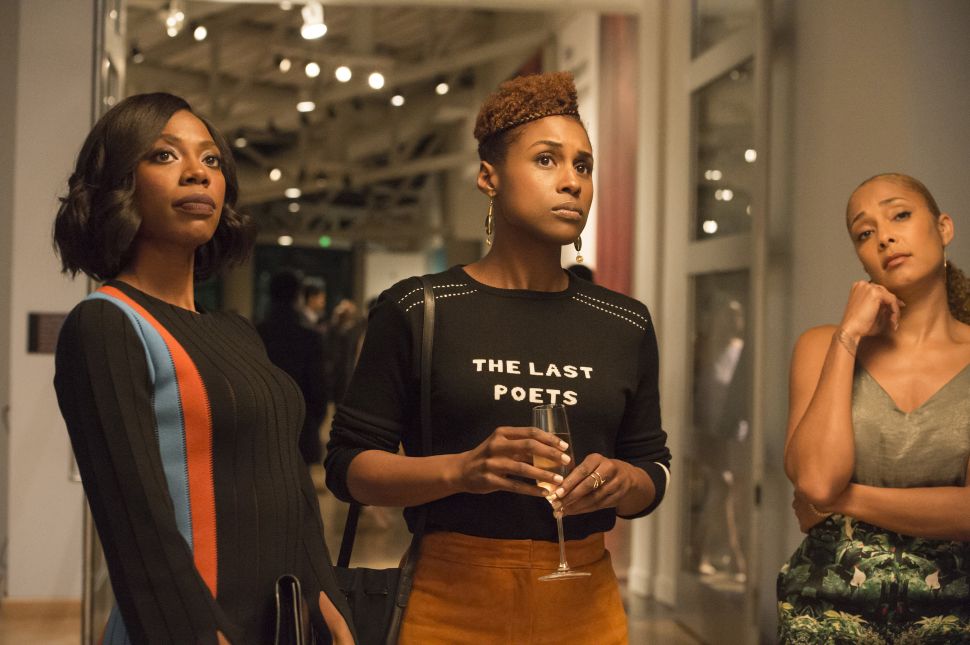