Striking the delicate balance between national sovereignty and defending international human rights is a daunting task the U.S. has sought to solve with policy-making and rhetoric since World War II. The brash nationalist address by President Donald Trump to the United Nations General Assembly on Tuesday did not deviate from the unapologetically unfiltered style of his campaign, as he promised that “The United States is ready, willing and able” to “totally destroy North Korea,” igniting international tensions by actively shying away from specifics. Trump, a “blunt instrument who understands he can occasionally use his bluntness to make real change,” as put by The Resurgent’s Erik Erikson, creates an unsettling gray space between his words and the lack of a plan behind them. Without a clear course of action, international tensions inevitably breed in the discourse.

“If the righteous many do not confront the wicked few, then evil will triumph,” Trump said, proceeding to outline the horrors of the oppressive North Korean state while providing little suggestion as to how he plans to combat it. “Rocket man is on a suicide mission,” he remarked in reference to Kim Jong-un and his regime’s nuclear missile testing. Trump’s language regarding North Korea was indeed blunt, but it lacked a certain sharpness. There was no point and no feasible strategy, other than to inject more fear and confusion into the international conversation. By alienating allies with cries of nationalism on behalf of the “nation-state,” Trump’s threats leave more questions than answers. Ironically, this is the exact dilemma he promised to avoid with his “anti-political” political campaign.

The void between rhetoric and action appeared again in his denunciation of the Iran Nuclear Deal. He called the deal “an embarrassment” without suggesting a resolution. He used his address to the United Nations as an opportunity to appeal to allies for reopening the deal, bidding in favor of renegotiating talks to impose further sanctions. In a clear show of obstinacy, Iranian President Hassan Rouhani called the deal a “closed issue” on Wednesday. Rouhani warned that if the United States were to pull out of the agreed upon sanctions, the country could continue its uranium enrichment program.

The future of relations between the United States and Iran is unclear, but Iran’s position on the issue is crystal.

“We see today the Americans are seeking an excuse to break this agreement,” Rouhani remarked to the UN General Assembly in his own address. He reinforced that making further negotiations with “an American government that tramples on a legal agreement would be a waste of time.”

In addition to the alarmingly harsh yet vague threats to North Korea and Iran, the underlying subtext of his speech leaves human rights advocates cause for concern. In particular, Trump’s statement that “All responsible leaders have an obligation to serve their own citizens, and the nation-state remains the best vehicle for elevating the human condition,” raised eyebrows.

“What’s particularly concerning is the fact that President Trump seems to think that people have interests and nation-states have rights—a concerning indication of a foreign policy that prioritizes the will of the majority and could be used as a shield from scrutiny and transparency,” Sarah Margon, the Washington Director of The Human Rights Watch, remarked to Buzzfeed News on Tuesday.

Donald Trump’s speech brusquely boiled down inflamed international tensions to a battle between good and evil, a hyperbolic monologue promising of destructive retaliation, which then echoed into the void with little to no policies properly outlined. 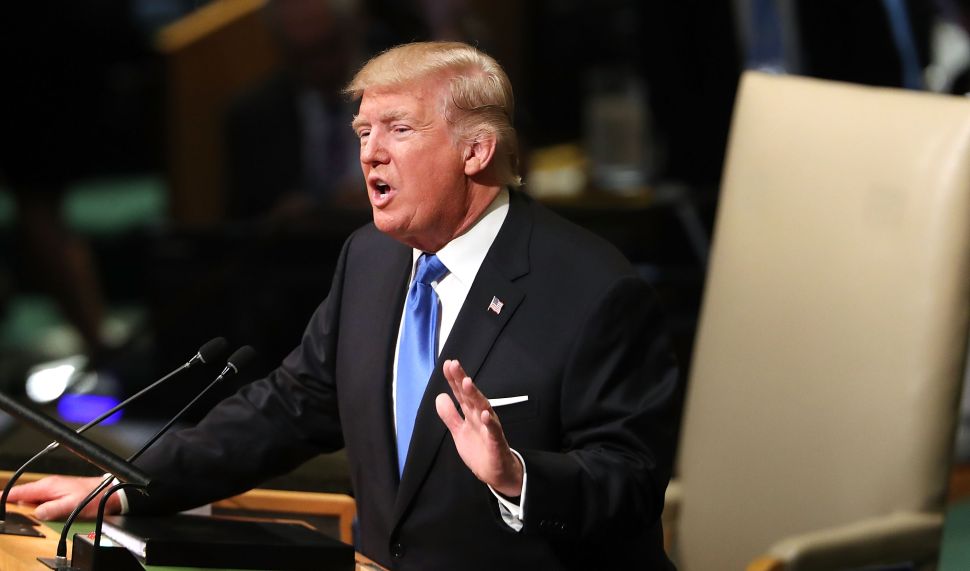