She’s back!—maybe not the pill-propelled Tasmanian devil who thundered through her sprawling homestead, tormenting two generations of Oklahoma off-spring, but a pretty corrosive, self-absorbed lump of mother love all the same.

Deanna Dunagan makes a specialty—and a rather good living—out of such roles.

She’s one of those Tony winners nobody remembers—a Texas-born, Chicago-based, Grade-A actress who almost never works in New York. What is remembered is the emotional rampages she went through to win that award, playing Violet Weston in Tracy Letts’s August: Osage County—a deliciously malicious, democratically abusive matriarch.

In stark contrast to the violently raging Violet is Ida Armstrong, who just arrived at the Peter Jay Sharp Theatre of Playwrights Horizons in the world premiere of Max Posner’s The Treasurer. She allows Dunagan to use the pastel portion of her palate.

Freshly widowed like Violet, Ida is the more civilized, cultivated member of the motherhood—snooty, if you must. She’s interested in continuing her socialite life-style, living in a ritzy retirement home (“I’m a Beaverbrook person! I’ve played tennis there!”), ponying up for the Albany Symphony Orchestra, succumbing to the soft, seductive sells of flattering store clerks. But her mind and money are running out, and that leaves her at the mercy and double-entry bookkeeping of a son in Denver (a.k.a. The Treasurer), one of three sons she left behind to follow her heart into a second marriage. The phone calls back and forth between mother and son are a wail of two cities.

Both (for want of a better word) “heroines” are based on the grandmothers of the playwrights. Letts got a Pulitzer Prize and a Tony out of Violet’s sturm und drang, and Posner saw The Treasurer in his father’s angst over his mother’s finances.

“The play really came from wanting to understand this chasm between her and my father—and feeling like it was kind of undefined and unknowable to me at that time,” Posner told a talkback group recently. “Slowly, I was circling the drain of that.”

Dunagan doesn’t care how many generations are jumped as long as the roles are worth the leap—and, for her, these are. “Max is a brilliant young man,” she insisted. “He’s only 28 years old. When he started this, he was 26. How does he know all this? I think he is extremely talented and going to be an important voice in the theatre.”

His play came to her in an extremely circuitous route via the Sundance Theatre Lab in Morocco, where it ran as a workshop in 2016. It was one of four works presented there by a mixture of Americans and Middle-Easterners. Dunagan said yes with dreams of Marrakech dancing in her head—or, less exotically, “It was a fascinating opportunity to be globally inclusive and communicate with other cultures.”

She figures that director David Cromer is the one who waved her aboard this project. They have known each other for years in Chicago but never worked together before. The time had come. “When we read the script, we knew it would work like gangbusters, and it was the hit of the whole [program].”

Posner and Cromer made points with Dunagan by pitching the whole play on one level of the stage. In August: Osage County, she tore through an expansive Southern manse, up and down Todd Rosenthal’s two-tiered, 21-step staircase. Elaine Stritch’s line about the prostitute somehow comes to mind: “It’s not the work, it’s the stairs.”

She hoped her Tony would get her performances cut back to six a week, but it didn’t, so she took the play to Sydney and to London, where it put her in the running for an Olivier. Before leaving, she got a gander at her Broadway replacement, Estelle Parsons, who is 12 years older. Watching her zip up and down those stairs, almost motorized, Dunagan admitted, “I was so shocked when I saw her. But she’s Swedish and really works out.”

The most exhilarating moment in August’s rough-and-tumble occurred at the end of the second of the play’s three acts when Violet’s first-born (Amy Morton) takes charge of her malevolent mom and shoves her into a sofa. “Even though we worked with a fight person, I was always getting hurt. I just don’t know how to do stage combat, but I had a wonderful acupuncturist here who helped me get through it,” Dunagan said.

Plus, she loved that moment. “When I’m looking upstage at her and she says, ‘I’m running things now,’ the audience exploded. Every night. It was like a hockey game or something. The cast adored it. We joined hands in the dark, and Amy led us off.”

Dunagan still regrets she didn’t give the Tony-acceptance speech she wanted. “The speech was: ‘It wasn’t me. It was the role. Whoever played this role was going to win.’ But I went to this Tony luncheon, and they told me that had been said, so instead: ‘We opened this play in Chicago last summer and thought it would be a six-week run. Then producers brought us in, and New York welcomed us with open arms. I watch the Tonys on TV like everybody else, and I never dreamed of this.’”

As they played her off, she said, “‘All I wanted to do, since I was a little girl, was get everybody together in a room and put on a play. Now, I got to do it on Broadway.’”

Truer words were never spoken. “That’s what I did, from the time I was five years old. I would make up plays and put them on with my cousins. I was born acting. I danced on the altar of the Baptist church in Monahans, TX, when I was two,” she recalled.

She married her high school sweetheart. It didn’t last, but the marriage produced a son, who produced grandchildren, lending a certain credence to the roles above.

At the University of Texas, she had three dates with Charles Whitman. By the time he came for a fourth, she was dating the man she married and said no. Whitman later murdered his wife, mother and 17 other people as the Texas Tower Sniper. “I always thought it was odd that my wedding announcement and his wedding announcement came out in the same copy of The Austin Statesman on the same day,” she said.

She got her master’s degree at Dallas Theatre Center, where she met Lee Theodore (of The American Dance Machine and West Side Story) who brought her to the real West Side in New York. Off-Broadway roles followed. “Then, my bullfighter boyfriend got gored, and I went back to Mexico to be with him in the hospital. He was gored twice while I knew him. That was scary, but I didn’t see it happen.”

Some years later, she came back to New York, and got cast understudying Ann Sachs in a Roundabout Man and Superman with Philip Bosco, George Grizzard, Mark Lamos, Laurie Kennedy and “all sorts of interesting people. I went on for Ann once, too—with 25 minutes notice—and it was one of the best performances I ever gave.”

That got her an agent, but he could only get her cast regionally and on tours. It was a 1981 national tour of Children of a Lesser God that plopped her down in a permanent place. “We’d been in Fort Lauderdale for Thanksgiving, and we thought, ‘Who booked us into Chicago from December 14 to February 14? Who did that?’ But it was a mild winter, a gorgeous city—and I had a crush on a stagehand in the Blackstone Theatre.”

Dunagan has been toddlin’ there ever since, performing in more than 30 theaters in the area and becoming something pretty close to The Geraldine Page of Chicago, garnering three Joseph Jefferson Awards (for James Joyce’s The Dead, I Never Sang for My Father and August: Osage County) and three After Dark Awards (for Desire Under the Elms, The Glamour House and A Delicate Balance) in the past 24 years.

It seems to be her city of contentment. “I have a beautiful condo overlooking the zoo, and I love it there. I have my car. I can drive and do errands and pick up things, put them in my trunk and take them home. In New York, you’re always lugging around things by hand. It’s hard for me in New York. I’m a Texas girl. Chicago’s good for me.”

And when will she be lighting up another New York marquee? “I don’t know if I ever will,” she admits. In point of fact, she almost didn’t make it this time. There was a scheduling problem because Peter Friedman, who plays her son (beautifully), had an HBO series coming up, so Playwrights Horizons proposed switching The Treasurer to its Christmas slot. It eventually proved unnecessary, but, for a while, figuratively and literally, Dunagan developed cold feet. “I could envision myself walking from Times Square to the theatre in the ice and snow and sleet,” she said with a shiver.

“Max called, and I told him there were many, many actresses in New York who could play this part. He said, ‘There aren’t. I don’t feel that way. I know we have to have Peter, but we need you, too.’ So I said, ‘Well, O.K.’—and then Peter’s HBO got shifted.”

She has a good role to snuggle up to this winter in Chicago. “I play Nancy Reagan at the time of the Gorbachev summit in a play Robert Falls will direct at the Goodman in January and February. It’s called Blind Date. The playwright, Rogelio Martinez, has condensed the two summits into one, and it really is a quite wonderful play.”

The storyline being publicized: “Ronald Reagan and Mikhail Gorbachev eschew conventional protocols to discuss pop culture and old movies—while their wives mirror their husbands’ negotiation in a passive-aggressive tango over tea and fashion choices. A compelling, edgy comic journey.” Maybe a journey back to New York City? 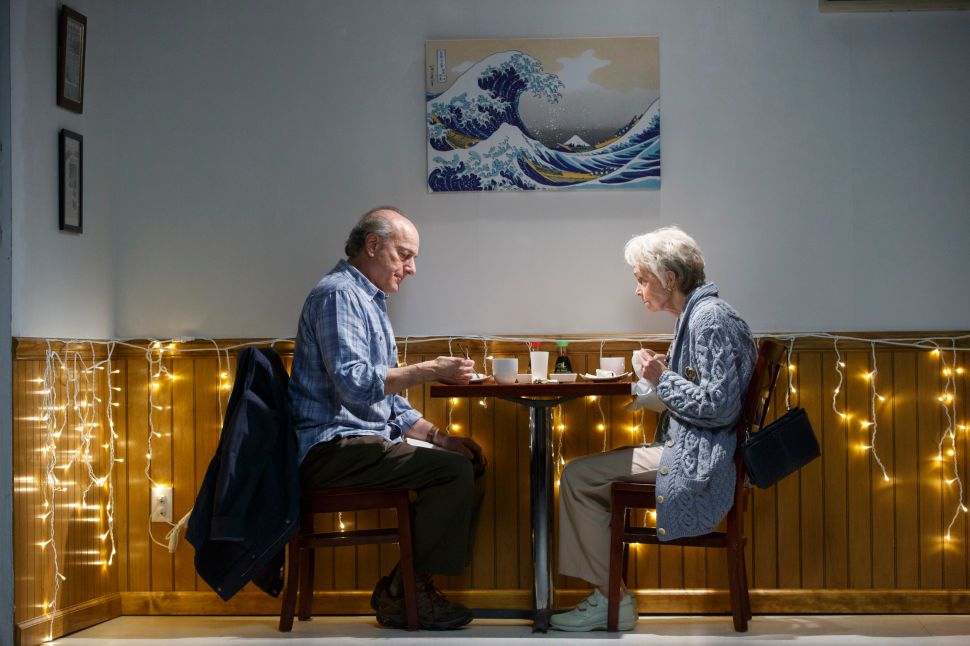