With a second Kingsman movie in theaters and Damon Lindelof adapting a Watchmen pilot at HBO, it’s an indisputable fact that comic artist Dave Gibbons has made an indelible mark on culture. Gibbons is the artist responsible for drawing the original Watchmen and Kingsman comics as well as Dan Dare, arcs of Green Lantern, and scores of other comics over the past 40 years of his career. His new book with writer Tim Pilcher, How Comics Work, is a how-to guide for aspiring pencilers as well as an insight into his working process.

What made you want to do a how-to book for comics?

Well, I never had any formal art education. Everything I know I learned on the job or from books. I’ve got a huge library of books on how to draw, how to paint, anatomy, perspective, inking and penciling. I always find there’s something new in virtually every book I buy. Some aspect of doing something that I haven’t seen before. I always suspect there’s one really important secret that everyone knows but me. Tim Pilcher suggested a how-to book for comics. The fact that I could collaborate with Tim, who I’ve known for awhile and is a really good editor and writer, suggested it could be less of a solitary endeavor and much more fun.

Outside of your book, are there any academic programs for comics that you think do a solid job teaching—is a degree even necessary to get work in comics?

I don’t know that a degree is necessary to get work in comics. What you learn might make it easier to get work in comics. Certainly in drawing for comics, the most important thing is what your portfolio looks like. In Scotland there’s a wonderful course at the University of Dundee where you can get a master’s in comic art and I’ve helped teach that course. In the states there are things like the Joe Kubert school, which many people have used as a prelude to working on comics and SCAD teaches a lot of the necessary skills for drawing comics. It’s great to see that comics are taught at that kind of level.

You reference your comic Give Me Liberty several times throughout the book. Series protagonist Martha Washington has been lauded as a relatable black female character, especially when compared to the X-Man Storm. Homeless shelters have even used Give Me Liberty as an organizing tool. How did that book come about and why do you think it’s often left out of history?

Dark Horse published a new edition earlier this year; it’s got a rather nice dark grey cover and a new painting of Martha Washington. I think Frank (Miller) and I made a conscious decision… After Watchmen and Dark Knight we didn’t want to do another superhero comic, and so it doesn’t fit comfortably into that genre. Indeed, it doesn’t fit comfortably into any genre because it’s science fiction, it’s romance, it’s satire, and it’s a bit of a western, and a space adventure. I think maybe it’s one of those things that’s hard to categorize. As far as the character of Martha is concerned, I know that I speak for Frank as well when I say she’s one of my very favorite characters that I’ve ever worked on. She’s such a decent person and a very low-key center, around which all the madness rotates. We do have some interest from films and TV for Martha at the moment. I think Martha would make a wonderful property to develop these days given what’s happening politically in the U.S. Hopefully, you haven’t seen the last of Martha. You’ll be seeing more of her quite soon.

You talk a lot about paneling and plotting in the book. In Watchmen, many of the pages have exactly nine rectangular panels each. Why did you choose to go in that more rigid direction for that series?

I suggested the nine-panel grid to Alan (Moore) because I knew it was going to be a very complex story and I knew we wanted to tell it in a  straightforward way otherwise it would be too baffling. At the time we did Watchmen the fad of the day (in comics) was to have very splashy poster layouts where the storytelling was secondary. There’d be one big key image and then a lot of smaller images around it. I wanted to make sure Watchmen looked unmistakably from Watchmen. I figured if we did it on this very formal grid it would stand out from the comics around it. It also gave Alan a lot of control. He would know exactly where everything was going to be on the pages, the size of the panel, and what was available. I think it was one of the key elements in the success of the book.

What’s a trend you see in comics art today that get’s on your nerves?

I don’t know that there’s anything that get’s on my nerves. I only tend to bother with the things that I like. In the days when Image Comics first started (in 1992), there were a lot of young draftsmen who maybe didn’t draw particularly well but could certainly add a lot of detail, and I used to find that was a bit bogus. Also the kind of artwork that was rescued by computer coloring. I think at the beginning of computer coloring (in the late 1980s and early ’90s) everybody went overboard with what was possible. Everything has settled down, and it’s now much more what you need to show rather than what you can show, if that makes any sense.

From Moebius to Wally Wood, you spend a lot of time in the book talking about comics draftspeople that influenced you. Who are some newer artists working today whose work you admire?

I knew you were gonna ask me that. I do love people like Mitch Gerads who’s doing a wonderful Miracle Man run, and Chris Samnee who’s done some wonderful work for Marvel on Daredevil. I still love artists like Frank Miller, Mike Mignola, Sean Phillips, Duncan Fegredo, Chris Weston. I’m sure I’ll leave someone out if I try to create a list at any great length. I think the standard of comics today is as high as it’s ever been if not at it’s highest. 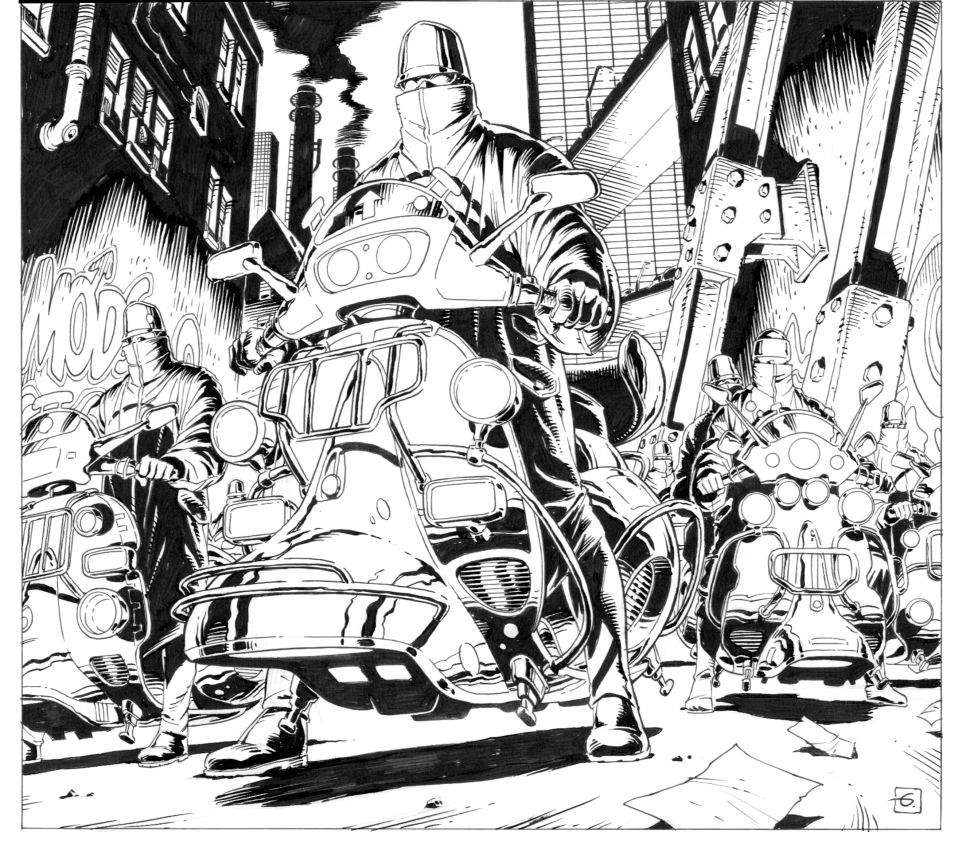