From rage to rapture, Melissa Leo runs the gamut in another Awards Season contender, lifting up Maggie Betts’ Novitiate for a major hallelujah. The 1960s-set drama about faith, change and the Catholic Church played last week at the Toronto International Film Festival. Starring opposite Margaret Qualley (TV’s The Leftovers) who plays a young novice, Leo dons the robes and wimple for a portrait of a complicated Reverend Mother confronting the erosion of a lifetime of faith and power with the arrival of Vatican II. That edict, sent down from her male superiors, calls for the dissolution of the convent where she has lived for four decades and, by extension, her way of life. Leo sat down with Observer at the Intercontinental Hotel to discuss life, faith and her latest film.

Where did you dig the Reverend Mother from? How did you achieve her many, many colors?

There are about a hundred ways to answer that question. And the first thing that comes to mind is going to a Montessori School in New York City. It was a housed in a Catholic school. So we had habited nuns in the hallways. Not all of them, because by the time I was in kindergarten it was ’65, but it was just so mysterious. They had a costume on, for one thing. And I love a costume. It was silent, walking through the halls. And one of them you called “Mother.”  And the rest of them you called “Sister.”  And I didn’t have a sister. Anyway it’s just a little child’s vague memory, right?

What drew you to the part?

It’s mysterious to me. I said oh, Reverend Mother? When? Oh, next week? Sure. Yeah, I’ll be there. That’s exactly how I make my most of my really important decisions.

Did you and Director Maggie Betts have a shared vision for the role?

I couldn’t really extrapolate my character from the page. I spent 17 hours alone in a room with Maggie trying to understand what it was she wanted me to do for her. And I think that that complication is a fascinating reality in filmmaking. In some ways, it’s much more fascinating than when the part is so clear on the page. It’s like with Frozen River, I didn’t have a lot of questions about [my character] Ray Eddy. It was there. In this script, the Reverend Mother seemed to be this—and she seemed to be that. And how do you get Reverend Mother from here to there?

Did you meet in the middle?

The more we talked about it the more invested I became. I had in my mind this idea from the very beginning of the film. One of the very first things we shot, this woman tells these girls—and it’s the truth—she has not left the convent grounds for 40 years. Now, I’ve done a little bit of meditation, which requires silence. I was in an elevator this morning in the hotel coming down to see you, where every single one of the seven people in the elevator was on a gadget doing something. And I stood. In the Reverend Mother, I saw a woman who was gentled by her years in the convent. And that was what was so upsetting because the life she had led had worked [for], now is threatened. There is a rage in her in the final product.

It’s also a situation with parallels outside of the religious context. This is a woman who decided her own fate. You don’t see why she decided to become a nun, but you do see the many ways she’s absolutely in charge within the convent’s female community.

My Reverend Mother was comfortable with her life and something was invading and changing it. After 40 years, housed only with women, it’s her life. It’s not a women-versus-men or us-versus-them. And that’s the affront of Archbishop McCarthy (Denis O’Hare) coming in. She realizes “Oh my God, it is us and them!”  We thought we were even better than them. We were married to Him!

It’s a really rough divorce—and that same conflict in divorce that happens where you ain’t getting a thing: Not custody. Not money. Not the house.

If forced to slot the drama into a genre, it’s like a boot camp movie, but set in a convent with young women instead of green young soldiers. And you’re like the sergeant.

Oh yeah, definitely. I see it immediately as you say it. I’m Lou Gossett.

It seems that contemporary viewers can be uncomfortable discussing faith and religion. It’s interesting to see the sisters’ struggle with faith, the idea that having a life of faith and spiritual fulfillment is not easy. Some people are of the opinion that it’s easy once you decide that you have faith.

Then everything’s all right. Now you’re on a comfortable cloud and everything will be just fine. No, it is a commitment. She says that to the girls. This is about work, hard work. That’s what love is about. It’s what love on the planet is about. It’s not that it’s easy and you fall in love and you lust after this person but you find a way with love to [navigate life]. And that is what the teaching is. And that is what intrigued me about it. The nuns that I grew up around in New York City, they were those activist nuns. They were the nuns who were shot in El Salvador, you know? They were the women who had chosen their own path and put their lives on the line in the only way they were allowed.

In the film, that love comes through in your connection with the other actresses.

It’s the best part of acting when you have people who will really meet you on the playing field. And every one of them is a different kind of an actor. Even the young extras from Nashville, who knelt on that stone floor hour after hour, fed my performance so much. That’s what acting is. You’re not alone. It’s reacting. That’s what we do. You ask me a question. I have a blank mind. You ask me a question and the question is informed and you’re interested. And now my mind starts popping. That’s what conversation is. That’s what communicating is. And it’s not everyone you work with who is generous and present and there. The commitment of the actresses, from the extras right on through to the older actresses who joined us in that chapel to fill it up in all their habits, was remarkable. A remarkable, amazing bunch of women joined us in Nashville.

One thing I noticed in playing a nun in traditional habit is that there’s no place to hide. Even though the whole body is covered, the face is completely exposed.

And in the end that might be the thing that interests me the most about playing the Reverend Mother because it’s the opposite of masking, which is a form of theater I have a great deal of respect for. It’s actually where I began as a small child with Peter Schumann [of the Bread and Puppet Theater]. But this is exactly the polar opposite of masking because it is only your little shiny punim that’s showing.

So next chapter, what do you think?

This is a big next chapter time. Next week I turn 57, which is almost 60 to me. So, in my mind I sort of see myself as 60 now. And the years…what does it matter? It’s a reality. I think what I’ve learned as an almost-60-year-old woman is that we have three phases in life. We have a youth, which lasts till we are 30, the age my son just turned. I see him now no longer a youth. He’s a man in his life. And then there’s 60. And by then you have hopefully lived your life. I am that lucky woman who has been living my life all my life. Anything can happen now. Anything. And it will be only whip cream and delightful things. Even in the conflict and the hardship. My mother passed recently. My father is in good health, but older now, and it’s a changing time. And with my son’s dad [actor John Heard] passing, it’s a huge marker in my life. Huge.

I know we are.

Author of  the novel The Last Woman Standing: A Novel of Mrs. Wyatt Earp, Thelma Adams is a leading New York based film critic who has twice chaired the New York Film Critics Circle. 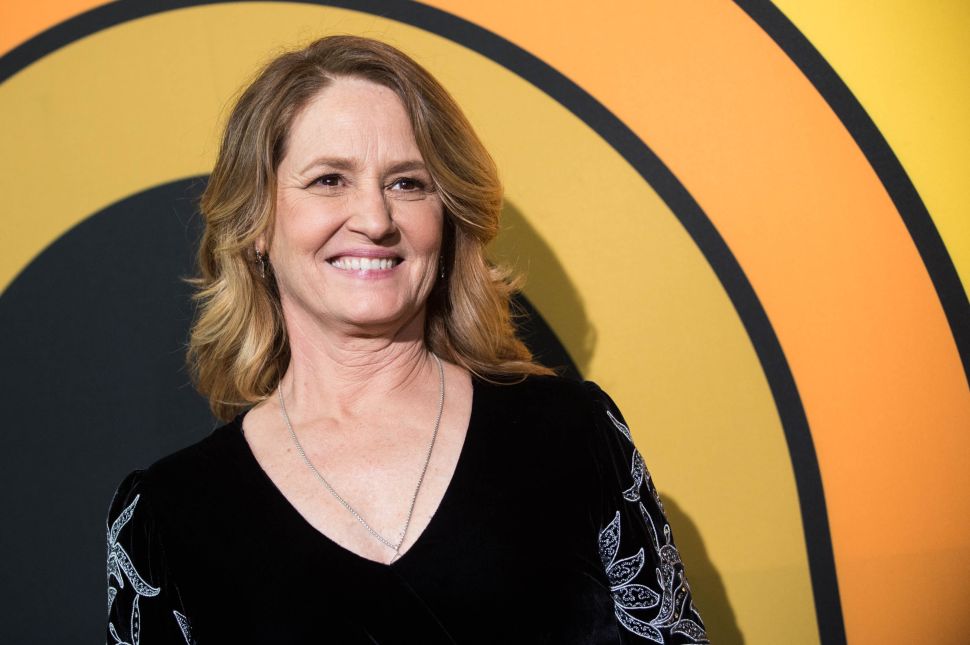