Finding Neverland is no easy enterprise in Sarah Ruhl’s For Peter Pan on her 70th birthday. It begins in a kind of ground-bound reality—in a hospital room in Davenport, Iowa—where five quibbling siblings are doing a deathbed vigil for their dad.

Once the patriarch passes, all retreat to the family kitchen to drown their sorrows in shots of Jameson (as befits any self-respecting Irish Catholic wake), while the newly minted ghost roams his old homestead, reading the paper, feeding the dog, lazing about the house and, generally, making himself felt among his immediate survivors.

The first two-thirds of this 90-minute family drama, opening September 13 at Playwrights Horizons, is the children’s hour. This is when the assembled mourners come to grips (tardily) with the reality that they are now officially orphans and will be the next wave of lemmings to roll off the cliff. Losing your parents, one of these off-springs wistfully observes, means “There’s no one standing sentry between us and death.”

With this event, all five finally reach adulthood, whether they like it or not. Along the way, they have taken baby steps in that direction. For one, growing up was getting to eat at the grown-ups’ table at holiday gatherings, not at the children’s card-table. For another (the medic among them), it was running to an emergency, not from it.

But one character, the sibling inspired by Ruhl’s mom, Kathleen Kehoe Ruhl, was spared that little speed-bump to maturity, having played Peter Pan at the formative age of 15 in a Davenport Children’s Theater production in 1955, so she never really grew up.

Ruhl’s mother did go on to earn a Ph.D. in Language, Literacy and Rhetoric, but that first brush with theater opened a door to the stage that never closed for her—or her daughter.

“My mother,” Ruhl confesses in her program notes, “was always someone who had an ambivalent relationship with the word ‘grown-up,’ and she’s always stayed young, in the sense of being devoted, playful, and very much alive, in the theater.”

Just as J. M. Barrie based his characters on the real-life family of British barrister Arthur Llewelyn Davies, Ruhl decided to draft the Kehoes into the play, interviewing her mother, her aunt and her three uncles for the project. “This was a very unusual process for me,” she admits. “I wouldn’t say the characters in the play are direct representations of anyone in my family. It was more of an attempt for me to catch the kind of symphony of a family talking, everyone at once. While there might be characteristics some share, they’re not exact one-to-one avatars of my own family.”

Her oldest and crankiest uncle turned into Captain Hook; the other two became the Darling boys, Michael and John; her aunt was the nest-making Wendy, and her mom gave in again to the wearing of the green. When her Peter Pan outfit is dragged out of an old trunk, the play shuffles off this mortal coil and heads straight for Neverland, where they all play-act Peter Pan to keep their grieving at a distance.

“The characters are still in the text labeled one through five. I think that was partly because birth order seemed important in this play. I wanted it to be about the whole family and how they spoke as individual characters. Once I tried to change the text back to their real names, but it didn’t sit well with me so I went back to numbers.”

As gifts go, this is one that keeps on giving. “I gave the play to my mother just as a present of having written this world for her. I had no idea if she’d ever want to play it. Of course, she did.” Kathleen Ruhl starred in the second of the play’s four incarnations in Chicago, where she is still active in theater and where the playwright grew up.

“That was such a wonderful experience for me, seeing her play herself. In a funny way, I feel I couldn’t have finished the play until it was given birth to in that way.

After Chicago, this role of Ann—the once and future Peter Pan—went to a different Kathleen—Kathleen Chalfant, who worked in Ruhl’s Dead Man’s Cellphone, Passion Play and Dear Elizabeth. “I consider her something of a muse for me,” Ruhl admits.

The herculean job of finding a Captain Hook to do proper battle with Peter Pan was resolved when her longtime collaborator, director Les Waters, signed up to bring the play in. “The minute I told him I was writing a play about Peter Pan, he said, ‘Well, I know who’ll be Hook: David Chandler. He’s always wanted to play that role.’”

Rounding out this Grade-A cast are Lisa Emery, Keith Reddin and Daniel Jenkins.

It wasn’t difficult for Ruhl to find the right setting for her play. “I was at my grandfather’s death vigil so I didn’t have to think that much,” she says. “At the time, I was a very young writer so I wouldn’t have made a play out of that. It was only later when I was thinking I really wanted to write a play for my mother for her 70th birthday as a gift that I started thinking about family and what it meant to be a grown-up. A huge turning point for my mother in growing up was in losing both her parents. I suppose it’s unusual in this day and age to be present at the death of a family member, but it was a formative event for me and probably my mother, too.”

When you think of Peter Pan, your first thoughts are usually of flying and crowing and dueling with dastardly villains, but it does have a melancholy undercurrent that worked for Ruhl’s play. The boy who won’t grow up is based on a boy who didn’t grow up: Barrie’s older brother, who slipped through the ice while skating and died.

For her purposes, Ruhl rephrased her situation in the form of a Japanese Noh drama. (She calls it “a contemporary Midwestern Noh drama.”) “As I understand it, it comes in three parts: a traveler meets a ghost, does not recognize the ghost, then recognizes the ghost and either dances with the ghost or embraces the ghost.”

There are a variety of ways you can take For Peter Pan on her 70th birthday, she believes. “I think of it as a love letter to the theater about the fantasy that the theater affords us, how we can play with each other in a different way inside the theater than we can around a dining room table, but it is also about the deep bonds of family and about growing up. This is a depiction of a family that’s not entirely pathologized. It’s a family who can fight about politics and still love each other. It’s rare for that kind of story to make it on the stage because we always have this idea that drama has to be about secrets and conflict. This is about the moment-to-moment experience of being with family and of letting a family member pass. When I watch this fine, fine group of actors be in the moment with that, it’s very moving for me.” 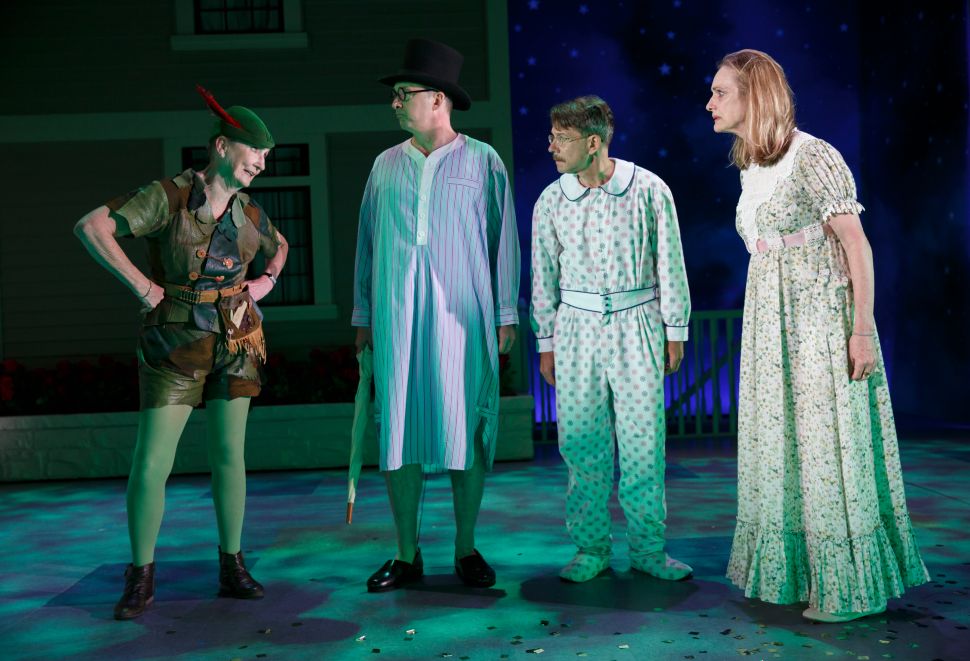