Every year from September 1 to March 1 the government of Japan permits dolphins to be legally hunted. During this season dolphin hunters spend hours herding pods of dolphins into a cove on the shores of Taiji, Japan to kill or capture them en masse. The quota this year, set by the the Taiji Fishermen’s Union, is 1,940 animals. That includes nine different species of dolphins and whales. This year’s tally is an increase from last year, which was set at at 1,840 animals—though even with this limit it’s thought that many more are likely killed and not reported to authorities.

On September 3, the Dolphin Project (a non-profit dedicated to protecting the aquatic mammals) reported on a gruesome scene from Taiji. Over the span of seven hours a pod of pilot whales were harassed by hunters who roared their engines and banged metal poles against their boats to disrupt the sensitive SONAR navigation the animals use to travel through the . The whales swarmed together, disoriented, as they were slowly herded into a cove where the hunters cast their nets to seal their fate. The animals are often brutally stabbed, beaten and left to die slow, painful deaths before their meat is butchered and distributed to the market.

“Once again, we are in the horrible position of seeing dolphins and small whales slaughtered for meat—meat that is contaminated with mercury and should not be eaten by anyone,” said Mark J. Palmer, the associate director of the International Marine Mammal Project at the Earth Island Institute, in an interview with the Observer. “[The hunts] are heavily subsidized by the captivity and aquarium industry that buy live dolphins and whales for thousands of yen each, leaving the rest to die,” he added. Palmer’s initiative, along with 22 partner organizations from around the world, have implored Prime Minister Shinzo Abe to end the practice of dolphin hunting, as well as whaling, which is carried out under scientific pretenses.

Cetaceans (dolphins, whales, and porpoises) are highly intelligent animals. A 2000 study found that dolphins, like humans and great apes, were capable of self-recognition in mirrors. Each individual dolphin has a unique whistle to differentiate themselves, and researchers have proven that dolphins retain the memory of the whistles used by all the dolphins they’ve previously known. One female dolphin, Bailey, was shown to recognize the whistle of a fellow dolphin she shared a tank with twenty years before. In South America, a well known cooperation exists between fishermen and dolphins who work together to catch fish. The dolphins signal to the fishermen when to cast their nets, and the fishermen have developed personal relationships with the dolphins, knowing each one by name.

The 2009 documentary, The Cove, which reported on the dolphin hunts in Taiji, is largely to thank for a growing momentum in the movement to cease this inhumane practice. But the Japanese government still condones these killings, and despite global protestation, the industry is thriving. 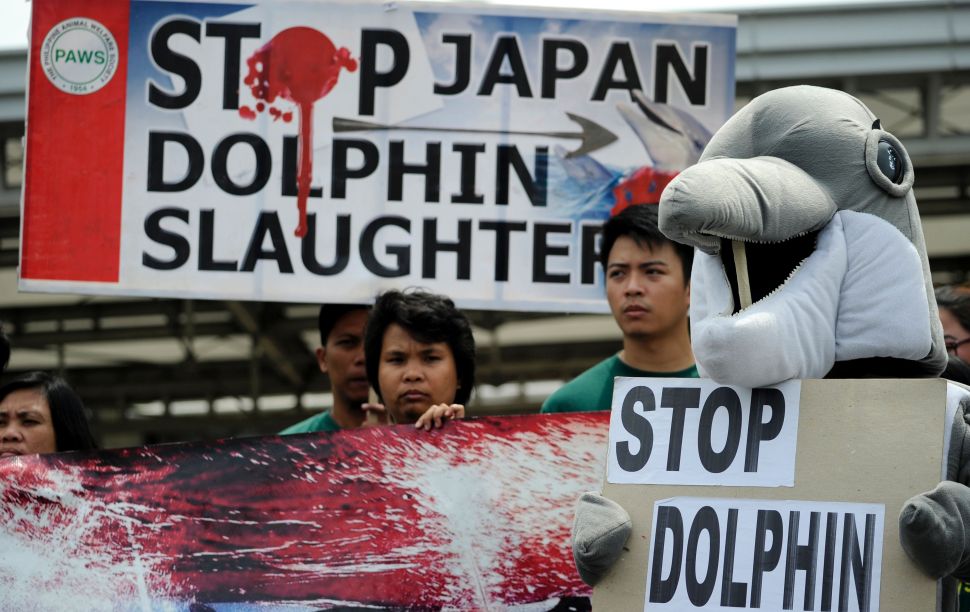