On Monday, even before the ballots were tallied, millions of Iraqi Kurds were already celebrating the newest, boldest step in their generations-long path toward national independence. Drivers blasted their horns in the streets while youthful masses waving national flags paraded along the thoroughfares of Irbil, the capital of the semi-autonomous Kurdish Regional Government of Iraq. As if to signal the eruption of Kurdish nationalist dreams, fireworks streamed throughout the skies.

Earlier in the day, the Kurds voted for their independence in a regional referendum. With over 70 percent of the 3.9 million registered voters turning out, all those casting predictions foresaw the same thing: an overwhelming national “yes” for an independent Kurdistan.

The Kurds had every reason to celebrate.

Beyond the boarders of KRG, however, political actors were less cheerful. The government of Iraq offers no option for secession in its newly drafted constitution, and its supreme court put a hold on the plebiscite—an order that was roundly ignored.

Beyond the deserts of Iraq, Iran and Turkey conducted military drills along their Kurdish borders, apparently preparing for a possible conflict. Both countries have large Kurdish populations, which they fear might be excited into uprising by the emergence of a new and independent Kurdish state.

Even the United States opposed the move. Speaking for the Trump administration, Press Secretary Sarah Huckabee-Sanders said the U.S. preferred “a unified Iraq” to help ward off ISIS and Iran. However, thus far, a unified Iraq seems to be overwhelmingly dominated by Iran.

Surprisingly, much of the American media seemed to oppose the vote as well. The editorial boards of both the left-leaning New York Times and right-leaning Wall Street Journal published reviews instructing the Kurds to wait for a better time. Their main arguments were roughly the same: An independent Kurdistan will only throw a proverbial wrench into the already sputtering—if not flaming—political machinery of the Middle East.

These arguments have their merits. The Middle East is especially chaotic at the moment, and maybe now is not the time to strike another match.

However, these points are drawn from a common worldview, one that runs on the traditional gears of political thinking. According to this mindset, forces are at odds with one another in the Middle East and the key is to ensure as much balance as possible.

We must fundamentally disagree with this mode of thinking. The underlying ailment of the Middle East is less an absence of balance than a lack of aspirations.

What the Middle East needs most is democracy, and it’s about time Muslims across the Middle East see that it can work for them as well as it worked for the State of Israel. Freedom and democracy have historically proven themselves to be the most effective force of pacification. After all, the last time two democracies fought a conventional one-on-one conflict was during the Peloponnesian War, which took place over 2,400 years ago.

There’s little doubt that the development of democracies could heal the Middle East. As for those who believe democracy won’t work in the region, they need look no further than the Jewish State. Israel, after all, lies at the very heart of the Middle East and has faced existential threats and crises more severe than almost any other state in the region. Even so, they’ve always maintained regular democratic elections, governmental transparency, and a free, unrestrained press.

Seen from that perspective, an independent Kurdistan, born of a democratic plebescite and dedicated to democracy, is what the Middle East needs.

As explained in Bernard Henri Levy’s brilliant op-ed supporting immediate Kurdish independence, the Kurds have run their semi-autonomous territory along the fundamental tenets of democracy, with a fair electoral process, religious liberality, and freedom of the press. Kurdish President Masoud Barzani announced last year that he would not seek another term as president, proving the general Kurdish commitment to maintaining the integrity of their democratic system. Throughout the decade-long Iraq War, the Kurdish region of Iraq was the only sector of the country kept completely terror-free. And that’s not because they don’t have formidable military capability. When ISIS invaded Iraq in the summer of 2014, sending the American-funded Iraqi army into frantic retreat, the Kurdish Peshmerga forces repelled the Islamist attackers and then held the line—some 600 miles long—for nearly three years, saving the ailing state of Iraq and paving the way for the nearing defeat of the Islamic State.

The Kurds have proven themselves worthy allies to the United States, committed both to our democratic principles and our shared security interests.

Most importantly, however, after decades of failed democratic attempts in the Middle East and an Arab spring gone wrong, an independent and democratic Kurdistan will prove finally that freedom is a gift that all of humanity not only deserves, but can actually obtain.

Rabbi Shmuley Boteach whom The Washington Post calls “the most famous rabbi in America” is the founder of The World Values Network and is the international best-selling author of 31 books, including, “The Israel Warrior.” Follow him on Twitter @RabbiShmuley. 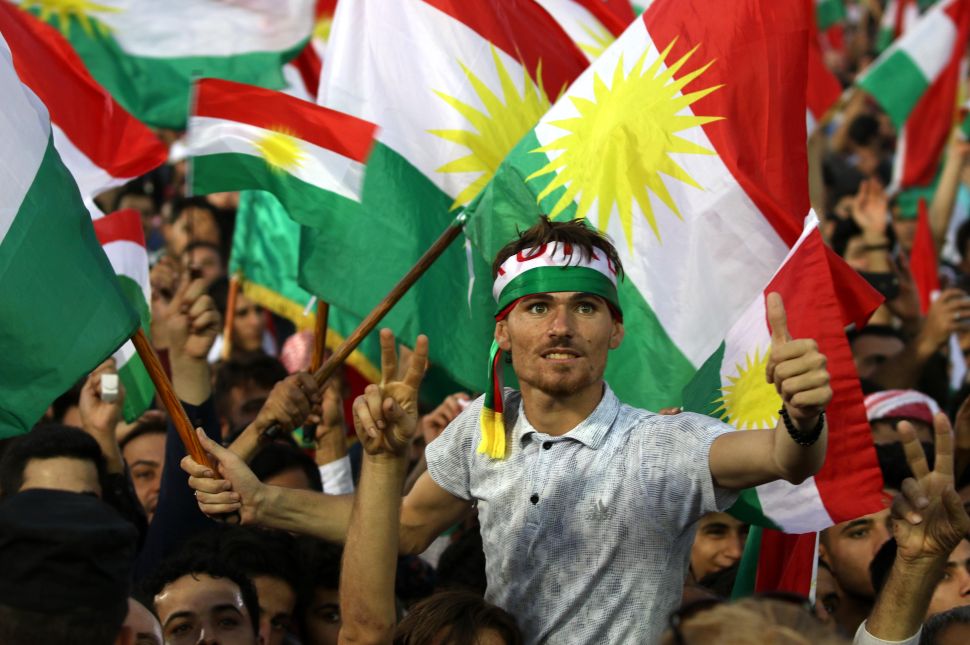