In April 2016, when MoMA announced that it would have, for the first time in seven decades, an exhibition on fashion, curator Paola Antonelli wrote on the the museum’s website, “To say that MoMA has an idiosyncratic history of collecting and exhibiting fashion is a polite exaggeration. Historically, the Museum has deliberately chosen not to engage with fashion in its galleries or its repositories, wary of those most anti-modern terms with which it is often derided: ephemeral, seasonal, faddish.”

In a subsequent interview, Antonelli explained that twenty years ago, when she first interviewed for her current position, she asked why MoMA didn’t collect fashion. The response was in line with the typical attitude of the male-dominated art world: “Fashion is so ephemeral, it’s so dictated by seasons, it really goes against the idea of timelessness that is at the core of the idea of Modern.”

That’s why MoMA’s newest opening, “Items: Is Fashion Modern?” is such a breath of fresh air. Curated by Antonelli and open to the public this Sunday, the exhibition contains 111 items of clothing and accessories that have had an impact on the world in the 20th and 21st centuries. The curatorial team—which, no surprise, is made up of primarily women—looked beyond fashion’s tendency to be cyclical and identified items within that have become so influential, they have remained permanently within our modern psyche.

Although the exhibition is limited to 111 pieces, it’s still a lot of stuff. It felt as if Antonelli was compelled to throw together as many pieces as she possibly could, after being held back from showcasing an important part of the design industry for so long. It’s also why the scope is so large and so ambitious: in determining what the most important pieces of clothing and accessories are, it’s only natural that the amount of information crammed in would be staggering.

Despite that, each piece is displayed proudly and confidently; given the attention it deserves, with simple basics like the t-shirt and the turtleneck treated with the same deference as more dramatic pieces, such as the red Issey Miyake hooded gown made of a single swath of cloth that unfurls in sinuous shapes and drapes across the wall like a window valance. Each piece stands at attention, demanding that you to notice it, then allowing you to step forward to examine and analyze it, getting as close as museum security will allow.

As appropriate for a Modern Art institution, this exhibition uses history as a springboard for fashion theory, exploring ideas of cultural appropriation, power, status, rebellion, emancipation, body modification and the displacement of non-conforming bodies. But, because the exhibition is rooted in historicity, it allows for these ideas to be fully fleshed out. It’s why the the seemingly quiet grandeur of a simple red Champion hoodie that hangs ghostlike and alone, against a black wall, is so much more than what it seems.

It’s those moments where the exhibition really shines, cutting to the core of why this topic is so important.

That particular hoodie was vital to the curator’s overall theme. In a talk that was broadcast yesterday, Antonelli said that the sweatshirt, because of its dual function as both threatening (à la Trayvon Martin) and an object to make oneself invisible, is representative of “these absolutely functional garments that, because of history, become invested with so much power is a marvel. And we want people to come into the exhibition recognizing that anything that they wear at any time can be a symbol, and a symbol that is world-changing.” As such, the show also includes other pieces that have helped paint the cultural vernacular of today, including a burkini and Colin Kaepernick‘s ruby red San Francisco 49ers jersey.

The curation includes some inexplicable, if humorous juxtapositions: a Chanel No. 5 perfume displayed alongside a row of men’s neckties; a Dashiki—the brightly colored African tunic—next to two rows of yarmulkes; a trio of keffiyehs above a pair of black Doc Marten’s. But despite the fact that many pieces are separated from the viewer with large glass encasements (for what I would assume are for conservation reasons), there are some delightful moments of interactivity: a screen enables you to manipulate the stripes of a Breton shirt just by touching it. Across from that display is an ever-changing projection of tattoo styles, onto both male and female mannequins.

And although the exhibition begins with highly structured, well-formatted themes—including underwear, the modernization of maternity gear, unisex clothing and two rows of LBDs separated by a semi-sheer curtain, it soon devolves. The categories become less defined and more crowded. Within this chaotic cacophony, and the sheer number of objects on display, the message gets muddled, if not hidden altogether.

But the glimmers of greatness scattered throughout the show are compelling enough to mute these drawbacks. Because when a simple t-shirt makes you stand in place, thinking deeply about its significance, it proves that fashion is key to understanding modern design. That’s something women understand instinctively, throughout the development of fashion over the centuries. Even if this show doesn’t say anything new, maybe it doesn’t need to; it just has to exist. And even though the art institution is very late to the game, it’s never too late for some well-deserved recognition for fashion’s importance to the fields of art and design. 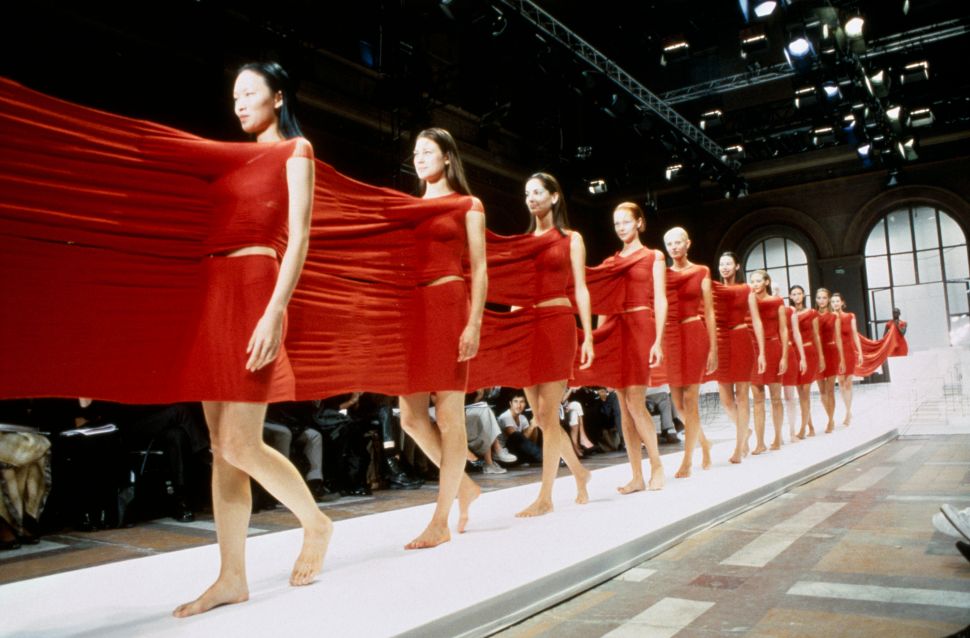