Monaco may be one of the smallest countries in the world, but the tiny principality in the south of France is synonymous with glamour. The most popular time to visit is long after the whirlwind of the Cannes Film Festival, when stars flock to the spot in the French Riviera for a bit of relaxation time—it also happens to coincide with the Grand Prix.

Aside from luxurious automobiles, Monaco is known for gambling and casinos, of course, but also for the International Monaco Yacht Show—it’s a four-day event where yachting enthusiasts flock to the glitzy locale, checking out the newest superyacht launches and the most magnificent yachts for sale.

This year, it will take place from September 27 to September 30. Don’t worry if you haven’t been able to nab a spot on a James Bond-esque superyacht—even though Monaco isn’t the largest scene in the south of France, it has a plethora of lavish, opulent hotels. Below, see our top picks for where to stay during the upcoming yacht show in Monaco.

The Hôtel Hermitage Monte-Carlo was built at the beginning of the 20th century, and overlooks the Monte Carlo harbor and the Mediterranean. Among the many attributes of the Belle Époque-style hotel is the dome in the hotel’s Winter Garden, which was designed by Gustave Eiffel. The Hermitage is comprised of 278 rooms, designed by Pierre Yves Rochon, including 20 suites, 54 junior suites and 14 Diamond suites.

The most lavish of all the über luxurious Diamond suites is the aptly named “Princely Diamond Suite,” which has three bedrooms, a living room, three loggias and three dressing rooms, as well as three private terraces and a picturesque view of the sea—it starts at 29,500 euros a night. The Hermitage is home to a Michelin star restaurant, Le Vistamar, as well as Le Limun Bar and Crystal Bar. The hotel also offers direct, underground access to the Thermes Marins Monte-Carlo spa, which has men’s and women’s hammams and sentoriums, all situated around a pool decorated with a seashell ceiling.

The Hotel Metropole is also in the Belle Époque style, and was originally built in 1886. Its most recent restoration was in fall 2003, and it reopened in the summer 2004. There are 126 rooms, including 64 suites suites, all designed by Jacques Garcia and done in a Mediterranean aesthetic. The most lavish is the penthouse, the 2,500-square-foot Suite Carré d’Or, which is decorated with Louis XVI furniture and artwork, and has a private terrace offering guests 180-degree views of Monte Carlo and the Mediterranean.

The hotel has serious fashion clout, too—Karl Lagerfeld designed the pool area in 2012, which is now known as Odyssey. It has a fresco-style glass installation around a saltwater pool, along with gardens, private cabanas and a pool house with a restaurant. Odyssey is covered during the winter, but al fresco the rest of the year—it’s available exclusively to hotel guests and members of the hotel’s Spa Metropole by Givenchy. In fact, the marble bedecked spa recently reopened after a long renovation, designed by Didier Gomez.

The Monte-Carlo Bay Hotel & Resort is one of the newer hotels in Monaco; it opened in 2006. It’s in the Larvotto area, and is a bit more casual than many of the other Monaco lodgings. But the less formal atmosphere doesn’t interfere with the glamour of the hotel, which has 334 rooms, of which 22 are suites. The swimming pool “lagoon” has a solarium, gardens and jacuzzi, and there’s also an indoor swimming pool.

The hotel has multiple restaurants, including the Michelin star Blue Bay, which has a bar on the terrace with views of the Mediterranean. It even has its own in-house casino, the Monte-Carlo Bay Casino. Plus, it’s just a few steps away from the Monaco Yacht Show.

The Hôtel de Paris might be the most famous of all the resorts in Monaco, but it’s currently undergoing major renovations, as it has been since 2014. It’s expected to completely reopen in 2019, but if you’re totally set on staying in the luxe spot, don’t fret—a small number of the rooms are being kept open, until the hotel shuts down entirely for two months this October.

The hotel originally opened in 1863, and is also known for its incredible wine cellar, which includes nearly 600,000 expensive bottles. The hotel is also very close to the legendary Casino de Monte-Carlo. James Bond fans might be particularly fond of this hotel, considering it has made appearances in both Never Say Never Again and Goldeneye.

The Fairmont is one of the largest hotels in Monaco, with a total of 602 rooms. It was entirely redone in 2009, and it’s a bit sleeker, more modern and less traditional than many of the other lodgings. There are three restaurants (including a Nobu) as well as a bar in the hotel, plus the Fairmont Spa, complete with a fitness center and rooftop pool, and an in-house casino.

The Fairmont resort is also where you’ll find Nikki Beach Monte Carlo—it’s located on the rooftop, where you can soak in the views of Monaco and the Mediterranean Sea, all while lounging with a glass of champagne and dozing off underneath the sun.

Check out our guide to all the art museums and exhibits to see in Monaco during the Yacht Show. 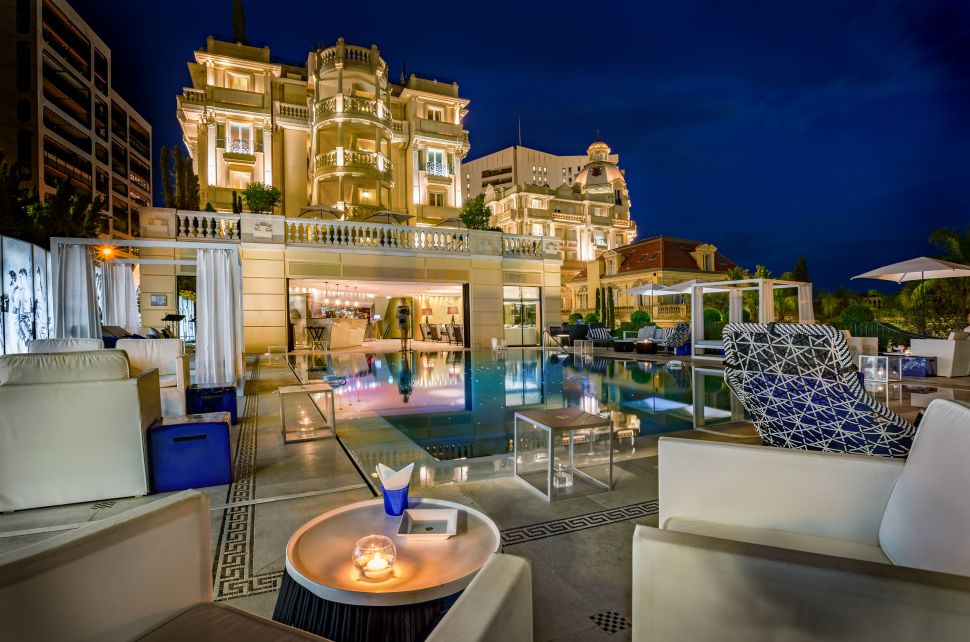