A Jennifer Lawrence movie is always going to be something of a big deal. But a Jennifer Lawrence prestige picture from an A-list director is something cinephiles salivate over. That’s why her work with Oscar-nominated filmmaker Darren Aronofsky has people so excited.

For Lawrence, the upcoming mother! is an opportunity to get back in the win column as none of her films since 2014’s X-Men: Days of Future Past have quite connected. The fall release date also puts her squarely in the Oscars race and keeps her performance fresh in the minds of voters. For Aronofsky, mother! is an opportunity to explore an entirely new genre and remind people he’s still got it after three years away from the big screen. It’s an exciting endeavor on all fronts, but it’s also a risk.

Will audiences turn out for more horror just one week after It drops? Will Aronofsky’s dense material be accessible enough for casual moviegoers? Is the bold and ambitious undertaking even good? Here’s what the critics are saying.

“To be sure, readings of the film will vary; some critics will try to decipher its writer-director’s attitude, while the public will mostly respond to the ghoulish twists and kicks, of which there are plenty. From a dramatic point of view, there are several gaping holes, notably the unexplained disappearances of certain characters, and cheap dramaturgical conveniences, such as the absence of outside-world lifelines like phones and cars and the willingness of mother to go along with what’s happening for far too long. But these are par-for-the course issues in such fare.”

“Aronofsky doesn’t lean towards claustrophobia. He externalizes his lead character’s horror into the foundations of the very house. The house bleeds, it has oddly human-looking orifices, it has a beating heart. Aronofsky sends his characters into a nightmarish dreamscape that grows and evolves, particularly in the bonkers last third, which builds in pitch, scope, and sheer cinematic audacity, picking up overt religious and political resonances.”

“The movie is clearly a thinker, because what follows is at turns a metaphor for a crumbling world, and a deep and personal reflection on the creative process, full of apocalypse imagery and echoes of Goya and Bosch. Tweets reflected a sense that mother! might have to sit with viewers to be fully understood.”

“…Aronofsky’s film is ultimately concerned with the parasitic nature of the male artist; how he drains the lifeblood from all those around him in the name of creativity and ego fuel. In that sense, it’s a remarkably self-absorbed film, and one that, allegorical or not, feels like an agonized mea culpa from the artist (Aronofsky) to those in his personal orbit.”

mother! will arrive in theaters on September 15. 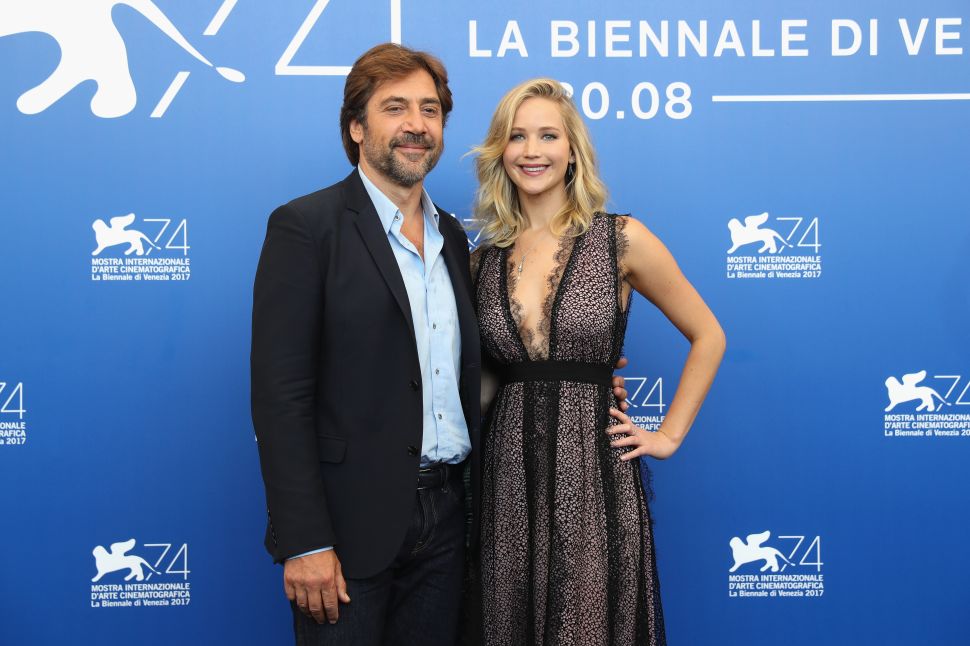