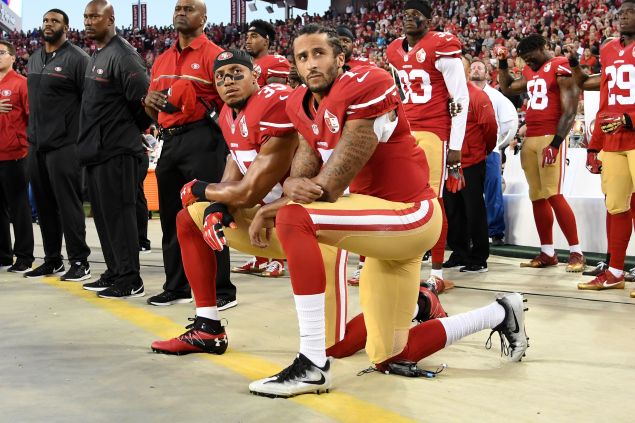 Colin Kaepernick and Eric Reid of the San Francisco 49ers kneel in protest during the national anthem prior to a game last year. Thearon W. Henderson/Getty Images

Mayor Bill de Blasio said President Trump’s attacks on NFL players who kneel during the national anthem were racially motivated because race has “something to do with almost everything Donald Trump says.”

At a rally in Alabama last week, Trump said NFL team owners should fire players like Colin Kaepernick of the San Francisco 49ers, who has been attacked for kneeling during the national anthem to protest racial injustice and the comparatively high levels of police use of force on blacks.

“Wouldn’t you love to see one of these NFL owners, when somebody disrespects our flag, to say, ‘Get that son of a bitch off the field right now — he’s fired,'” Trump said at the rally.

Trump said on Twitter on Monday that his comments had “nothing to do with race” and were about respect for the flag. De Blasio dismissed that statement in response to a question at an unrelated press conference in Manhattan on Monday afternoon.

“Race has something to do with almost everything Donald Trump says,” de Blasio said. “When are we gonna get this through our heads? Let’s be clear: I have said he’s a racist before and I’ll say it again. Look, there’s this kind of sick term we use … when people use racial-coded language. He doesn’t bother with the coding a lot of the times, he just goes right to it and that’s true.”

He referenced a recent Politico article that, he said, explored the roots of Trump’s “overt racism” in the 1970s and the 1980s and “the way he handled things in New York City.”

The article notes that Trump spent $85,000 on full-page ads in New York’s four daily papers calling for the death penalty for five black and Hispanic men who were wrongly imprisoned for and eventually exonerated of the 1989 rape and beating of a female Central Park jogger. DNA evidence cleared them in 2002, and the city settled their wrongful imprisonment suit for $40 million in 2014.

“Of course that’s part of what’s going on here and it’s sad, and I don’t think it’s going to work,” de Blasio continued. “I think his concept, it’s this Steve Bannon-inspired, incessant interest in a narrow political support base that sadly, a lot of whom wanna hear that. That’s not the majority of Americans. That’s not the swing voters. It’s a ridiculous, morally unacceptable and ridiculous political strategy but he’s gonna do it over and over and over again.”

De Blasio has said that the Pledge of Allegiance and saluting the flag during the anthem are an affirmation of the country’s democracy “that is still evolving, that needs to get better, that needs to be truer to who we are and what we are supposed to be.” Still, he said that he respects everyone’s First Amendment rights and “what’s motivating this protest.”

He reiterated those sentiments in the wake of Trump’s comments. 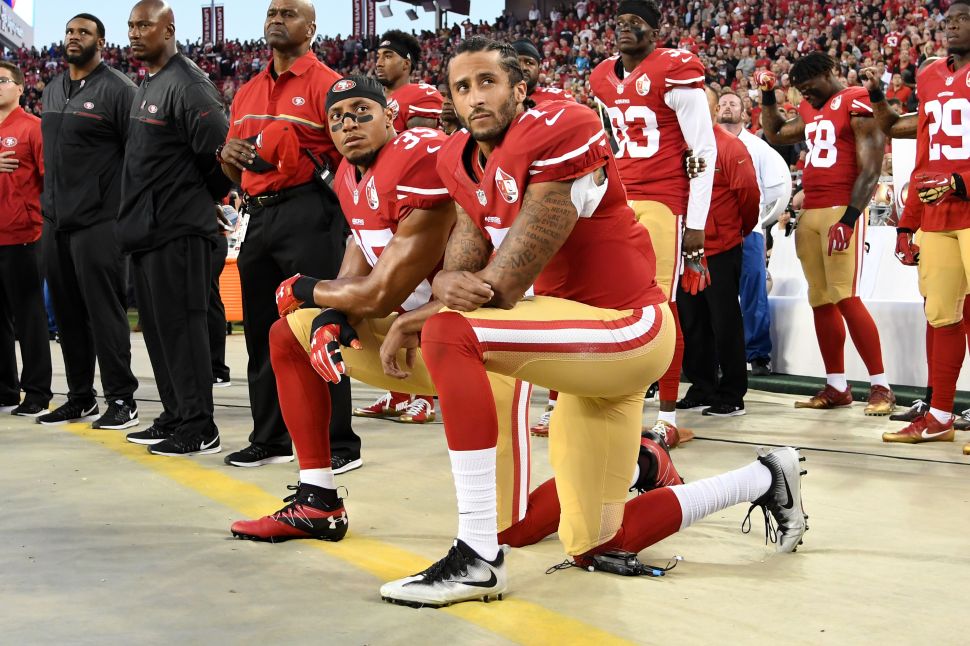