One “diplo-military” after shock was visually sensational—and it was supposed to be.

On September 23 USAF B-1B bombers escorted by F-15C air superiority fighters flew in international air space over the Sea of Japan east of North Korea. The planes, however, flew north of the line defined by the Korean Demilitarized Zone (DMZ). The B-1Bs took off from the Air Force’s strategic base on Guam, Andersen Air Force Base.

The F-15C escorts flew from a base on the island of Okinawa.

A show of force is a type of diplomatic action that uses military assets to demonstrate will and capability (hence the diplo-military description). A show of force is not an act of war. A U.S. Navy Freedom of Navigation Operation (FONOP) is common show of force.

A carefully orchestrated show of force, however, can include components of a combat operation.

On September 23rd, Air Force warplanes didn’t try to evade detection; they were supposed to be seen. They were not flying what aviators call an “attack profile.”

Several of North Korea’s most important nuclear weapons development sites and ballistic missile test facilities are located in its northeastern quadrant. Aircraft flying east of North Korea and north of the DMZ could quickly strike those facilities.

The flight path was the key diplomatic message. The U.S. and its allies have weapons that can approach and attack those facilities from any direction (examples include cruise missiles and drone-delivered munitions). However, the facilities in the northeast are definitely vulnerable to an attack from the sea, particularly with air and sea delivered stand-off weapons.

In March, Secretary of State Rex Tillerson said “denuclearizing” the Korean peninsula is the goal of the Trump administration, Japan and South Korea.

Denuclearization requires halting and then eliminating North Korea’s nuclear weapons and ballistic missile programs. However, war on the Korean peninsula puts millions of lives at risk. It could also quickly become a regional war, involving the U.S., China and Japan.

Some analysts saw Trump’s executive order of September 21 as a declaration of economic war on North Korea.

Could an economic war stop North Korea’s strategic weapons programs? As the 38 North analysis points out, Washington would have to make its embargo “stick globally.” That’s a tough diplomatic and economic task.

North Korea’s nuclear weapons and ballistic missile programs may have advanced beyond the point where economic strangulation can halt them, no matter how total the embargo.

If that’s the case, then the Obama administration’s policy of “strategic patience” failed utterly, and Bill Clinton’s 1994 Agreed Framework was its hideous forerunner.

If North Korea’s weapons programs are beyond the reach of economic strangulation, then it is possible the Kim regime believes it has outfoxed Beijing as well as Washington. Beijing has stepped into a war trap. Keep paying us off, China, Kim Jong Un says, or I’ll start The Big One.

Which, unfortunately, brings us back to contemplating military options.

Pyongyang understood the message behind the flight path. On September 25, North Korean Foreign Minister Ri Yong Ho responded with a rhetorical explosion. He claimed that the U.S. had declared war on his country.

“Last weekend Trump claimed that our leadership wouldn’t be around much longer and declared a war on our country,” Ri said, citing a tweet Trump made. Then he added, “Since the United States declared war on our country, we will have every right to make all self-defensive counter measures, including the right to shoot down the United States strategic bombers at any time even when they are not yet inside the aerospace border of our country.”

That’s right, North Korea claims it has the right to intercept U.S. aircraft in international air space. Shooting at a U.S. aircraft that is not conducting an attack, however, would be an act of war.

On September 23, Ri said that a North Korean missile attack on the U.S. mainland was “inevitable” because Trump had insulted North Korea’s dignity. That tells us Trump’s latest taunts struck their target: dictator Kim Jong Un.

Recall Kim howled when Sen. John McCain called him a “fat kid.” McCain did a fine job of belittling Kim, and belittling Kim was McCain’s intent. McCain is a complex man, and he understands that psychological warfare is a very potent form of warfare.

Everyone saw Kim’s response to McCain, among them President Trump. Trump’s insults are more creative and flamboyant than McCain’s. Trump’s nicknames, like Crooked Hillary and Rocket Man, are such damningly effective political caricatures they become psychological weapons.

Within the last year, Kim Jong Un has murdered his half-brother and several senior military officers. He has internal enemies. There are powerful people in North Korea who know Kim Jong Un’s threats to attack the U.S., Japan and South Korea with nuclear weapons has put their lives and North Korea’s existence in mortal danger.

In July I called it Option 5:

What does Pyongyang want? The murder of Kim Jong Nam suggests one key objective: to retain Kim Jong Un’s control. Encouraging a North Korean Army coup sounds great, and if you know the faction who would do it, contact CIA immediately. Targeting Kim with a missile or aircraft-delivered munitions is extremely difficult. Moreover, his (Kim Jong Un’s) death may not lead to denuclearization and attacking him would be an act of war. 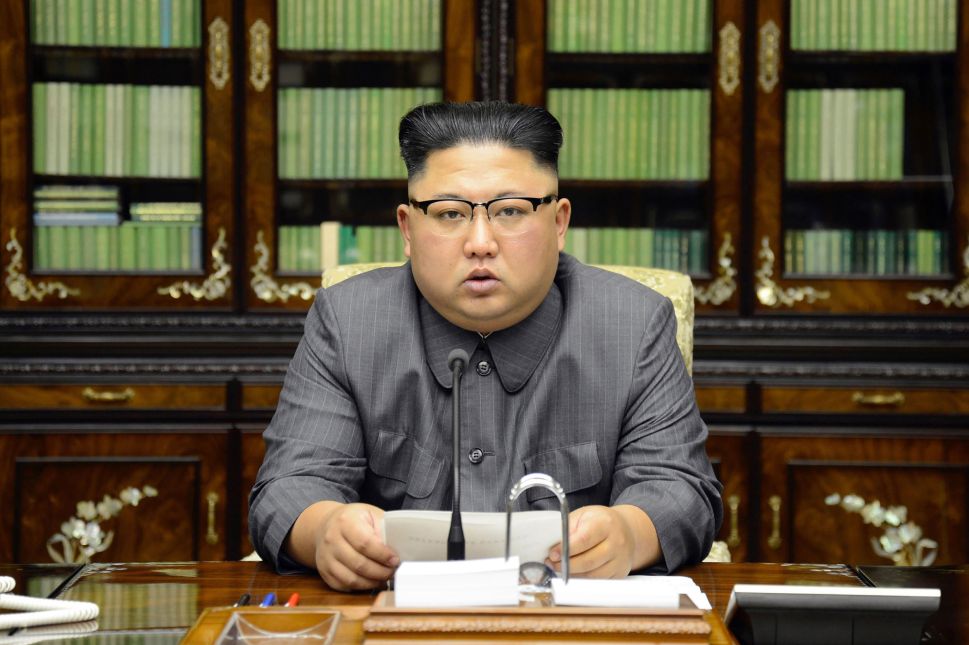