On Wednesday, OKCupid announced that they #StandWithPP, launching a new initiative that asks users “Should the government defund Planned Parenthood?” and placing a badge on the profiles of those who indicate that they support government funding of the controversial organization. Virtue-signaling across more traditional social media is nothing new; over the past several years, we’ve seen a wide range of badges pop up on the profile photos of friends and acquaintances—commemorating 9/11, expressing solidarity with victims of terrorist attacks, or promoting the fight against breast cancer, to name a few.

But OKCupid’s new feature goes beyond fundraising for the organization and giving users a digital bumper sticker. This new feature also allows OKCupid’s algorithm to filter and “promote like-minded daters to one another.” When asked if people would be matched with individuals who have answered this question the same way as one another, OKCupid commented that “you will be matched primarily, not exclusively, with users who have similar beliefs.”

This feature and partnership is the first of its kind, and was pursued by OKCupid after a “huge response” from the site’s community to the question “Should the government defund Planned Parenthood?” per CMO Melissa Hobley, who called Planned Parenthood a “dream partner.”

Though the company is demonstrably excited about this initiative, on deeper examination, this new feature does have the potential to exacerbate a number of social quandaries our country is grappling with.

America looks and feels increasingly divided, with the internet and social media making it easier for people to curate what information they see and live in a bubble that, rather than educates them, reaffirms their preconceived beliefs. David Bernstein, in The Washington Post, used the shock of Hillary Clinton supporters at the outcome of the election to illustrate why this is problematic:

“Why didn’t members of the Clinton campaign pick up on the fact that there were few votes to be gained from the first-female-president theme? I suspect it’s because they and just about everyone they socialized with were, like my liberal Democratic friends, excited by this. Living in the liberal bubbles of elite New York and Washington, they significantly overestimated how much this excitement was shared by the public at large.”

Taking into account the increasing tendency for people on both sides of the political aisle to live in worlds of confirmation bias, some find the notion of a company encouraging people to pursue social or romantic interaction with only those who they agree with on political issues to be a downright frightening development:

Political tribalism has finally entrenched itself in dating. RIP individualism.

Beyond these issues, which speak to a crisis of conscience that our nation has struggled with for several years now, this new feature also presents potential logistical issues that may end up creating challenges for users, particularly Pro-Planned Parenthood female users, many of whom are likely to be college-educated.

I spoke with author Jon Birger, whose book Date-onomics: How Dating Became a Lopsided Numbers Game is a must-read for single women. The book’s central thesis, proven by exhaustive demographic and sociological research on the dating lives of Americans, is that “It’s not that he’s just not that into you—it’s that there aren’t enough of him.” In other words, in many places in America, there are more college-educated, heterosexual women looking for a partner than college-educated, single men.

Birger’s research shows that in general, “educational intermarriage is less common today than at any point over the past half-century.” This applies to both genders, but it’s a poorly-kept secret that women who date less educated men face different challenges navigating how they sell their “mixed-collar” relationships to the outside world—and themselves. The first time I recall this being consecrated in pop culture was nearly 20 years ago on Sex and the City, when Harvard-educated lawyer Miranda Hobbes began dating Steve Brady, a New York bartender, and her eventual husband:

Miranda: It’s like, when single men have a lot of money it works to their advantage, but when a single woman has money, it’s a problem you have to deal with. It’s ridiculous!

Though nearly two decades have passed since Miranda and Charlotte’s exchange, there have been countless think pieces on the issue, proving that it hasn’t gone away, and that women continue to feel pressure to pursue partners of equal, or greater, educational attainment.

How is this problematic in the context of OKCupid’s new feature? College-educated women seeking a partner have a difficult enough time—they have to contend with a man deficit and societal pressure to avoid “dating down.” Per Gallup, only 28 percent of college-educated men support legal abortion in any circumstance, versus 35 percent of women—a significant difference, amplified by the fact that there are already 33 percent more women aged 22-29 with a college degree than men with a degree, and 23 percent more women than men in the 30-39 college grad demographic, per Date-Onomics.

Though OKCupid couches their support of Planned Parenthood as being supportive of affordable healthcare, the unavoidable fact is that the image of organization is closely tied to the issue of abortion. Birger pointed out that the filters in sites like this can keep users from “seeing the dating profiles of some people they’d probably click with, if they gave them a chance,” and expressed the concern that “It will lead to the same sort of divisiveness in the dating world that we see in the political world. Progressives only dating progressives and conservatives only dating conservatives. Which is not only sad and boring, but will lead to bad dating outcomes.”

Many would argue that dating now is harder than it ever has been. The proliferation of text messaging cuts out the nuances of human interaction that change the meaning of the things we say, or type. Hookup culture has all but made it socially unacceptable to demand accountability in our sexual encounters and relationships. And of course, there are the demographic shifts outlined by Birger that have hit heterosexual, college-educated women seeking a partner particularly hard.

When asked if they thought this feature would create an overpopulation of women vying for a smaller pool of men, Hobley commented “we’re not worried about that.” However, with all of the obstacles in the pursuit of love and relationships, and the demographic realities, it is quite possible that by implementing their #IStandWithPP feature, OKCupid may be creating yet another barrier to the opportunities their users have to meet the kind, relationship-oriented people they purport to want to date.

Candice Greaux is a communications consultant who splits her time between NoVA and NJ. Political junkie, crazy cat lady, and wannabe-yogi, she eats every meal like she truly believes it will be her last. 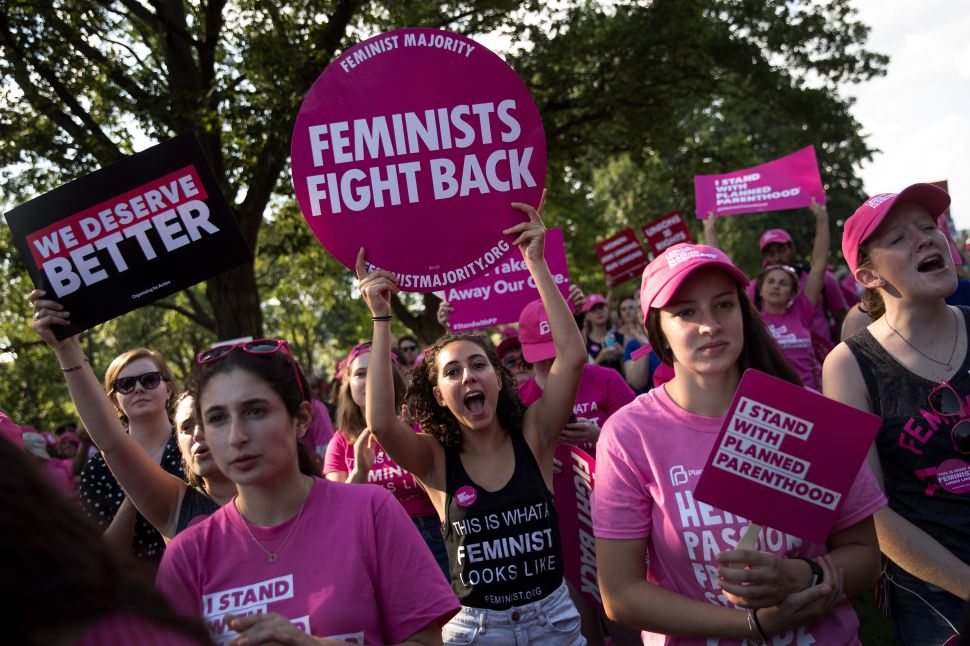