A viewer of Sean Hannity’s show on Fox News Channel on Monday night would not have known:

But Hannity managed to report one piece of news that will be significant in the cable news competition. With Laura Ingraham to take Hannity’s 10 p.m. hour next month, Hannity will move into the 9 p.m. hour—starting next Monday—to go head-to-head against The Rachel Maddow Show on MSNBC.

Maddow is a formidable foe. Hannity’s show is right-wing, conservative, Republican and calcified. Her show is left-wing, liberal, Democratic and ascendant in audience following. Here’s how Hannity put it.

“In the month of August… we were number two in cable because—for some bizarre reason—conspiracy-theory TV is working right now,” he said.

Of course, he was referring there to Maddow, but he didn’t mention her by name, as he often does when he mocks her body language and stories. Instead, he merely belittled her reporting, which is far more sophisticated than his and more reflective of reality. But Hannity couldn’t diss her ratings.

In August, Maddow beat Hannity and all other Fox shows as America’s right-wing propaganda factory reeled from a series of sexual harassment scandals that led to the departure of several star anchors. Maddow also is consistently stronger than Hannity among younger viewers who buy what they see on commercials.

Some of the holes in Hannity’s version of “news” in Monday’s telecast were due to the format of his canned and stale show, which is called Hannity. He pre-records it for its 10 p.m. slot on weeknights. So, by design, he misses major breaking stories, especially those regarding Russian espionage and the Trump gang.

Other Hannity oversights are due to bias. It does no good for Hannity’s special bromance with “Mis-tah Trump!” to report all that loose-lipped law-talkin’ by lunching men who defend white-collar criminals.

But, starting next Monday, Hannity must compete against a show that airs live and puts facts together in ways that place singular events into larger context. And it’s not only Trump’s Russia scandals that give Maddow an edge against Hannity in this autumn’s competition.

This Monday, for instance, a Maddow segment examined the continuing effort by congressional Republicans to destroy the American health insurance system. Instead of just spouting talking points and mouthing buzz words, as Hannity does, she interviewed someone in power with first-hand experience.

Her guest was Mazie Hirono, the Democratic senator from Hawaii. She is a victim of Stage 4 kidney cancer who said she’s “not out of the woods yet” on her illness.

“The good thing is, I have health care coverage, which millions of people in our country do not have,” Hirono said. “The Republicans are hellbent on getting rid of health care for even more millions.”

Hirono said there is a difference between Democrats and Republicans.

“Democrats believe health care is a right, not a privilege,” she said. “Obviously, Republicans consider health care a commodity they think we should go out and buy the way we buy a car or a TV.” She said the GOP has an “obsession to eliminate” health insurance and that she can’t understand why.

Such perspective on health care is rarely heard on Hannity, where the subject invariably leads to the right-wing effort to “repeal and replace Obamacare.”

When Hannity and Maddow eventually face off, the “third man in”—as they say in hockey fights—will be, on some nights, Anderson Cooper on CNN with a second hour of AC-360. On Tuesday, in the CNN style of live reporting, much of his 9 p.m. hour was devoted to the Mexico earthquake and visuals from there.

Also on the menu was coverage—lots of visuals, too—of a hurricane moving toward Puerto Rico. Then came more reporting and panel conversation about Manafort.

The CNN audience, although smaller than the other two, might tip the 9 p.m. balance in favor of Fox because, like MSNBC, CNN deals in reality and divides those viewers. Fox has no such constraint. Soon it will be known if Hannity can reverse the decline of his network’s image and ratings or further drive them down. 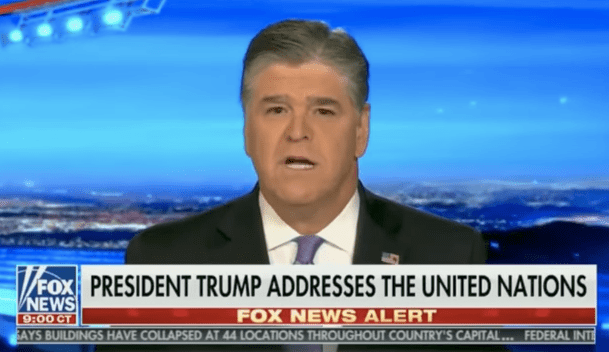