It all started with in the back of a cab. “I had this idea of Karen teaching [her maid] Rosario how to rock climb because if President Trump built his border wall Rosario would need to know how to do that,” explained Max Mutchnik, executive producer of Will & Grace, talking about the idea that sprang to life while skimming the news in transit one day.

That idea didn’t immediately blossom into a reboot of the series, but a wildly popular skit featuring the core cast of Will & Grace, produced as an endorsement for Hillary Clinton during the 2016 presidential election, proved that there was still immense audience interest in the series.

For a little perspective about what’s happened in society in the intervening years since the show originally aired—or to really understand just how much time has actually passed—here are a few things that have changed since the series bowed out in 2006: The first iPhone hadn’t even been released yet, no one had really heard of the Kardashians, Britney Spears and Kevin Federline were still married, Miley Cyrus was still Hannah Montana, crocs were fashionable, The DaVinci Code and Borat were big in theaters and Taylor Hicks had a number one song.

“People kept asking, ‘did you think about the show after it was over,’ and we absolutely did not. It was over when it was over,” Mutchnick told the crowd at the Tribeca TV Festival recently. “It wasn’t something that we ever planned on doing again. But now that we’re doing it we’re going to get a chance to have them say things that we hadn’t thought about the first time around.”

An example? “After the night we shot the finale, all those years ago, I was watching an I Love Lucy episode where Lucy and Ethel end up in a dunk tank and I thought, ‘why didn’t we ever do that?’ Now we get to do it. Spoiler alert, watch the third episode.”

When revisiting a fan favorite, the pressure to appease everyone can be daunting, but that’s not even a factor in Sean Hayes’ (Jack McFarland) mind. “Yeah, there are a lot of eyeballs on this, but you don’t think about it when you’re learning lines and rehearsing. That’s the wonderful thing about being an actor; you don’t necessarily have to accept that pressure. You can only do the job you know how to do.”

A recent rash of returning series—Twin Peaks, Gilmore Girls and the forthcoming Rosanne—seem to make the case that, as is oft said, everything old is new again.

In this case though, Will & Grace, rather than feeling like a reboot, seems more like a continuation of the story in that not much has changed—the characters are all still virtually in the same place as they were when we left them. (The events of the original finale are explained away in the first episode of this new season.)

While it starts out a little clunky, opening with a political episode that feels rather awkward and contrived, by the third episode the series has hit its stride, back doing what it does best—telling a very funny story that has some subtle sentiment nestled in a relatable underlying theme. In short, it’s everything everyone hoped it would be.

It’s a pleasure to watch as the narrative focuses on the core foursome and their unusually delightful self-centered problem-solving skills.

David Kohan, who co-created the series with Mutchnick, has admitted that he was worried about damaging the legacy of the series, which ran for eight seasons and garnered 16 Emmy awards during its tenure. “What those 11 years did was make us realize that what you have to do. So, we began working with the mantra to make this Will & Grace the same or better.”

Mutchnick laughed as he added, “We gave every single part of the show a facelift—except [for the four actors].”

Debra Messing, who plays title character Grace Adler, believes it’s the relationship among the actors that remains the strongest asset of the show’s winning recipe. “There’s something about our connection that’s ageless. I think when we’re 70 we’ll still have that,” Messing said. Megan Mullally (Karen Walker) agreed, adding, “When you have that chemistry, that never goes away.

When it debuted in 1998, the series was considered groundbreaking by featuring bold gay characters, but now, with marriage equality, can the series still be relevant moving forward?

On this topic, Messing remarked, “The thing I’ve loved about the show since the beginning is that it’s built into the DNA that within the comedy we’re shining a light on what’s happening in culture, in politics, right now. Eleven years later the conversation has expanded and we’re going to talk about what’s happening now.”

Mullally added, “I think we have a lot more leeway now because when we were on the air, at least for the first few seasons, there were no other shows on the air that had gay characters. We were standing alone.” She laughed as she added, “Now if you don’t have at least four gay characters people are like, ‘what is this piece of shit?’”

As for story content, there are strong comments about the struggles of each generation, the importance of knowing your worth, and realizing one’s physical limitations. But, mixed in with these messages there’s still the inherent wackiness that makes the series downright fun—jokes about boobs, Botox and compression garments—all littered with outrageous physical comedy.

All of the updates work and coupled with the witty wordplay, which continues to be a staple of the series, these episodes roll seamlessly into those from the past. Exclude the pop-culture quips, the new cellphones and other tech advances, and viewers might actually confuse the past and present in this crazy Will & Grace world, which is a good thing.

Larry David Talks Trump, Turning 70 and Being a Quitter
Carlton Cuse Explains ‘The Strain’ Finale
Come for the Killer Obstacle Course, Stay for the Backstories on ‘America Ninja Warrior’ 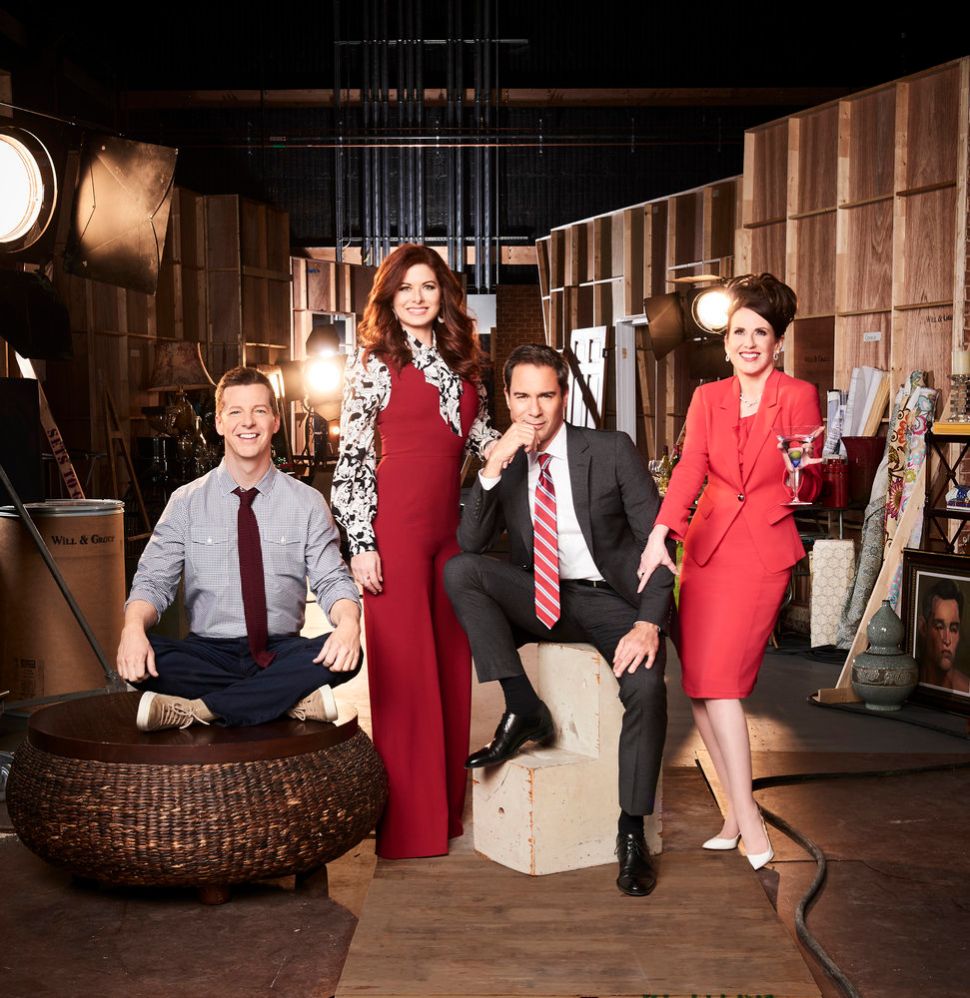