For an actor more talented than his reputation allows you to believe, Tom Cruise does nothing to improve his sorry status quo. Unlike Jake Gyllenhaal, Ryan Gosling, Eddie Redmayne and a few others who take risks that pay off, Cruise eschews roles that challenge, stretch, inspire and win awards. He just keeps on turning out the same old formulaic crowd-pleasers that make money and move on to late-night cable. American Made is a perfect example.

Hack director Doug Liman (The Bourne Identity) is lucky to engage Cruise’s box-office appeal for a tale that otherwise would never have seen the light of day. For this is a tale about Barry Seal, the rogue TWA pilot from Baton Rouge, Louisiana, who became a multi-millionaire lying, cheating, cocaine smuggling and money laundering while working as a double agent for the CIA. It’s a perfect role for the star, but even Mr. Cruise’s boyish gym-workout charisma and passion for performing his own bold and dangerous stunts can’t make Barry Seal a lovable character, although he knocks himself out trying. The facts, collated in a fuzzy and jumbled screenplay by Gary Spinelli, are partly documented and partly made up in a movie that claims to be both “based on a true story” and “based on a true lie.” Figuring it out, you’re on your own. Despite brisk pacing that bounces from one exploit to the next with ping-pong fury, I can tell you that neither the film, nor the loopy character who inspired it, are as fascinating as the director, writer and star think it is. Barry Seal was a lying, coke-snorting hustler and master criminal whose major accomplishment was a talent for eluding the law at every turn.

When first we meet, he’s a charming, lovable commercial pilot who left TWA to seek more lucrative ways to rake in money—first after he was approached by a CIA spook in 1978 to take aerial “reconnaissance” photographs of Honduras, El Salvador and other U.S. enemies, then secretly ferrying cocaine to Miami for the Medellin drug cartel. The story is scarcely off the ground before the poetic license begins to pile up, in a film Director Liman calls a “fun lie”. The real Barry Seal was a 30-pound slob who looked nothing like Tom Cruise. He did not quit his job because he saw a chance to make a fortune as a drug-smuggling CIA operative. He was fired for smuggling explosives to an anti-Castro gang in Cuba. When federal agents started closing in, he moved his pregnant wife and two kids in the dark of the night to Arkansas, where he graduated from taking pictures and moving AK-47s, to transporting contra rebels to the backwoods where they could fire guns, eat pizza and ogle American pinup magazines. It all seems preposterous, especially the scene where Barry flies his wife Lucy (Sarah Wright) to meet the Colombian drug kings, parties all night, and has sex in the cockpit on the way home. He also becomes a local Arkansas hero, sponsors Little League baseball, and finances so many illegitimate businesses to launder the millions he’s raking in that the local bank gives him his own storage vault. The thing that entertains the audience (who has declared this circus a box-office winner) is the assumption that it is all true. They find it amusing to watch a gonzo pilot crash-land a Cessna filled with 200 kilos of cocaine on a residential street and hand over stacks of money to a gobsmacked child while escaping on the kid’s bicycle. They don’t seem to mind that most of it is as phony as a plastic banana.

Doug Liman has constructed American Made in the dubious style of an action comedy. Seal is depicted as a doofus, the government crackdown on drugs is intercut with scenes of Ronald Reagan in Bedtime for Bonzo. It’s only a matter of time before his luck runs out, the Drug Enforcement Administration gets wise and the game ends. But waiting for the outcome is heavy slogging, and even then, in custody, Seal grins like Tom Cruise and gets reprieved by Arkansas governor Bill Clinton while the attorney general waves goodbye. The White House seizes an opportunity to praise him for rounding up the Nicaraguan Sandinistas, Nancy Reagan hires him to work for her “Just Say No” program, and instead of 30 years in Leavenworth, all he gets is 1000 hours of community service.

The more facts it uncovers, the sillier the movie gets, but as a typically American fact-based fairy tale, it has a certain inescapably morbid irony that is hard to overlook. Without realizing it, American Made is a wincing metaphor for Tom Cruise’s movie career—which, come to think of it, is exclusively and embarrassingly American made, too. 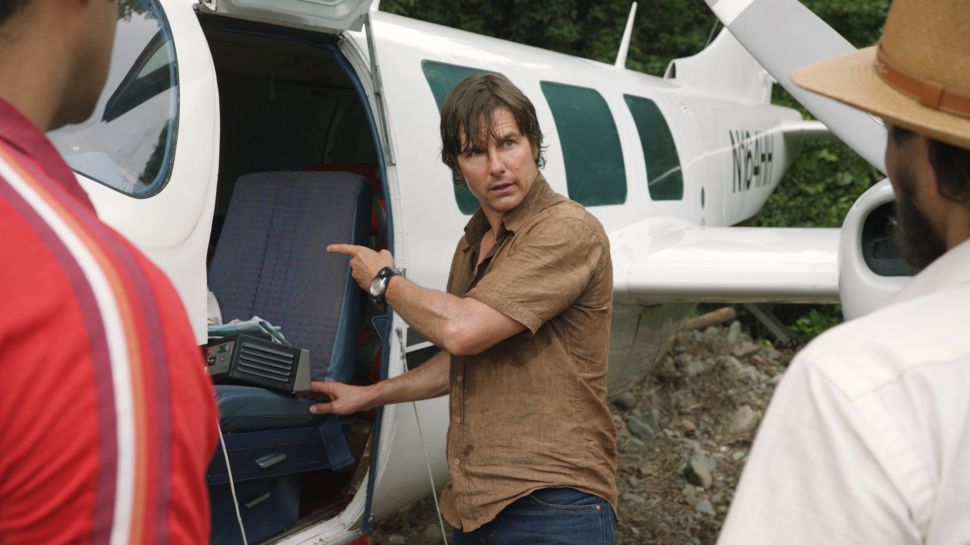