Judi Dench can do no wrong, and playing Queen Victoria for the second time in the richly satisfying Victoria and Abdul is an acting lesson par excellence that proves how rapturous it is to watch this great artist do everything right.

Tertiary biographical footnotes to history are always popping up in the movies, and the legendary monarch seems to be a fertile source for many of them. Contrary to the starchy profile taught in history books, Vicki was quite a dame. The second longest reigning ruler in British history, she was a progressive leader in the enlightening Industrial Revolution in the 1880s in the same lurid decade that produced Jack the Ripper, the Elephant Man, Sweeney Todd and Oscar Wilde. Daring, curious, and well-read, the bored Queen apparently had numerous flirtations with younger men after the death of her husband Albert, and one of her sons, the Duke of Clarence, is still believed by some historians to be the actual Jack the Ripper. Victoria and Abdul, set in the autumnal years preceding her death, unravels the layers of her little-known relationship with a young Indian Muslim named Abdul Karim, a nondescript prison clerk dispatched from Agra in 1887 to present to Her Royal Highness a ceremonial gold crown honoring the 29th year of British rule in India. The opening scenes contrast the lowly public servant’s arduous 5000-mile journey accompanied by a dyspeptic companion who resents everything about the empire with the pomp and pageantry of a royal banquet, followed by a lot of royal snoring. At the lavish reception, Abdul does everything wrong, but although his ignorance of protocol and etiquette disrupts the rules, his inadvertent irreverence awakens the aging monarch’s dormant sense of amusement. To the horror of the pompous snobs in the court, including the mortified Prime Minister Lord Salisbury (Michael Gambon), and the Queen’s son Bertie (Eddie Izzard), who succeeds her as King Edward VII. Blasé and jaded, Vicki nevertheless succumbs to Abdul’s charm, forms an instant bond, and makes him her chief confidante, regaling in his tales of adventure and romance, making him her personal companion, and imploring him to teach her everything about Indian history and culture from how to read the Koran to a passion for eating mangos.

While the Queen’s faith is shattered when she learns it was the Muslims whose actions killed 2,000 British soldiers, her disillusion is temporary and she makes Abdul and his family an integral part of the royal household, going so far as awarding him a knighthood for his services to the throne.  Plotting to banish him from England forever, the powers behind the crown are on the verge of executing him for treason when the Queen at last becomes too ill and frail to protect him from the rising tide of jealousy and racism, and Abdul escapes with his journals. Not published until 2010, it’s those personal records that form the basis for this film. I find it hard to believe this alien invader to Buckingham Palace was sitting beside the most powerful woman in Europe on her deathbed and I doubt if Bertie cussed up such a blue streak on the eve of becoming the next ruling monarch. But  whatever poetic license there is to raise eyebrows, it serves the clever script by Lee Hall and the  impeccable direction of veteran filmmaker Stephen Frears admirably. From the Taj Mahal to the sumptuous court at Windsor Castle, every scene is gorgeous to look at, every shot magnificently detailed and richly framed. And the exemplary performances are as good as it gets in movies today. The British establishment is shown as self-serving and heartless, while Judi Dench as the adored Queen, expanding the similar force she showed as Victoria in John Madden’s 1997 film Mrs. Brown, rises above it all majestically—brittle but warm, stubborn but querulous, and capable of both larky humor and touching vulnerability. She rules with imperial power, but reveals heartbreaking tenderness when she wanders in the garden with the aid of a walking cane or  confides in Abdul about her loneliness in the 30 years since Albert’s death. And Ali Fazal, a star in imported Bollywood flicks, lends devoted support to the star and to the top-tier cast of distinguished Brits who lend grace and knowledge to a bird’s-eye view of life behind the throne that is a royal triumph indeed. 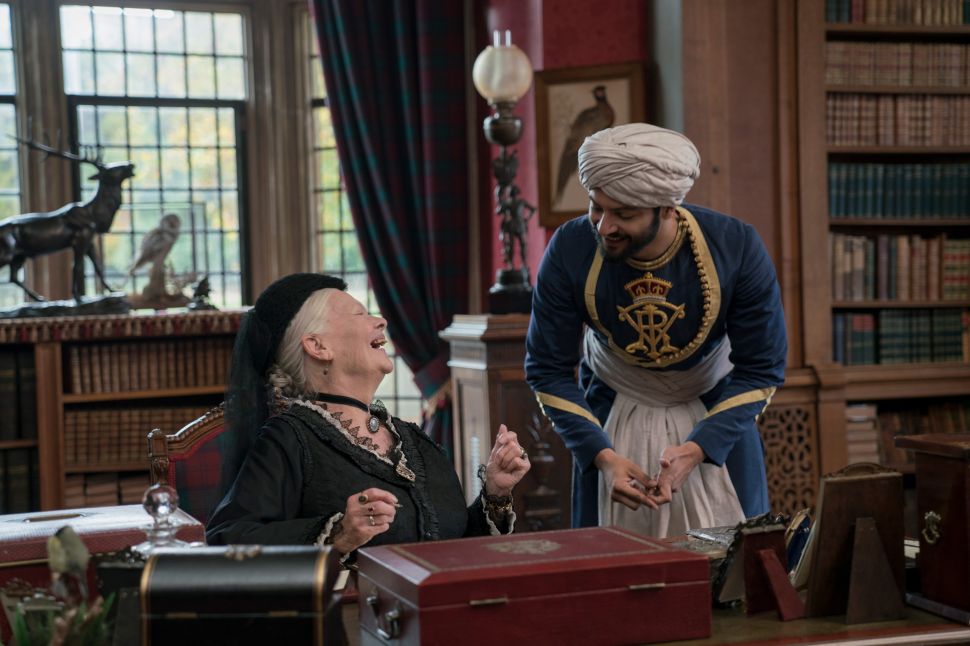