Following in the reverse trend of musicals and plays inspired by movies, Matthew Bourne’s full-length ballet, The Red Shoes, which made its U.S. premiere at the Ahmanson Theater in Los Angeles this month, closely mirrors the iconic 1948 Oscar winning film of the same name by Michael Powell and Emeric Pressburger. This production first premiered in London last year to high praises, and it seems little changes were made before the show crossed the pond.

Lez Brotherston’s set design is minimalistic, but exquisite in its attention to the detail of glamorous 1940s Monte Carlo. With the rotating of a theatre-sized red velvet curtain, the audience seamlessly transitions from watching the ballet within the ballet to being privy to the backstage drama of the fictional Lermontov Ballet. Paule Constable’s lighting, in concert with Duncan McLean’s intricate projection designs, make it so you can almost smell the salt air during a beach party scene, and later want to reach for a sweater when the story shifts to the unforgiving streets outside Covent Garden.

Bourne’s choreography is brilliant. Every sequence is imbued with either humor, passion or extreme vulnerability. I’d love to say that The Red Shoes is the best new ballet production, but for that to be true, one key aspect would have to change: the dancers.

The very first moment the audience sees lead character Victoria Page posing in the famous red pointe shoes, I expected to be filled with excitement, fear and awe. But when dancer Ashley Shaw, who originated the role in London, appeared in dramatic silhouette, and wasn’t fully on top of her pointe shoe box, my high expectations deflated.

Outside of the libretto, Victoria falls in love with the conductor, Julian Craster, something that company impresario, Boris Lermontov, absolutely forbids. He fires Craster without hesitation and gives Victoria an ultimatum. She can either keep performing The Red Shoes, or run away to be Craster’s wife.

Victoria chooses to get married, but soon regrets the decision and develops spite toward her husband for ending her budding career, while he quickly grows depressed without his orchestra. Victoria tries to return to Lermontov Ballet, but while warming up backstage, she again starts to second guess herself. This internal battle of having to decide between true love and career proves to be too much. Unable to choose, Victoria runs off in front of a moving train and commits suicide. Was this life imitating art? Or was art imitating life? In the end, it’s up to you to decide.

But one wonders why Bourne didn’t cast principal ballet dancers for the technically demanding roles of Victoria and Lermontov’s flamboyant ballerino star, Ivan. He could’ve plucked talent straight from American Ballet Theatre, or The Royal Ballet, but he didn’t. This must’ve been deliberate choice.

In the playbill, a personal message from Bourne is printed. “I dedicate this show to all the Victoria Pages, past and present, who have ever felt the lure of the red shoes and the need to express themselves through dance… thank you for the continued inspiration.”

So perhaps Bourne’s vision of Victoria Page is far different from the exceptionally talented ingénue presented as in the movie. Shaw is more of the everywoman; a passionate artist who is relatable in her willingness to suffer and sacrifice everything for her craft.

Moira Shearer, who famously played this role in the film, was a real ballerina. And while she was not on the level of Galina Ulanova, who was prima ballerina of The Bolshoi Ballet during this era, it was at least believable that a director of a highly respectable company would look at her and see star potential.

With Shaw dancing lead, Bourne successfully removes the question that rattled many while watching the movie: why doesn’t Victoria merely take a job with another ballet company? But Bourne’s Victoria can’t leave Lermontov’s tutelage. No other ballet company is going to celebrate her talent the way Boris does.

Without the help of dialogue, a few layers of the dark plot points explored in the film get lost. In the movie, Craster’s obsession over Victoria comes from a passionate, albeit psychotic pursuit of artistic perfection. He believes that there’s no way Victoria can reach her full potential as a dancer, and be a wife. In the ballet, Boris, performed by Sam Archer, wants Craster out of the picture because he’s also in love with Victoria. Archer delivers a refined, less demented version of Boris, and performs the role with just the right amount of egotistical pomp and circumstance.

Liam Mower is hilarious as Ivan. A walking definition of the millennial-coined term “extra,” Mower plays the ballerino star with such vibrancy and impeccable comedic timing it’s impossible not to love him. But when the choreography calls for him to perform multiple pirouettes, or jeté across the stage, it becomes amateur hour. His feet not always pointed, legs not fully extended behind the knees, and not once did his ala second leg did make it to the side while performing fouettés.

With the exception of The Red Shoes sequence, Shaw performs most of the ballet in flats, which makes it all the more apparent that dancing in pointe shoes isn’t her specialty. She excels barefoot. During the “I hate you, but I love you” bedroom pas de deux with Craster, danced by Dominic North, Shaw moves with impressive fluidity, and affectingly expresses how the internal struggle of having to choose between her two main passions in life is ripping her apart.

The golden moments of this production come from the comedic breaks. Aside from Michela Meazza’s purposely phoned in performance of Les Sylphide, which is a riot, the best performance of the evening belongs to North as Craster. The modern solo North dances when Craster finally finds the inspiration to pen the score for The Red Shoes is a pitch perfect physical interpretation of what’s happening in one’s head during an all-encompassing, creative divine intervention.

So whether you’re like Val from A Chorus Line, and have “never heard of The Red Shoes and don’t “give a fuck about The Red Shoes,” or are more the Broadway musical’s Diana, who claims to have seen the film 112 times, Bourne’s production makes for good laughs and memorable moments. It’s fun. But if you’re looking to see an impeccable classical performance, this ballet won’t deliver. 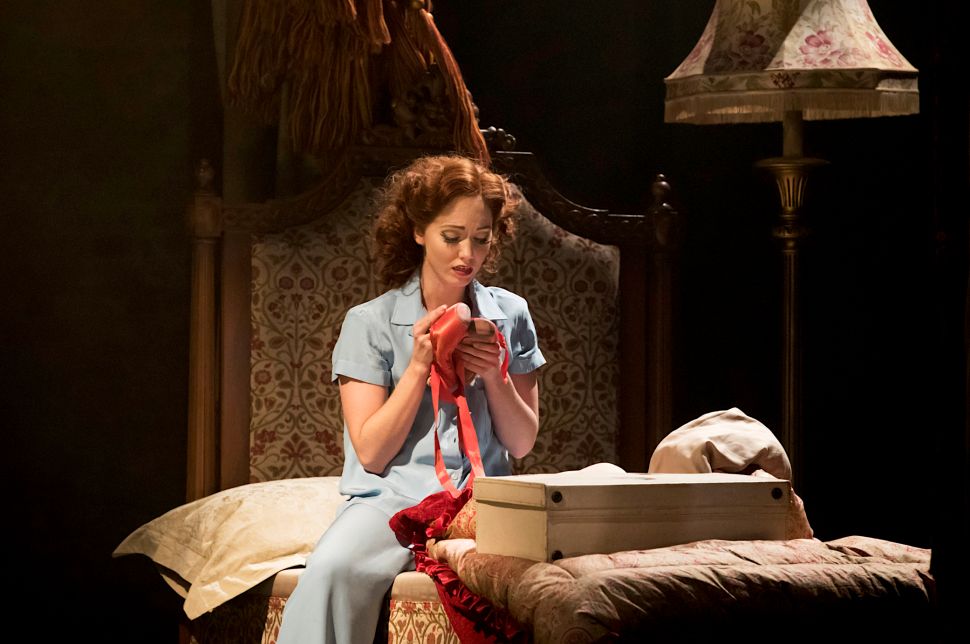