An ongoing puzzlement—right up there with where the hell the G train disappears to on weekends—is why, of Puccini’s mature works, the blatant, noisy and violently antifeminist Turandot should get so much play in opera houses, whereas the thrilling and heartfelt La Fanciulla del West has been generally ignored for more than a century.

There may be reason to hope that period of neglect is drawing to a close, though, since Tuesday’s night’s revival of this opera at the Rose Theater won a roaring, stamping ovation, even though the New York City Opera’s performance of the piece was not much better than okay.

To be sure, Puccini took a risk with the subject matter for this opera: the “West” of the title is California during the Gold Rush era, and the central love story is between Minnie, the owner of a saloon, and Johnson, a Sacramento dude who turns out to be the notorious bandit Ramerrez. So determined is Minnie to set her lover on the path of righteousness that she ends up challenging the lecherous Sheriff Rance to a game of draw poker, with her virtue staked against Johnson’s life.

What elevates this melodramatic material is primarily Puccini’s music, which employs shimmering whole-tone harmonies to evoke the wide-open spaces and infinite possibilities of the American frontier. But there is also a fascinating dramatic motif at work: in this alien land, the miners who frequent Minnie’s bar weep with homesickness.

The happy ending of this work is bittersweet, and therefore even more heartbreaking than the straightforwardly tragic finales of La Bohème or Madama Butterfly. Nobody dies in a literal sense, and yet the beginning of a new life necessarily means the end of an old one. The miners, numb with grief at the loss of their beloved Minnie, are reduced to sobbing “mai più… mai più!” (nevermore!).

Even if NYCO bit off a bit more than they could chew with this show, they are to be lauded for their audacity. The lengthy chorus parts and the many supporting roles were taken with vigor and thrilling attack. The orchestra made mighty noises by the skin of their teeth under the blunt direction of James Meena, which compensated in large part for a bare-bones staging by Ivan Stefanutti.

The two leads, Kristin Sampson as Minnie and Jonathan Burton as Johnson, boasted big, muscular voices with top B’s and C’s many a Met A-lister would kill for. As protagonists of a drama concerned with such important themes as love and redemption, though, they were disappointingly smaller than life. (And it didn’t help they were styled so dreadfully, denim culottes for her and dun-colored pleather chaps for him.)

Similarly, baritone Kevin Short ranted excitingly as Rance, but it was hard to take seriously all his swanning around in a fur coat from the Cruella de Vil collection.

However, in the most prominent of the opera’s cameos, baritone Alexander Birch Elliott was quite simply perfect as Sonora, inhabiting his duster and cowboy boots with the testosterone-fueled ease of a young Sam Elliott. His molten baritone vaulted through the climactic phrase of the entire opera, “Le tue parole sono di Dio” (Minnie, your words are from God), convincing the lynch mob to pardon Johnson for Minnie’s sake. Don’t ask me what happened after that, because I was blinded with tears.

What NYCO puts on stage is by no means an ideal Fanciulla, but it does leave you reflecting on joy and regret on the subway ride home. Any opera that does that is more than worth seeing. 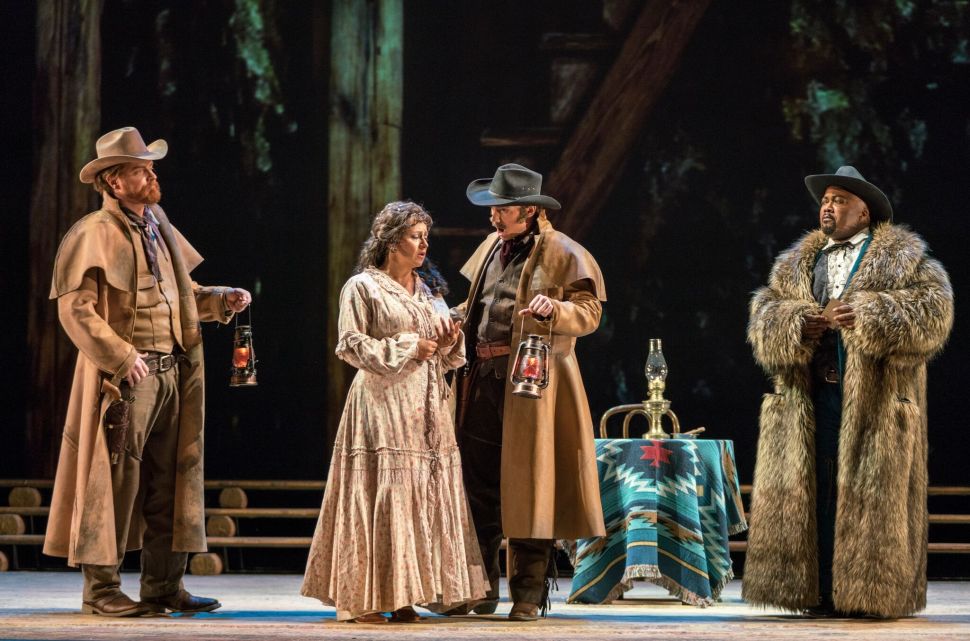