The championship tennis match between Billie Jean King and Bobby Riggs in 1973 was not called the battle of the sexes for nothing. She was a skillful, reserved 28-year-old pro tennis champion and crusader for women’s rights. He was a loud-mouthed 55-year-old past-his-prime champ and obnoxious male chauvinist pig. She won, and came out as a lesbian at the same time. He lost, and found himself force-fed a gigantic portion of bitter-tasting crow that trashed what was left of his career. It’s a big story, on the court and behind the scenes, and Battle of the Sexes reduces the sauce to an exhilarating movie propelled by two mesmerizing star performances—Emma Stone and Steve Carell. The match, staged 44 years ago while an estimated 90 million people watched, was a corner stone in the fight for equality. The movie, as relevant now as the story was then, lacks the same spark as live tennis, but the two stars are equally dynamic and unforgettable as the original players. You won’t be bored.

Billie Jean—happily married (on the surface) to her handsome husband Larry King (Austin Stowell), who was one of the founders of World Team Tennis—begins her battle for human rights at the 1972 U.S. open singles championship with an outspoken plea for higher pay for women in sports. Bobby immediately countered with sarcastic remarks to the press that men were faster, more competitive, and more popular with sports fans than women. To complicate her position, Jack Kramer, head of the U.S. Lawn Tennis Association (a commanding Bill Pullman) remained steadfast in his dedication to the supremacy of men and the inferiority of women, and refused to pay equal prize money for both sexes. The gauntlet was thrown. In retaliation, she formed the first women’s tennis association to prove the distaff side of sports was equal to men in every way—and in some ways better. Riggs was happily married, too (on the surface), to a beautiful wife named Priscilla (Elisabeth Shue) who stood by him publicly but privately despised his deplorable conduct before the press and his insults to women. He was dedicated to  putting the “show” back in “chauvinism,” insisting women excelled in only two places—the kitchen and the bedroom. As the film heats up to the big championship showdown at the Houston Astrodome, he makes a fool of himself wearing funny costumes and posing naked with his racquet, while Billie Jean King begins an affair with a hairdresser on the Virginia Slims tour named Marilyn (Andrea Riseborough) that she fears will destroy her career if the sponsors find out. The film delves gingerly into her reluctance to come out of the closet as well as Bobby’s addiction to gambling. Despite her loyalty to Larry, her marriage sours when he unexpectedly joins her on tour and finds her sharing a double bed with Marilyn. In one of the film’s most revealing lines, both Larry and Marilyn concur: “We’re both sideshows. Her first love is tennis. If you get between her and the game, you’re gone.” Eventually they both are, although in a post-mortem frame we learn she remained friends with Larry and now she and her life partner are godmothers to his children with his second wife.

One caveat about Simon Beaufoy’s calibrated screenplay: it shows how King’s newfound sexuality became a distraction that damaged her game, and includes sex scenes for titillation, but omits that Marilyn outed the tennis star against her will in a nasty palimony suit that cost Billie Jean the income from her product endorsements with the World Tennis Association. No matter. Vigorously choreographed and suspensefully staged by co-directors Valerie Faris and Jonathan Dayton, the big match is breathlessly precision-timed and overwhelmingly exciting to watch, resulting in some of the best tennis ever captured on film. Emma Stone, with steel-rimmed glasses, no makeup and no eyeliner, really looks uncannily like King. She had doubles, coaches and trainers, of course, but you can see with your own eyes that she plays some serious tennis. Steve Carell is winning enough to make Riggs likable. Sexism in tennis still lurks in the shadows of every court, but I doubt if anyone could ever play John McEnroe with half as much charm. 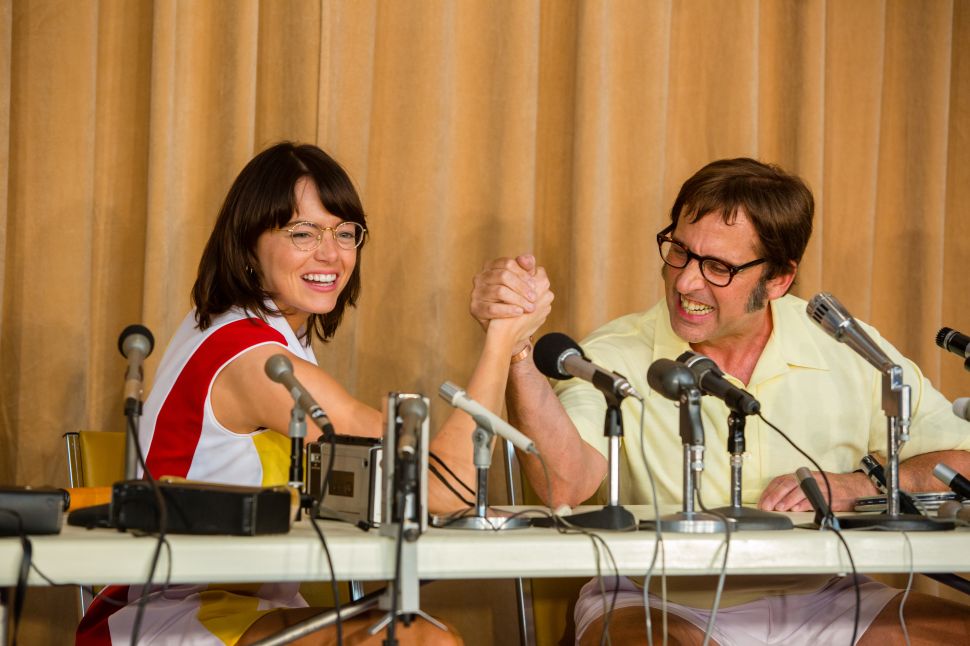