The Galaxy Note 8 looks awfully familiar. It’s a roughly 6-inch-long device with edge-to-edge display, but it fits perfectly in your pocket. The super AMOLED screen is incredibly vibrant, and it curves slightly on both sides. There is no fingerprint reader on the front (it has been annoyingly been moved to the back). If fact, you may easily mistake this phablet for the Galaxy S8+, which was released last April.

But this isn’t the S8+; it’s Samsung’s Galaxy Note 8. And you’ll notice some minor differences when you get closer to the device. First of all, it has a 6.3-inch screen that is slightly larger than the 6.2-inch screen of the S8+. Then, there’s the camera, which is a dual-lens camera instead of a single lens. This allows you to take pictures with 2 times the optical zoom. Samsung has also squared the corners on this device, making the Note 8 feel more like a writing pad.

The S Pen capabilities are what still differentiates the Note 8 from the Galaxy S8 line—as well as every other smartphone on the market. The S Pen not only makes it easy to sign documents, but it allows you to write directly on screenshots. And you don’t even have to turn the Note 8 on in order to jot down fast notes; the S Pen will write in white writing with the screen completely off. You can also use the S Pen to capture gifs and translate selected text into 71 different languages. It may sound like overkill, but the S Pen, originally thought to be a gimmick, is something that Galaxy Note lovers absolutely live by.

There are some internal differences, such as the RAM upgrade (6GB compared to 4GB) and the lower-powered battery (3,300 mAh compared to the S8+’s 3,500 mAh). Given the battery explosion problems that the Note 7 had, Samsung is playing it safe this time. While some think that the new Galaxy Note 8 is playing it too safe, it’s probably exactly what Samsung should do at this point.

There are a chorus of tech pundits who are saying that there is no way that Samsung’s new Note can compare or compete with the upcoming iPhone 8, which is due to be announced on September 12. But Samsung isn’t trying to compete with the iPhone 8; the Korean company is just trying to make the Note line relevant again. According to the first T-Mobile and Verizon users who started receiving their phones this week, it’s working

Reddit user Dragoon619 summarizes his feeling of the Note 8 after only a couple days of use:

All in all, my experience with the Note 8 has been nothing short of amazing. I had an amazing time with my phone and I’m sure the lucky owners who are getting this beast of a phone are going to enjoy it too.

The experience is a smooth as butter…. Crazy silky goodness…The screen is unbelievable. When you get yours, put it into entertainment mode then watch some stranger things[sic] on Netflix. The screen and the picture is like nothing I have seen on a smartphone.

Twitter has been filled with plenty of satisfied new Note 8 users.

Just got my Note 8. Absolutely love it. Already amazing.

@verizon @SamsungMobile I have just received my Note8 and she is a beauty 🙂 Thank you so much for shipping them out early!

Critics are on the same page with customers when it comes to the Galaxy Note 8. Though many complained that the Note 8 was boring when it was announced, perhaps some hands-on time changed opinions.*

TechRadar gives Samsung’s new device an enthusiastic four-and-a-half stars. “The Note 8 is Samsung’s big phone comeback story, making up for the Note 7 recall,” reviewer Matt Swider said, going on to praise the 6.4-inch display, the faster 6GB of RAM, and the excellent dual-lens camera. He says the battery life isn’t groundbreaking, but it isn’t at all a deal killer.

In a four-and-a-half-star review, CNET claims the Note 8 is the best Android smartphone one can buy right now. Like many reviews, CNET compared the Note 8 to expectations for the iPhone 8. But at this point it looks like Samsung’s Galaxy S9, which is likely to be released in January, will be the smartphone Samsung sets up to compete with the iPhone 8.

The Galaxy S9 is rumored to have an improved processor, 6GB of RAM, and will likely be the first Samsung phone to have a 4K screen for more advanced virtual reality features when used with Samsung’s Gear VR headset. Samsung is smart to wait for January, since that will be when the hype for the iPhone 8 starts to die down. In 2017, Samsung successfully leveraged the Galaxy S8 against the iPhone 7, even though Samsung didn’t release their competing phone until April.

Still, the Galaxy Note 8 is an all-around fantastic smartphone that will fulfill the needs of users everywhere. Its advanced Snapdragon processor and 6GB of RAM make it feel like a small computer that you can put in your pocket. If people are going to keep comparing it unfavorably to the iPhone 8, which hasn’t even been announced yet, then they should stop complaining and buy an iPhone 8 in a couple weeks. For now, Samsung might have played it safe, but they have a hit that will strengthen their brand in the long run. 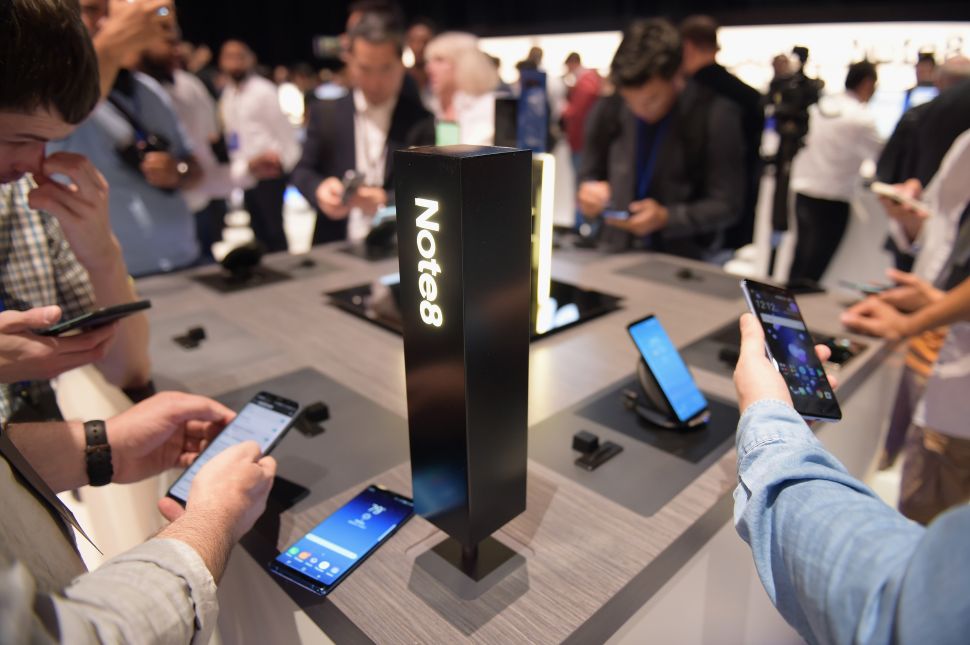