On Tuesday, September 5, President Vladimir Putin said something about President Donald Trump that undoubtedly sounded a little strange to American ears: “Trump is not my bride, and I am not his bride or groom.”

The comment came while Putin was speaking at a news conference in China, where he was attending the 2017 BRICS summit, when one journalist asked him if he was “disappointed” with Trump.

The question itself referred to the fact that, while Putin was wary of officially endorsing either Clinton or Trump in the 2016 election, he said that Clinton had “chosen to take up a very aggressive stance against [Russia]” whereas Trump “calls for cooperation,” though he emphasized that there was no way of predicting if either candidate would deliver on their promises once the election was over.

Following Trump’s victory, Putin expressed hope that Trump would help restore amicable relations between Russia and the United States, a hope that has been dashed in the time since. Relations between the two superpowers have deteriorated to a low point not witnessed since the heydey of the Cold War.

Last week, the U.S. ordered the closure of the Consulate General in San Francisco, a chancery annex in Washington, D.C., and a consular annex in New York City, a move that Russian foreign minister Sergei Lavrov denounced as a blatantly hostile act, though he defended Trump, indicating that he had been forced into the decision by U.S. officials.

On Friday, Lavrov indicated that the U.S. and Russia are not yet done throwing rocks at each other and then pointing fingers and saying, “He started it,” like petulant children.

“We will have a tough response to the things that come totally out of the blue to hurt us and are driven solely by the desire to spoil our relations with the United States,” Lavorv said.

In his news conference on Tuesday, Putin echoed the sentiment that the closure of the consulate in San Francisco was another attempt by U.S. officials to weaken Russia, though he promised to exercise caution when considering retaliatory measures.

“[The United States] has committed an obvious violation of property rights,” he said. “So, for starters, I would advise the Foreign Ministry to take the matter to court. We’ll see how efficient the much-praised American judiciary is.”

Putin then reminded everyone that there were still 155 American diplomats in Moscow that he could sack in retaliation to the recent cuts, but that he wasn’t planning on doing that—yet.

“We’ll see how the situation develops,” he stated, implying that the ball was in America’s court. “The fact that America has reduced our number of our diplomatic institutions is their right. But the fact that it was done in such a rude manner is another story. And it does not reflect well on our American partners.”

Like Lavrov, Putin refrained from blaming Trump directly for the deterioration of U.S.-Russian ties. When asked bluntly by one journalist about whether or not he was “disappointed” with Trump, Putin responded sardonically, as he often does today when pressed on their supposedly close relationship.

“Regarding frustration and non-frustration, your question sounds very naive,” he told the journalist, smiling. “He is not my bride and I am not his bride or groom.” By this, he means that it is not his place to be happy or unhappy with Trump, because they do not have any kind of personal relationship. Neither is it his responsibility to work out their differences, or to complain about broken promises, as one would do with a romantic partner.

“We are engaged in government activities, and in that each country harbors its own interests. Trump’s actions reflect the interests of his country; my actions reflect the interests of mine. I very much hope that, as President Trump himself once said, our countries can find some compromises in regards to international and bilateral problems, in a way that suits both America and the U.S. and other countries, bearing in mind our unique responsibility to international security.”

Ever since rumors of Trump colluding with Russia became a fixture for the American public, Putin has frequently been asked about his personal relationship with Trump. He has repeatedly indicated that it is no more personal than his relationship with any other world leader.

His phrase today echoes a statement Putin made in July 2016, long before Trump was president, when asked by a German journalist whether he was a “friend or foe” to the West.

“Relations between governments are not built in the same way as they are between people. I’m not your friend, or your bride, or groom. I am the President of the Russian Federation, of 146 million people who have their own interests, and it is my job to protect those interests. I do not want to be confrontational; I am ready to compromise, on the basis, of course, of mutual respect and in accordance with international law.” 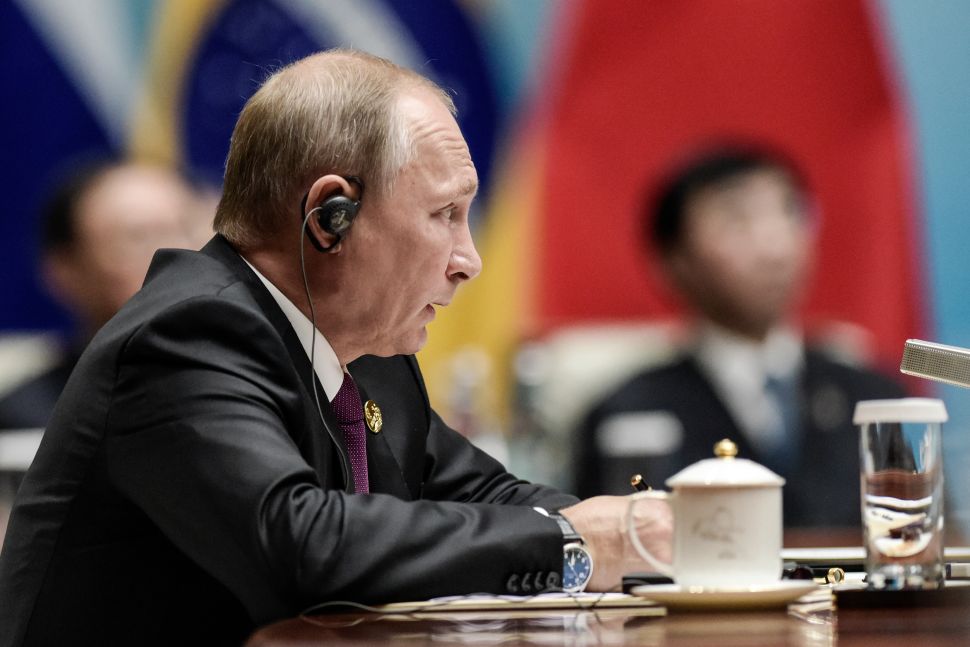