For Nicola L., our habitats—the surroundings in which we live our lives—are of the utmost importance. Since the 1960s, she has been creating what she termed “functional art,” making furniture-like objects that are at once silly, critical and utilitarian. Consider White Foot Sofa (1969), a work that is, well, a white sofa shaped like a foot. Or her numerous La Femme Commode (1969–2014) pieces, lacquered wood cabinets in the shape of women in which their eyes, mouths, breasts, and bellies become drawers.

Now, the 80-year-old, New York–based artist is having her first institutional survey at Long Island City’s SculptureCenter, on view through December 18. The exhibition presents works spanning her 50-year career—which came to encompass sculpture, performance, collage, painting, and film—and explores how design influences our experiences and can shape the way we relate to others.

“She was really one of the first female interdisciplinary artists to question the line between art and design,” SculptureCenter curator Ruba Katrib told Observer. “So much of her work is meant to be not only interactive but functional,” able to assimilate into a home and become a part of daily life. In fact, according to Katrib, when they opened the drawers of a Commode, which had been in the artist’s home, it was filled with papers. “She had clearly been using it for storage, but it also operated as a piece of art. Nicola is always quick to point out that these things are ultimately art objects.”

Born in Morocco, Nicola L. spent the early years of her career working between Ibiza and Paris, where she encountered other artists like Marta Minujin, Yves Klein, and Alberto Greco during the 1960s. These artist shared an interest in Pop and performance, themes that came to define Nicola’s aesthetic. She moved to New York City in the late 1970s, where she took up residence in the Chelsea Hotel—where she’s lived ever since, along with much of her art. In a statement on the SculptureCenter exhibition, the artist refers to the show as a family reunion of her “enfants terribles.”

“A lot of the works in the show were in private collections, her own included,” said Katrib. “I think a lot of people have seen images of her work, but we wanted to bring these iconic art objects together with the other aspects of her practice to create a fuller picture of this pioneering artist.” Together, the 50-odd sculptures, paintings, collages, installations, films, installations, and ephemera in the exhibition reveal a life dedicated to understanding what it means to inhabit a body, whether that body is physical, architectural, or political.

For instance, the 1969 functional art piece, Little TV Woman: ‘I Am the Last Woman Object,’ is made out of vinyl and wood and built like the artist’s Commode works, but with a small TV for a stomach. On its screen, the words “I am the last woman object/ You can take my lips/ Touch my breasts/ Caress my stomach/ My sex/ But I repeat it/ it is the last time” blink slowly off an on while a female voice says the same in French. The artist effectively makes the female body into an interactive object while providing an incisive critique of objectifying women.

Likewise, her lamps and tables in the shapes of eyes, lips, and heads make the body into interior architecture pieces—something to be lived with rather than in. On a more communal level, her Penetrable works, loose vinyl or textile coverings intended to be worn by performers, with holes cut out for eyes and mouths, extend the skin of the body. Some of these Penetrables, such as her well known The Red Coat (1970) are multiples stitched together, immediately uniting up to a dozen unique people under one resilient “skin.”

Katrib notes that, in bringing together so much of Nicola’s work, she noticed the recurring motif of the snail. Indeed, there are acrylic snail shell lamps, a series of collages with human head figures poking out of paper shells with poems written atop them, and numerous sketches of perfectly symmetrical snail shells.

This idea of a protective casement, a hard surface for a tender body, seems like the crux of the artist’s longstanding interest in how good design can make or break our understanding of both our inner and outer worlds. There’s perhaps no better symbol of this than this tiny creature’s habitance, which it carries on its back, always at home no matter where it is. After all, the shell is a essentially a nautilus—nature’s most perfect design. 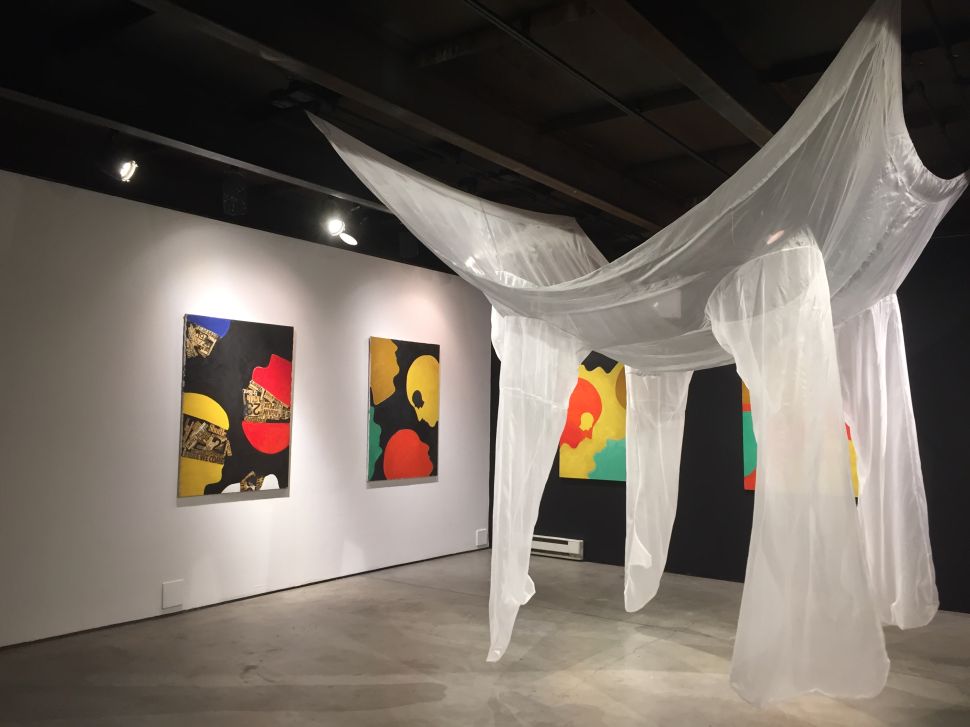