Actress Shay Mitchell has been obsessed with traveling for as long as she can remember. The Pretty Little Liars actress caught the travel bug at a very young age, well before there was Airbnb and whirlwind weekend trips that were heavily documented on Instagram and Snapchat. And that’s all thanks to her parents, who dragged her on quite a few trips as a kid.

That need to explore has stayed with her and now the minute she wraps up shooting on a series she is usually found running to catch a plane to her next exotic destination. Considering Pretty Little Liars just ended its seven season run and Mitchell is already working on a new Lifetime series, You, she will probably be traveling again, soon.

She’s even created a second career out of her far-flung trips, documenting her #shaycations in some of the most FOMO-inducing pictures and videos on social media. It also doesn’t hurt that Mitchell was pretty much born to be photographed, wearing an off-the-shoulder top while sipping wine in front of a stunning sunset backdrop. With over 17 million followers on Instagram a number of companies have taken notice, including American Express. This week Mitchell hosted the Taste of Travel with American Express event in New York City to celebrate launch of the Blue Delta SkyMiles credit card in between New York Fashion Week stints.

The card is targeting 20-something who are just beginning to explore the world. This young generation cites social media as a major influence for helping them choose where to travel, often counting influencers like Mitchell as sources of inspiration. Millennials are also traveling more in general; they are 23 percent more likely to take a trip abroad than their older counterparts. And they are going to spend more money when they do it; millennials are expected to spend $1.4 trillion on travel each year by 2020.

Experiences are the ultimate luxury for millennials and Mitchell is the perfect poster girl for them. Of course this means her vacations (and she says she would have to sit down with a pen and paper to count all the trips she has taken in the past decade) are now somewhat work-oriented, as she is expected to document and share all of her fun travel experiences. Mitchell admitted that she will take the same shot hundreds of times, to get it just right for the perfect post. But she does carve out time to go completely off the grid on her trips, especially at mealtime.

“I always want to try to have a balance and have portions of the day where I put my phone down and there is no social media-ing,” she said. That has proven to be pretty difficult, especially considering she’s visited Morocco (to attend the wedding of DJ Hannah Bronfman and Brendan Fallis), Thailand, the Caribbean, and Greece, all within a six month span. In between drop dead gorgeous photographs from those locales, Mitchell ate some of the best meals of her life in Mykonos—she certainly preferred the Greek cuisine to the grasshoppers she ate in Thailand. Her most luxurious recent trip of late was to the Philippines, where she filled her days with pampering spa appointments.

looking back at it 😜 #ShaycationSantorini

So how do you become a travel pro like Mitchell? Having a hit TV show helps, but the actress also fully immerses herself in the culture, as soon as she arrives somewhere. This is also a great way to beat jet lag, she noted.

“You have to get on the schedule right away. If you take a nap, you will be all off. I don’t get jet lagged at all,” she said. The actress who is dedicated to her workout regime tries to indulge when she is on vacation and relax a little on her daily fitness goals. She does bring a jump rope in her suitcase, but finds that walking around and exploring helps to burn off extra calories. And when it comes to planning your trip, Mitchell does believe research is key, but encourages being spontaneous and carving out some free time to experience something new. If anything, you’ll probably get a great photo out of it. 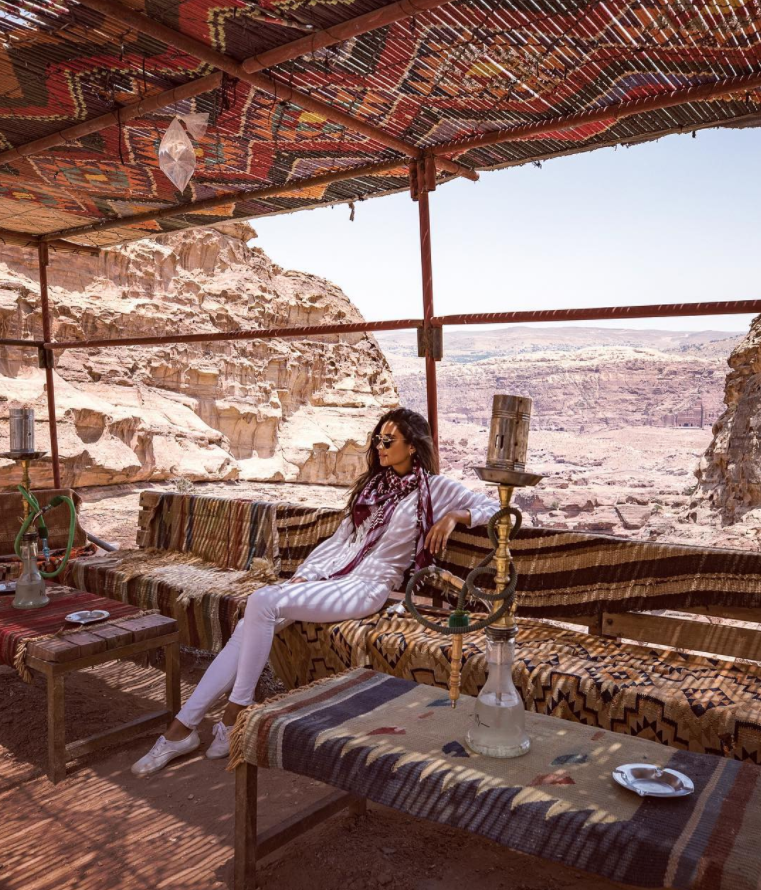