Steve Bannon wore a black suit jacket, a shiny black shirt and a big chip on his big shoulder. He spoke in his tough-guy way with Charlie Rose on 60 Minutes Sunday night about the Dreamers who hope to become Americans after growing up here and behaving like ideal citizens of the United States.

“As the work permits run out, they self-deport,’ Bannon said. “There’s no path to citizenship. No path to a green card. And no amnesty. Amnesty is not negotiable.”

Bannon’s appearance on CBS was his first television interview since he flamed out in August as the chief strategist in the White House for amateur President Donald Trump. After helping Trump fall to 33 percent approval in some polls, Bannon returned to Breitbart News to push reactionary propaganda to further assist Trump.

“Our purpose is to support Donald Trump,” he said of his website, which traffics in racism, bigotry and fear of foreigners—the sort of stuff that helped get Trump elected when Bannon ran his campaign.

Allegedly a Catholic, Bannon said he didn’t care if the Catholic bishops and cardinals opposed Trump for rescinding the Delayed Action / Childhood Arrival (DACA) program that affects vulnerable people, many of Mexican descent.

Trump said last week he will destroy that humanitarian policy set in place by President Barack Obama unless the Republican-infested Congress comes up with a new law in six months. Bannon says his church should stay out of it.

“The bishops have been terrible,” Bannon said. “They need illegal aliens to fill the churches . . . They have an economic interest in unlimited immigration, unlimited illegal immigration.”

And Bannon said he doesn’t worry about what foes in the media think of him because he doesn’t care “to be lectured by a bunch of limousine liberals.” He despises them, too.

Bannon—an anti-Semite and a nativist—has an interesting face for television. His eyes are blue and the top of his left cheek kept twitching as if he were clenching his jaw while Rose spoke. Bannon showed a slight whisker stubble on his considerable jowls.

He said if the DACA / Dreamers matter isn’t settled in the six months, “it will be a civil war within the Republican Party that will be every bit as vitriolic as 2013.”

And this is a man who knows vitriol. Speaking further of Republicans, he attacked the experts in the administration of President George W. Bush, sarcastically, as “geniuses” for their foreign policy mistakes still problematic today.

“I hold those people in contempt,” said Bannon, an expert in contempt. “Total and complete . . . They’re idiots . . . They got us in this situation and they question a good man like Donald Trump.”

He said he proudly defended Trump—he said he’s the only one who would!—after Trump praised people who marched and chanted alongside neo-Nazis and neo-Confederates at a white supremacist hate rally last month in Charlottesville, Va., that left one woman dead.

Bannon’s like that, the loyal type. He also bragged that he defended Trump even last fall, right before the election, when an audio tape surfaced in which Trump bragged about greeting strange women by grabbing them by the crotch.

Immediately after that, Bannon said he told Trump “You have a 100 percent probability of winning” over Hillary Clinton. And Bannon was right. Trump’s fearful and angry supporters, whipped up by Bannon, supported Trump through that scandal and still support him no matter what he says or does to embarrass himself or his nation. They share the same scapegoats: Mexicans, Muslims and the media.

(A digression here. As someone who covered sports for 35 years, I never—not once—heard any man in any locker room ever discuss women the way Trump did. And as someone who has been a member of a dozen health clubs, I’ve never heard men talk like that in those locker rooms either).

Bannon said New Jersey’s Governor Chris Christie, a prominent Trump fluffer during the campaign, lost his chance to be in the cabinet because he didn’t respond with support after Trump’s crotch-grabbing braggadocio.

As for the investigation of Russian espionage to distort the U.S. election—and its possible confluence with the Trump campaign—Bannon said “There’s nothing to the Russia investigation. It’s a waste of time . . . It’s a total and complete farce.”

Reports on the weekend—still not confirmed—said Eric Bolling’s son died due to suicide in Colorado on Friday after his father was fired by Fox News Channel following yet another sexual harassment scandal at that network . . .

Most of the regular Sunday shows were truncated or canceled by coverage of Hurricane Irma. One that made air was State of the Union on CNN. Host Jake Tapper interviewed Arizona Republican Senator John McCain, who is suffering from brain cancer but looking only a little thin and pale after chemo and radiation treatment.

Tapper told McCain he hoped this wasn’t their last interview and ask him how he wants to be remembered. “He served his country,” said McCain, a former Navy flier who served time in a prison camp during the Vietnam war . . . 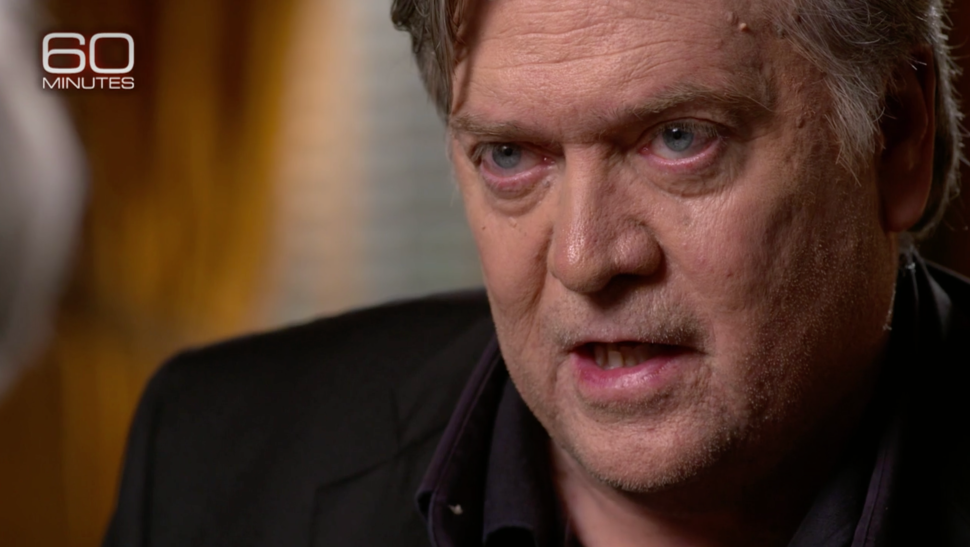