The Taliban claimed on Wednesday it had intentionally zeroed in on U.S. Secretary of Defense Jim Mattis’s plane when the insurgents pelted Kabul International Airport with rockets, killing one woman in the process.

Eleven other civilians were wounded in the brazen attack, which was ultimately repelled by members of Afghanistan’s special forces, leaving four Taliban fighters dead in the ensuing gun battle.

The Afghan trip was the first for Mattis, a former Marine general, since President Donald Trump recently announced a new strategy in the 16-year-old conflict, which includes sending more than 3,000 American troops to the rugged Central Asian nation and efforts to end cross-border havens for terrorists in Pakistan.

Along with the Taliban, ISIS issued a competing statement on Wednesday, also asserting responsibility for the bombing. But the U.S. defense secretary remained steadfast in the face of the attack, reiterating during public comments America’s commitment to the war.

“We are not quitting this fight,” Mattis said from Kabul, according to news reports. “In short, uncertainty has been replaced by certainty.”

He continued, saying the U.S. wouldn’t “abandon Afghanistan” and would not let it again become a “safe haven for terrorists,” according to CBS News.

The Taliban has historically fired grenades and rockets in the past on Kabul’s airport, which at times has struggled to remain secure.

Wednesday’s attack coincided with the anniversary of the radical Islamist group’s capture of Kabul in 1996. For its part, the Islamic State often asserts links to attacks without offering any clear evidence.

In any case, the latest airport strikes were unprecedented in their scope, lasting more than six hours.

A call placed by the Observer to the Department of Defense seeking comment on how close in proximity the secretary’s plane was in relation to the shelling was not immediately returned on Wednesday.

Mattis’s comments were backed up by NATO Secretary-General Jens Stoltenberg, who was also in the country for a series of meetings alongside Mattis and Afghan President Ashraf Ghani. Stoltenberg said the “attack on the airport is a sign of weakness, not the sign of strength,” according to the Associated Press.

“We know the cost of staying in Afghanistan, but the cost of leaving would be higher,” Stoltenberg later emphasized. “If NATO forces leave too soon, there is a risk Afghanistan may return to a state of chaos and once again become a safe haven for international terrorism.”

Defense secretary visits to Afghanistan are tightly managed and planned well in advance, but not disclosed until after arrival.

Interviewed by The Washington Post, Ahmad Saeedi, now a political analyst who previously served as an Afghan diplomat, said only a few top people knew about the visit by Mattis and Stoltenberg—suggesting that the rocket attack was a serious security breach.

“It is a big question as to how the Taliban or Daesh came to know about the trip?” Saeedi told the Post, using the Arabic name to describe the insurgent group. “This creates a worry that the enemy has found a place even in our artery.”

Mattis typically travels abroad in a blue-and-white plane known as the E4B, which is marked clearly with “United States of America” on the sides. But when visiting conflict zones, he and his team will usually switch to a lower-profile gray military jet.

Although Mattis’s trip was not publicized, according to two Taliban commanders who spoke with NBC News on condition of anonymity, “insiders” in the Afghan security apparatus gave advance notice of the inbound secretary’s plane.

“We fired six rockets and planned to hit the plane of U.S. secretary of defense and other U.S. and NATO military officials,” one of the commanders said, according to the news report. “We were told by our insiders that some losses were caused to their installations but we are not sure about James Mattis.”

Taliban spokesman Zabihullah Mujahid further confirmed the claim of responsibility by the Taliban, reiterating their target was the defense secretary and other U.S. officials. 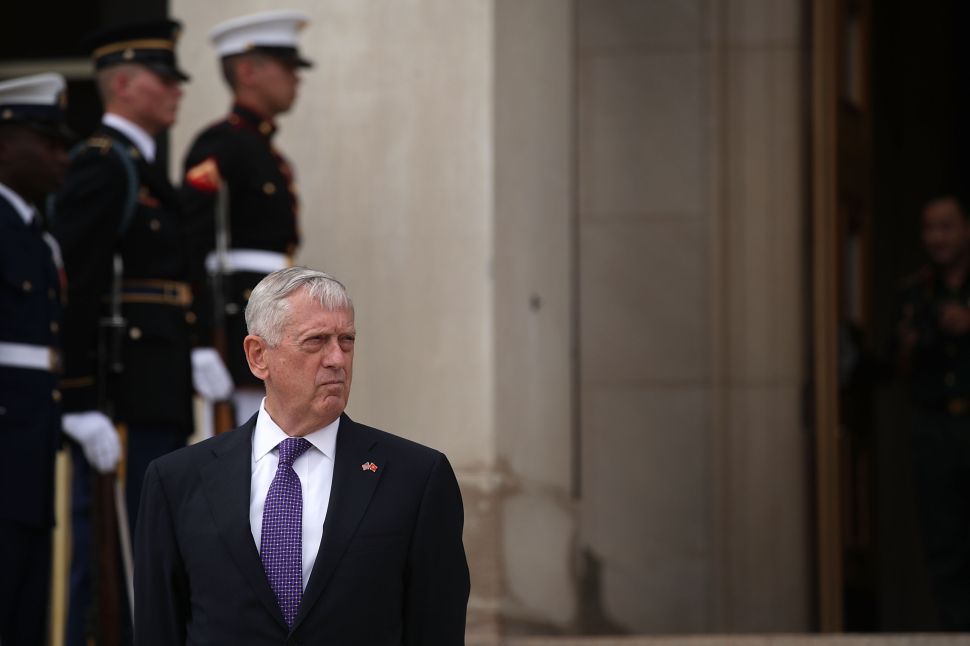