While Hollywood turns out escapist junk and bloated-budget cartoons, serious filmgoers in search of originality are turning to modest independent films with big ideas more than ever before. Fresh from the festival circuit where it has been ratcheting up attention and awards, The Good Catholic is a sober, thoughtful and well-made little gem about a young priest torn between his dedication to God and his sudden physical and emotional attraction to an unconventional woman who forces him to question his faith and his purpose. It’s a small film in every way, but I found it riveting.

Filmed in the unlikely setting of Bloomington, Indiana, The Good Catholic is based on writer-director Paul Shoulberg’s personal experience. His father was a priest who met, fell in love with, and married his mother when she was a nun. Nothing that melodramatic happens on the screen, but the film does center on a similar spiritual crisis when the good Catholic priest in the title begins to question the religious dogma that encourages devotion to the scriptures but not the flesh, and ask why a priest can’t do both. Father Daniel (played by a charismatic, engaging and totally natural newcomer, Zachary Spicer) is a handsome, practical and devout priest who joined the church as a tribute to his late father without fully acknowledging his own personal vulnerability to worldly problems and desires. He lives in the parish rectory, positioned between opposing proponents of faith represented by two other men of the cloth—another unconventional priest, Father Ollie (John C. McGinley), and the older, wiser Father Victor (Danny Glover), who acts as an advice counselor to them both. On one side, Father Ollie is a basketball addict who leads the choir in  a rock and roll version of “Amazing Grace,” craves cigarettes and refined sugar, cusses like a stevedore, and wears tennis sneakers under his robes during the Doxology. On the other side, Father Victor, an old friend of his father’s who has vowed to guide and protect Daniel in the discipline of the  priesthood, addresses every parishioner’s problem with a convenient passage from the Old Testament and ten Hail Marys.

For Father Daniel, it’s not so simple. He jogs. He works out. He attends funerals, christens babies and listens to  confessions. But his already soft attitude toward traditions and tolerance for modern trends really begin to melt when a woman named Jane begins to unload her problems during his late Friday night shifts listening to the confessions of parishioners who can’t get to church during regular daytime hours. Jane (Wrenn Schmidt) is a musician with her own ideas about religion, responsibility, and common sense. Already confused about his own faith and  purpose, questioning the sincerity of his vows and deeply disturbed that no matter how much he tries he cannot see any tangible proof that there is a God, Daniel reluctantly surrenders when Jane challenges him to  trade places with her  in the confessional so he can unburden his own problems for a change. You can see where this is heading. They laugh it off as a “star-crossed, platonic, G-rated tragicomedy” kind of friendship, but as their mutual attraction grows, director Shoulberg eschews all attempts at sensationalism in favor of a more balanced investigation of the age-old question: Is a priest a deity set apart from his flock, or just an ordinary man like other men? It’s a wrenching question most Catholics are reluctant to ask, much less answer.  The Good Catholic tackles it head on, presenting the priesthood as a complex way of life in a state of constant evolution for which there are no facile solutions. Much of what keeps the material sensitive and secular, yet above and beyond the interest of a restricted faith-based Christian audience, is the fragile yet universal appeal of Zachary Spicer, an actor whose limited work on television up to now has only hinted at a broader range deserving of bigger and better exposure in  feature films. He’s one to keep an eye on.

The Good Catholic resists all temptation to introduce sex into the equation, but despite the diverse opinions of the other priests who try to shepherd him in the right direction, it is clear in the end that when Daniel removes his collar and knocks on Jane’s door, he’s on the verge of a profound change himself. 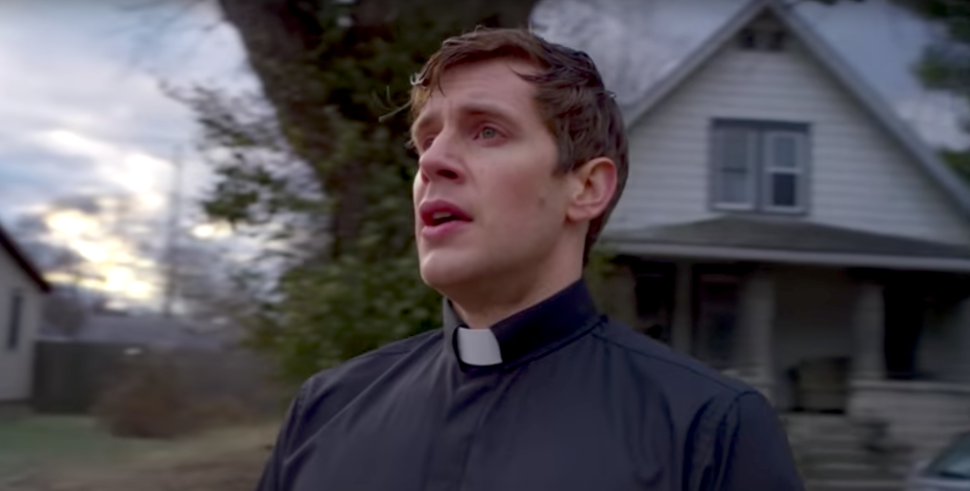