This weekend, fraternal twins Nikolai and Simon Haas bring their strange vision to Los Angeles in a sprawling exhibition—their first “solo” in the city.

The Haas brothers’ work is known for straddling the line between the worlds of art/design and craft. The exhibition, “Haas Angeles,” is effectively a survey of their multifarious output from the last six years and it brings together ceramic sculptures, 3D paintings and drawings, plus a film (the brothers’ first), a “Sex Room” and a selection of their strange creatures that look like costumes culled on a sci-fi set. It’s their largest show to date and it’s also kind of a homecoming for the duo, who have lived in the city for a decade now. They moved to L.A. together in 2007, reconvening in the city after Simon finished his studies at RISD and Nikolai toured the country in a band. They began collaborating almost immediately, founded the Haas Brothers studio in 2010.

“When we moved out to L.A., I think we both were inspired by the energy,” Simon told Observer in an interview. “It felt very Wild West….There’s a big industrial scene, and then there’s the film industry, so we have access to every kind of building material in L.A., which really got our creative juices going.”

Their weird creations, usually part-design and part-sculpture, look like organisms found on the bottom of the ocean, or perhaps ancillary Dr. Seuss characters—sometimes a combination thereof. In the UTA Artist Space show, for instance, a huge, hairy creature—which looks a bit like the child that might result from a gorilla mating with the ice monster from Empire Strikes Back—sits in the middle of the main gallery room. His name is King Dong. Oh, he also has a huge brass penis.

The brothers’ work often looks like a kid’s book of doodles turned into real life creations, which, as it turns out, isn’t that far off. Most of their works are indeed born as sketches. “Usually the sketch is about defining more of an overall concept, and we will start to work on the individual pieces and put them together,” said Nikolai. “Sometimes each individual piece has a sketch, and sometimes they’re just made in the spirit of the individual sketch.”

Their chosen media further emphasizes the childlike sense of imagination they bring to each project. Their materials are as varied as the forms and figures they create, and often as weird: from more traditional sculptural resources such as marble, ceramics, and brass, to stranger ingredients like buffalo fur and rare resins. And yet, for all their imaginative creations and technical acumen, they’re also not above a silly joke or simple sex pun, be it in the form of brass genitals or titles such as Tail-or Swift Butt, or Drew Hairy-more.

“Humor has kind of always been there,” says Simon. “A lot of the cartooning started when we were 21. It was on our 21st birthday. We were sitting around with our older brother competing to make drawings that would make each other laugh. We were making all these weird animals in compromising positions, and Nicki would consistently make us laugh non-stop. [Our older brother, Lucas] and I were furiously trying to make funnier drawings and we could not do it. But there was an expressive quality—he melded the cuteness of these animals with sexuality in such a way that you couldn’t help but laugh when looking at it.”

“Haas Angeles” also marks the one-year anniversary of the UTA Artist Space. Founded in September 2016, the 4,500 square-foot exhibition space is an arm of the entertainment firm United Talent Agency, which represents influential figures in film, art, music, and many other disciplines.

The opening reception for “Haas Angeles” will be held from 3 to 6 p.m. on Saturday, September 9, and will feature a pop-up screen-printing shop in which visitors can have their own clothes printed with Haas Brothers designs, for free. 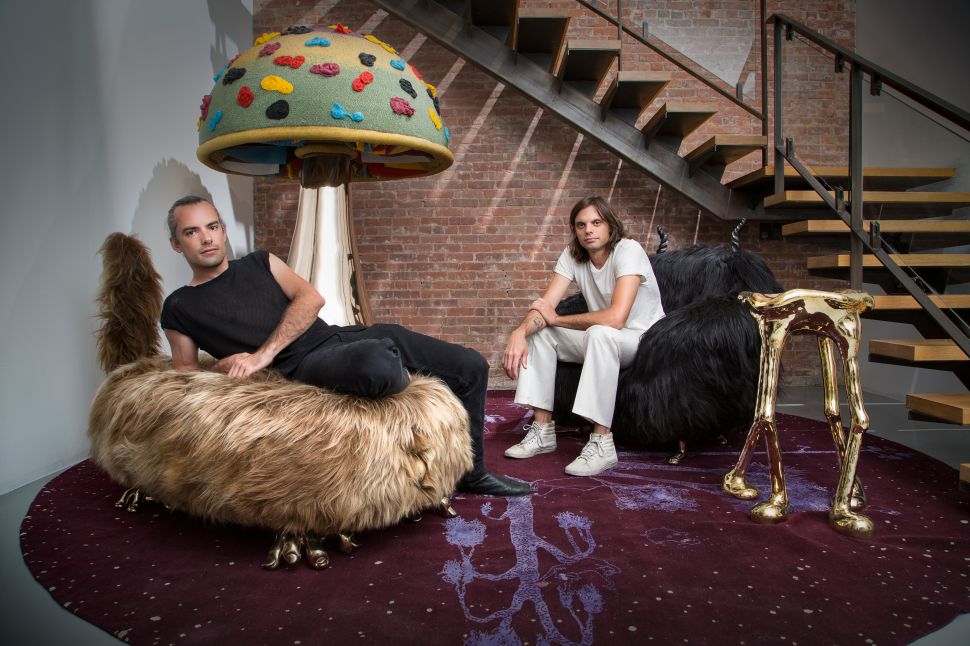