Secret service bosses are a notoriously tight-lipped bunch, particularly in Eastern Europe, where the Soviet legacy of complete state secrecy lingers. In the former Soviet Union, where the KGB ruled for most of the last century, spy chiefs give few interviews, and when they do they say very little of interest. Such is the nature of the espionage business there.

It was therefore something of a shock this weekend when Vasyl Hrytsak, Ukraine’s secret service chief, gave an interview jam-packed with bombshells about the nasty SpyWar between Kyiv and Moscow. That clandestine struggle is an appendage to the low-boil conflict being waged in Eastern Ukraine between Ukrainian forces and “rebels” who are in fact the Russian military.

Casualties are generally modest—a couple soldiers here, another handful there—yet they are constant. Shelling, sniping, and patrolling take a steady toll of Ukrainian defenders who are holding the line in the country’s east, keeping the Russian invader at bay, and the conflict shows no signs of abating anytime soon. Roughly one-third of the 10,100 dead in the Russo-Ukrainian War have fallen since the so-called Minsk II cease-fire was hashed out in February 2015.

The espionage portion of this conflict is seldom mentioned in the media, so Hrytsak’s comments were highly unusual. It should be noted that Hrytsak isn’t a political hack; he is a career intelligence officer who has worked for the Security Service of Ukraine or SBU since the early 1990s and has been its head since mid-2015.

In a TV interview, Hrytsak minced no words in calling out his Russian counterpart, Aleksandr Bortnikov, head of the Federal Security Service, the powerful FSB. Having previously explained three weeks ago that the SBU knew that the Kremlin had dispatched spy-saboteurs to undertake terrorist attacks inside Ukraine, Hrytsak now made a direct appeal to Bortnikov:

I appeal to you as an officer. There are rules even in war that should not be broken by secret service agents. You have transgressed all these rules.

Stating how destabilizing FSB terror on Ukraine would be, Hrytsak went on:

Do you realize what geopolitical consequences these actions may have? Do you realize that you will be forced to answer for your actions? It is in your power to stop it. So, stop it now.

Then Hrytsak called out Bortnikov and the Kremlin for a series of terrorist attacks in Ukraine that were perpetrated by the FSB:

You and I both know Russian secret service agents were involved in terrorist acts committed in Odesa, Kharkiv, Kherson and other cities. Dozens of people died as a result. But this time you have broken all the rules and are prepared to destabilize the situation in Russia in order to justify invading Ukraine in a massive military campaign.

The attacks Hrytsak referenced—fires and clashes in Odesa in May 2014 that killed 48, a bombing in Kharkiv in February 2015 that killed four, and a car bombing in Kherson in April 2016 that killed one—are believed by the SBU to be Russian handiwork. Kyiv’s view is shared by Western security services. A senior American intelligence official with extensive experience in Eastern Europe told me there was “absolutely no doubt” that the FSB stood behind those terrorist attacks inside Ukraine.

Unfortunately, Moscow sending terrorists to Ukraine to foment a broader crisis—and perhaps a fully renewed war—therefore cannot be ruled out as a malevolent fantasy. Dispatching assassins abroad to create mayhem and settle scores with Vladimir Putin’s enemies—even in Washington, D.C.—is something this Kremlin does with disturbing frequency.

However, Hrytsak wasn’t content to stop there. He accused Bortnikov of crossing the “red line” by plotting something truly nefarious to justify renewed aggression against Ukraine. That red line, the SBU chief explained, was even more sinister:

You were ready to blow up your own Russian citizens in order to destabilize the situation in Russia and give grounds for invading Ukraine, to launch a full-scale campaign.

In other words, Kyiv has officially accused Moscow of planning false-flag terrorism against its own people to justify a wider war against Russia’s neighbor. This sounds like a bad conspiracy theory, not helped by the appropriation of “false flag”—a perfectly normal and legitimate espionage term—by tinfoil-wearing charlatans hawking male enhancement products.

Yet false flags exist in real life, and nobody is more proficient in this dark art than the Russians. This sort of dangerous provocation—what the Russians call provokatsiya—is ubiquitous in Kremlin spy operations, and they’ve been employing them since the Imperial era more than a century ago. Indeed, anarchist terrorists in the last decades of the Tsar’s rule—especially the most deadly and accomplished ones—had a bad habit of turning out to be agents provocateurs for the Tsar’s secret police.

Things got even worse under the Bolsheviks, who eagerly employed provocations against their enemies at home and abroad. The KGB became very accomplished at employing false-flag operations, including terrorism, to undermine Moscow’s enemies. In a recent column, I unraveled one such operation in Cold War Germany, a Communist false-flag murder that had enormous political consequences—all of them negative for the West.

These unpleasant practices continued after Communism’s fall and the KGB’s successors have employed false-flags in what they call “operational games.” One of them seems to have played a pivotal role in the coming of Vladimir Putin to power in the Kremlin. That notorious example was the bombing of four Russian apartment buildings in September 1999 that together killed almost 300 civilians and injured more than a thousand.

These terrorist attacks infuriated average Russians and gave the Kremlin a green light to renew its messy war against Chechen rebels, since the bombings were perpetrated by terrorists from Chechnya, according to Moscow. Of particular note, these attacks bolstered the profile and power of the country’s newly appointed prime minister, Vladimir Putin, who had headed the FSB until only a few months before the bombings.

There was never convincing evidence that Chechens were behind these outrages, but there was considerable evidence that the FSB was. The best book on this sordid saga leaves little doubt that FSB officials blew up their own citizens to justify a new Chechen war and boost Putin. Several journalists who looked into the matter wound up dead under violent or mysterious circumstances.

The only question here is whether those Chekist false-flag bombers were acting on orders from the Kremlin or they went rogue—which may not be answerable anytime soon, although I can confirm that our Intelligence Community knows much more about this ugly mystery than it has ever admitted publicly.

The notion that the FSB might commit acts of terrorism against Russians to justify war and aggression isn’t only plausible, it’s likely already happened under Putin. The SBU chief’s comments therefore deserve to be taken seriously, particularly in light of the imminent Zapad 2017 military mega-exercises, the biggest display of the Kremlin’s military might since the Cold War, right on the doorstep of NATO—and Ukraine.

Poland’s defense minister, Antoni Macierewicz, recently called out Moscow for Zapad, terming it “not at all defensive, but aggressive and that’s dangerous,” adding that, “according to information that has been reaching us, nearly 100,000 soldiers have been mobilized for these exercises”—not the mere 12,500 that Moscow has claimed.

Warsaw has every right to be worried, given Putin’s track record of aggression and Moscow’s long history of invading Poland. However, the Poles are NATO members and can rely on collective Western security. Ukraine stands alone against Russia, so Kyiv has every right to be even more worried about what the Kremlin might do next. 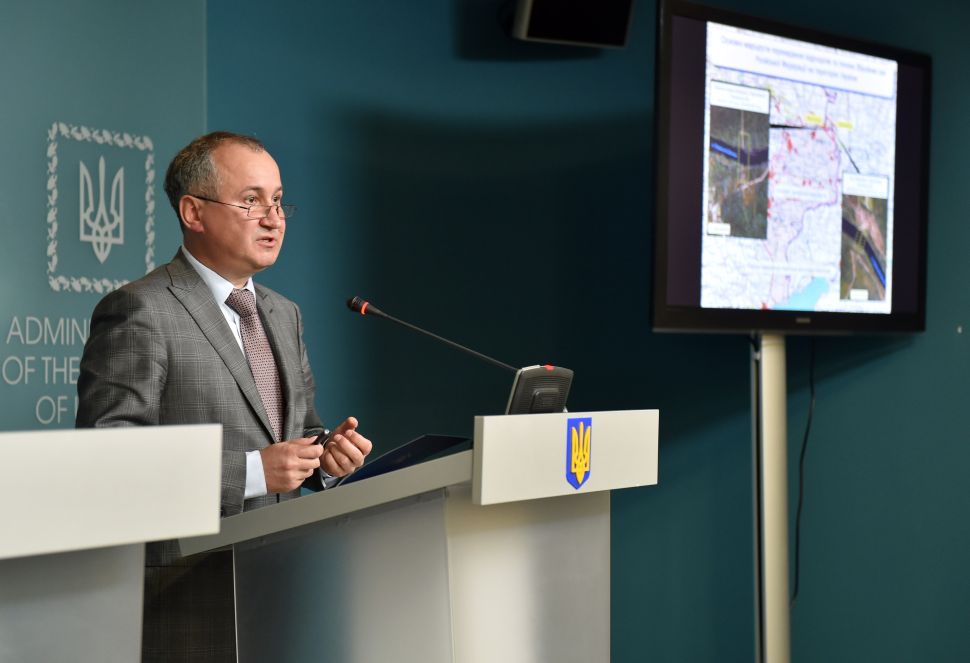