Our nuclear stand-off with North Korea shows no signs of abating. On the contrary, every day or two, it seems to get worse—with no end, or off-ramps in sight. President Donald Trump says or tweets something aggressive and shocking just to taunt Pyongyang, to which North Korea responds in juvenile kind.

This bizarre spectacle, based on public trash-talk between nuclear powers, has become so commonplace that it seems almost normal. It is nothing of the kind. It’s not normal for our president to openly state that he will “totally destroy” North Korea—implying the nuclear annihilation of 25 million people—as he did before the United Nations last week.

Neither was it normal for Ri Yong Ho, Pyongyang’s top diplomat, to state that Trump’s bellicose rhetoric amounted to a “declaration of war” on his country, as he did at the beginning of this week, adding that North Korea reserves the right to shoot down American aircraft, even in international airspace.

Of course, such threats have something to do with the fact that our president amplified his UN saber-rattling with a tweet over the weekend in which he threatened Pyongyang’s leader, Kim Jong Un—whom he regularly refers to as “Rocket Man”—and his entourage with death: “They won’t be around much longer.”

Pyongyang’s threats ought to be taken more seriously than Trump does. This, after all, is an intensely nationalist regime, little understood by outsiders, grounded in hatred, fear, and loathing of “imperialists”—especially the United States—and Donald J. Trump seems bent on proving 70 years of North Korean propaganda correct about what dangerous, irresponsible people American war-mongering capitalists are.

The Kim dynasty has a well-honed habit of doing things no other country on earth would dare do. Back in 2010, one of their submarines sank a South Korean warship, blowing it in half with a torpedo and killing 46 sailors. The idea that Pyongyang might shoot down U.S. warplanes is entirely plausible. Indeed, they’ve done it before, in April 1969, when a North Korean MiG-21 blasted an unarmed U.S. Navy EC-121 spy plane out of the sky, without warning, 90 miles off the North Korean coast, killing 31 Americans in the deadliest attack on one of our spy planes in the whole Cold War.

That incident, of course, came little more than a year after North Korea seized the USS Pueblo, a navy spy ship, on the open seas, killing one sailor and taking the rest of the crew hostage. Pyongyang held the 82 Americans for almost a year in unpleasant conditions before releasing them, but North Korea has never returned the Pueblo, which remains as a war trophy at the Victorious Fatherland Liberation War Museum in the North Korean capital.

Needless to add, under the current crisis conditions, any such North Korean aggression would be met with force—and a far wider war would likely result within days. Officially, the Pentagon remains somewhat optimistic about the course of events in Northeast Asia, and this week Defense Secretary Jim Mattis explained that his goal remains “to solve this diplomatically.”

That’s a different take than what’s been offered by our commander-in-chief, and Mattis—a hard-bitten realist about war who’s widely considered the finest American general of his generation—is keeping a diplomatic door open to Pyongyang despite Trump’s slamming it shut. However, since American national security experts are having a tough time figuring out who’s calling the shots in Washington these days, don’t expect the North Koreans to guess right either.

A sobering note was recently added by retired Admiral Jim Stavridis, who explained that the threat of war on the Korean peninsula is rising rapidly. Stavridis assessed the likelihood of a conventional war with North Korea at between 20 and 30 percent, while a nuclear conflict was about a 10 percent chance—noting that this crisis is growing more dangerous. Stavridis is a smart, level-headed fellow who headed up two of the U.S. military’s regional combatant commands, including serving as the Supreme Allied Commander Europe, so his warning deserves to be taken seriously.

The unpleasant reality is that there are no “clean” military options on hand. Our Pacific Command has detailed war plans for North Korea, covering every contingency, and none of them can be executed without the serious risk of massive loss of life, most of it civilian. To say nothing of the chance of nuclear release. If Pyongyang is going down—and one thing that’s certain is that North Korea will ultimately lose any war that it starts—there’s every reason to expect the Kim dynasty to go out with mushroom clouds. There is no such thing as a “limited” nuclear exchange in the crowded space of Northeast Asia. Millions will die, and a far wider war is eminently possible.

So it’s imperative for Trump to cease his irresponsible, bellicose rhetoric. Such hazardous trash-talk has no place between nuclear powers, particularly when one of them has a proven track record of lashing out violently when it feels like it. Talking heads need to dial it back too and realize what any war on the Korean peninsula would mean.

Cheap talk is having an effect, however. In a new Economist/YouGov poll, almost half of 1,500 Americans surveyed “either strongly supported or somewhat supported the notion of the U.S. taking military action against North Korea in an effort to end that country’s nuclear program.” One wonders how many of those Americans understnad the military realities of what they’re asking for.

Egging your country into a stupid war of choice that turns into a disaster is nothing new. The First World War was the classic case. As I explained in my most recent book, both Austria-Hungary and Russia gambled—and ultimately lost—everything over the Balkans in the summer of 1914 for reasons that, today, cannot be described as anything but harebrained.

The height of folly, however, was Italy’s entering that war in the spring of 1915 in a greedy effort to appease nationalists by stealing land from ailing Austria-Hungary. Jingoists promised a quick, victorious war yet nothing of the sort happened. Instead, Rome’s offensives on the Isonzo river—today the border between Italy and Slovenia—which the high command believed would defeat the Habsburg Empire in a matter of weeks, devolved into an attritional slugfest that lasted years. Eleven offensives launched on the Isonzo gained Italy a few miles of rocks, achieving nothing of strategic consequence at the cost of a million lives, most of them Italian.

Amazingly, this unprecedented horror failed to shock some sense into Italy’s warmongers. One of the biggest boosters was Gabriele D’Annunzio, a prominent writer and intellectual. Drunk on romantic nationalism, D’Annunzio wanted war with Austria-Hungary to breathe life into Italy and show that Rome meant business. He fiercely advocated Italy’s disastrous entry into the First World War, greeted its coming with glee, and feted every Italian offensive, no matter how disastrous.

In fairness to D’Annunzio, who was 52 years old in 1915, he headed for the front himself. He wasn’t a present-day American warmonger, breathing fire from safety of the Fox News studio. D’Annunzio participated in trench raids and flew warplanes deep over Austria, even staging a dramatic air raid on Vienna. He courted death and reveled in it, writing of his frontline exploits, “I am a poet of slaughter.”

He cared not a whit that the Isonzo campaign was a catastrophe. He found glory even in that appalling waste of life. A hundred years ago, in the summer of 1917, morale in the Italian army was at a breaking point. After the tenth offensive on the Isonzo failed in June, at the cost of 160,000 Italian troops (36,000 of them killed), the high command decided to shoot alleged shirkers pour encourager les autres.

D’Annunzio watched as 28 soldiers of the Catanzaro Brigade, which had retreated under fire on the Isonzo, were lined up and executed for cowardice. Seeing their dead bodies lying face-down, he commemorated what he witnessed in a gruesome poem he titled Cantano i morti con la terra in bocca (The Dead Sing with Dirt in Their Mouths). Nothing could deter D’Annunzio from his fanatic belief in nationalism and the innate glory of war.

America doesn’t need any D’Annunzios right now. The stakes in our crisis with North Korea are far higher than on the Isonzo a century ago. Any nuclear exchange there will kill millions. Donald Trump personally avoided war in Asia in his youth, discovering he had bone spurs. He should avoid war in Asia now as well too—for the good of our country and humanity. 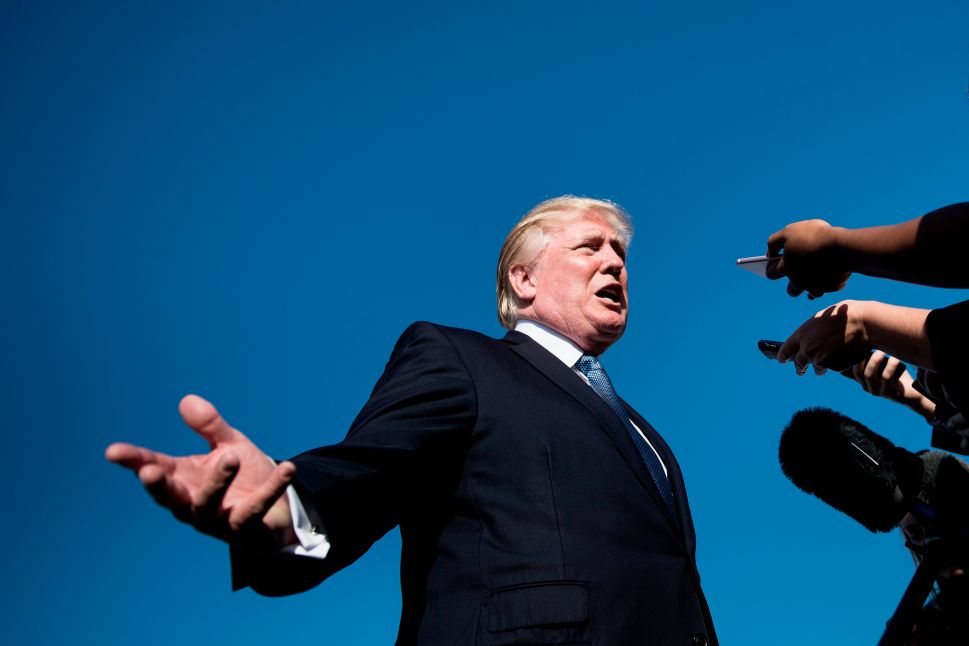