Roughly 2,000 people attended a public memorial for Whelan at Atlantic City’s Boardwalk Hall. Whelan, who spent nearly four decades in public life as a city councilman, mayor, assemblyman and senator, died last month of a heart attack. He was 68.

To Senate President Steve Sweeney, Whelan was a confidant who could be counted on during political battles in Trenton. Former Atlantic City Council President Roz Norrell-Nance recalled how Whelan, a former teacher, went from political rival to close ally once they found common ground on caring for the city’s children. Mayor Don Guardian said beach patrol officials stopped counting after Whelan saved 1,000 lives during his 19 years as a lifeguard.

“The Whale stood tall in Atlantic City, and it had nothing to do with his physical height, but the content of his character,” Guardian said, using a nickname for Whelan. “He made decisions that were right for the city that he loved.”

Whelan was first elected councilman in 1981. He became the city’s mayor in 1990 and served until 2001, overseeing the resort during its heyday as an East Coast gambling mecca. He joined the state Legislature as an assemblyman in 2006 and became a state senator in 2008.

The first speaker was former Pennsylvania Gov. Ed Rendell, who recounted a charity basketball game between politicians of his state and New Jersey. When a Democrat went down with an injury, Rendell turned to the towering Whelan sitting in the audience, assuming he’d be good at the game. Whelan said he wasn’t, but he played anyway.

“Jim always told the truth. He was no good,” Rendell said to a roaring crowd. “But the one thing he did. And if you knew Jim it would’t surprise you. He dove — and the court was concrete — he dove for every loose ball. He hustled. He gave 100 percent effort all the time, even for a pickup game.”

State Sen. Ray Lesniak (D-Union) sat beside Whelan in the Senate for eight years. The two had a routine where Whelan would reach over to Lesniak’s desk with his long arms and push the voting button. It was something they did “over a thousand times,” Lesniak said. He called Whelan “the most genuine person I’ve ever met in my entire life.”

Sweeney (D-Gloucester) and Lesniak plan to introduce a bill renaming Boardwalk Hall after Whelan. “He’s an example of what an elected official should be,” Sweeney said. “He was the best mayor Atlantic City had in a few decades.” 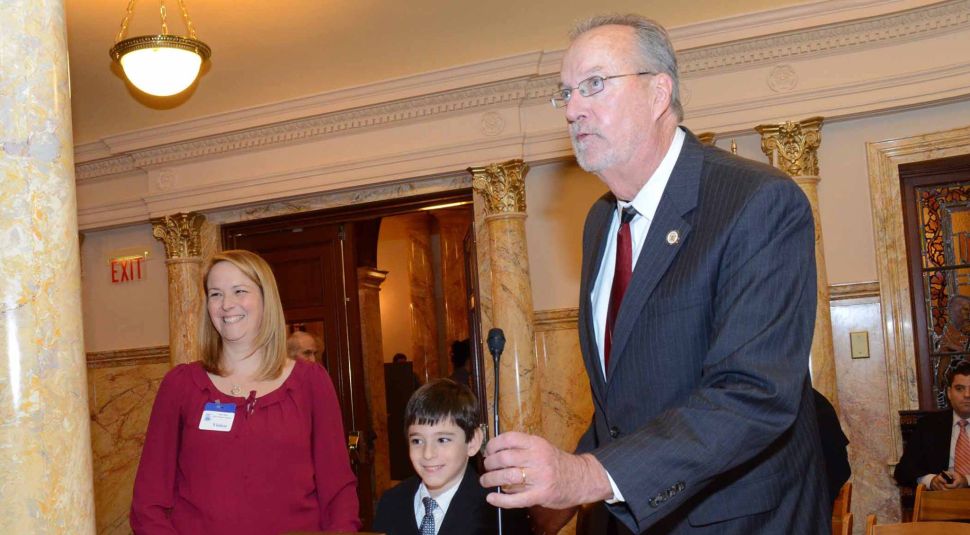