As an increasing number of galleries fold due to rising metropolitan rents, plus the toll of incessant art fairs and associated travel, gallerists are urgently seeking savvy ways to stymie the slow financial bleed of what’s been deemed the “middle market squeeze.” For many, that means finding ways to collaborate and share resources.

Perhaps the most notable innovation on this front has been the creation of Condo in 2016, a collaborative international exhibition launched in London, in which local spaces hosted work from other galleries from around the world for a month. Started by Vanessa Carlos, co-owner of the London-based gallery Carlos/Ishikawa, this past summer saw the first edition of Condo in New York, spearheaded by gallerists Nicole Russo of Chapter NY gallery and Simone Subal, who owns an eponymous gallery on the Lower East Side. The event boasted 20 international galleries showing their artists in 16 New York spaces between June and July.

Janine Foeller and Micky Schubert, however, are throwing their hats into the collaborative ring full-time. On September 22, they will open a new co-op venue in Brooklyn called GrandArmyCollective. Both Foeller and Schubert are well-versed in the perils of gallery ownership: Foeller ran New York’s Wallspace from 2003 to 2015 with co-founder Jane Hait, and Schubert shockingly shuttered her eponymous Berlin gallery this summer, after 11 years in business.

“I just didn’t make enough money,” Schubert told Observer. “But I still consider myself lucky, I didn’t have any debt when I closed. And that’s rare for a lot of galleries these days.”

Foeller seconded this statement, noting that she and Hait had wanted to keep Wallspace going. “But when our lease was up and we had to look for a new space, we were confronted with what the options were and they weren’t good. It was impossible to continue, despite the fact that we loved what we did and the artists we worked with.” That list included Walead Beshty, Mark Grotjahn, Michael E. Smith, and Johannes VanDerBeek.

Although gallery real estate is cheaper in Berlin than in New York, Schubert said the cash flow there is hindered by a lack of collectors, making it difficult to keep up a steady revenue stream throughout the year. “Berlin Art Week was a great idea [because] it brings so many collectors to the city. But day-to-day, it’s much more difficult to make a sale.” This can necessitate participation in more art fairs in order to get eyes on artists’ work, and that’s where costs start to add up fast. “No matter if my rent is less, I pay the same fair fees as anyone else, and it’s virtually impossible to keep up with them.”

Foeller and Schubert met at Art Basel in 2010 and struck up a friendship. But it wasn’t until this past March that they started thinking about creating something like GAC. Foeller was approached by a collector she knew from her Wallspace days, a real estate investor from Sugar Hill Capital Partners, who mentioned he had some interesting listings available if she wanted to see them. She called Schubert as soon as she stumbled upon one that felt like a good fit.

“We had been talking about collaborating on some sort of curatorial project for years. When I saw the space, I knew we could do something with it,” she said. Although Foeller originally thought they would do a joint series of exhibitions there, she realized GAC could be more inclusive. “It was big enough to accommodate so much more than just us,” she said.

GAC is an experiment—according to Foeller and Schubert—one that allows smaller galleries to tap into the collector base that New York offers, without the imposing overhead. Through March 2018 they plan on exhibiting a combination of fixed and rotating galleries, akin to the Condo model, while also offering space for other creative events and initiatives. “We wanted to address some of the problems that some days seem insurmountable as an individual gallery—namely the reality of real estate costs.”

A post shared by Janine Foeller Micky Schubert (@grandarmycollective) on Sep 19, 2017 at 11:01am PDT

“A lot of our colleagues would love to show more here, but can’t afford it. This allows them to occupy a space for a month or two, or three,” said Schubert. “Because we’re all going into it together, the costs go down substantially, one person isn’t responsible for covering the entirety of the space.”

Even more beneficially, there’s also a context built into the structure. “It’s not a random pop-up in Chelsea or Bushwick, you’re participating in an established community—that’s a critical difference,” Foeller explained.

If the model works, they’re open to extending their lease beyond March and to expanding to include rentable offices and a common viewing room for short term shows or collector visits. “We’re trying to think of creative ways to be more flexible and supportive of each other in this tough market,” said Foeller. “For us, it’s really important to stress the community aspect of this and how necessary it is to help each other when there are so many outside forces stacked against us.” 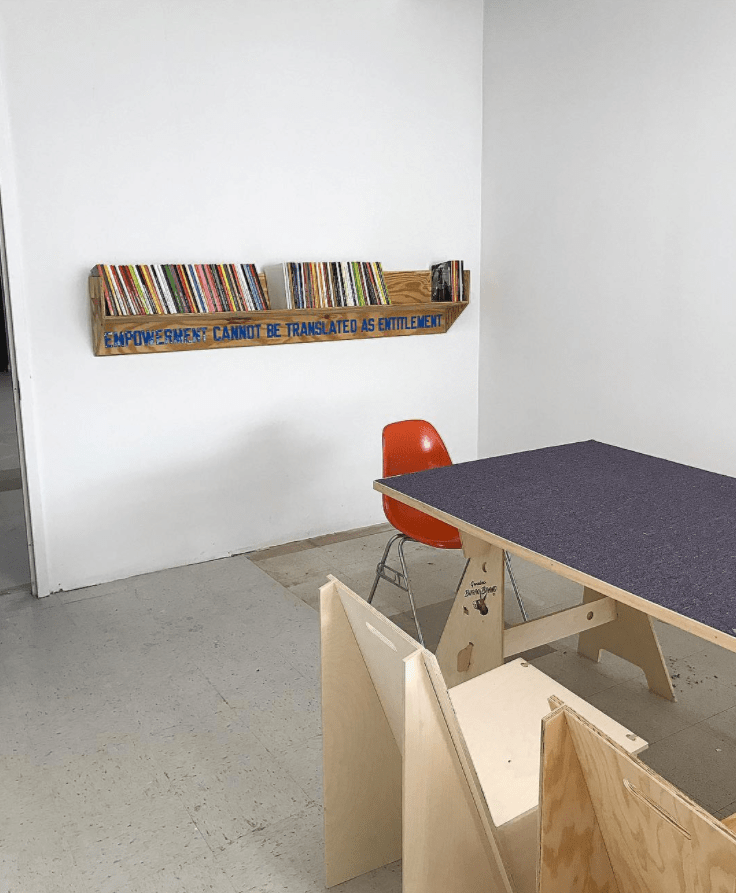