Take a moment to think about all the sounds you hear in a day—from the the shrill ring of your morning alarm to the soothing ocean wave sleep app you switch on at bedtime; from the podcast you listen to on your way to work to the unnecessarily prolonged car horns on your commute home. Even when you’re asleep, your brain is constantly processing ambient audio. Although invisible, sound shapes our understanding of our immediate environment. This fall, several museum exhibitions are exploring how.

According to Shannon Stratton, chief curator of New York’s Museum of Art and Design (MAD), sound can be surprisingly material, especially when you have to fit eight immersive installations, all of which can be activated by visitors, into a limited amount of space. Which is precisely what she did for Sonic Arcade: Shaping Space with Sound, on view at MAD through February 25, 2018, featuring works by artists like Arjen Noordeman and Christie Wright, Louise Foo and Martha Skou, and Julianne Swartz.

“We spend so much time digesting visual information on screens in our digital culture,” Stratton told Observer. “I wanted to make visitors reconsider their spatial relationship to the world around them.” This is perhaps best realized in the specially commissioned large-scale sculpture by the artist collective MSHR, which requires the physical activation of space in order to produce and manipulate the sound, which is made from a collection of analog synthesizers, optical sensors, light bulbs, oscillators, and microphones that are directly controlled by touch, movement, and light. As they move around and interact with the space, the audience will in fact “play” the sculpture audibly and visually, transforming the work into an architecturally-scaled instrument.

Transformer: Native Art in Light and Sound, opening November 10 at the National Museum of the American Indian (NMAI), George Gustav Heye Center in New York, asks us to not only rethink our immediate environment, but also our cultural histories through sound. Featuring the work of 10 indigenous artists, the installations use electronic and digital technology to convey traditional narratives and beliefs. According to NMAI associate curator Kathleen Ash-Milby, contemporary indigenous art is commonly misinterpreted to exist solely as part of the past. “Technology may seem far away from some of these traditions, but this exhibition demonstrates how these artists are looking to adapt them within in the context of today’s society,” she said.

For instance, Raven Chacon’s Still Life, #3 (2015) uses sound and light to tell the Diné creation story, a chronology long rooted in oral tradition. Using analog speakers installed at various intervals, the narration of the tale travels disjointedly through the space, accompanied by flashes of color that bathe visitors in light. “Chacon makes the story more conceptual by making it present and physical, something that just wouldn’t be the same performed or seen on video,” Ash-Milby explained to Observer. It’s no longer just a story but a complex experience that underscores our relationship to the earth.

New York’s Rubin Museum exhibition, The World is Sound, on view through January 8, 2018, takes the experiential beyond the mundane by looking at how sound can shape our very notions of existence. Featuring works by more than 20 contemporary artists including Christine Sun Kim, John Giorno, and Samita Sinha, as well as Buddhist ritual music from several monasteries in Nepal and India, the show is organized cyclically—from creation to death to rebirth—and explores the multidimensional functions of sound and listening in Tibetan Buddhism.

“Many religious practices and rituals in Tibetan Buddhism include music as an offering to please the deities,” says Jane Hsu, Head of Interpretation and Engagement at the Rubin Museum. “On a more metaphorical level, sound serves as a beautiful illustration of impermanence, a core principle in Buddhism.”

The centerpiece of the exhibition is Le Corps Sonore (Sound Body), composed for the museum’s iconic spiral staircase by the pioneering electronic sound artists Éliane Radigue, Laetitia Sonami, and Bob Bielecki. Ambient drone sounds inspired by Buddhist philosophy are “tuned” to the building, and will ascend as visitors wind their way up the staircase.

According to Hsu, visitors have really responded to the meditative experiences. “It speaks to how people are looking for refuge from the busy, always-on world that we live in. It’s increasingly rare to have a place where you can slow down and just listen.” 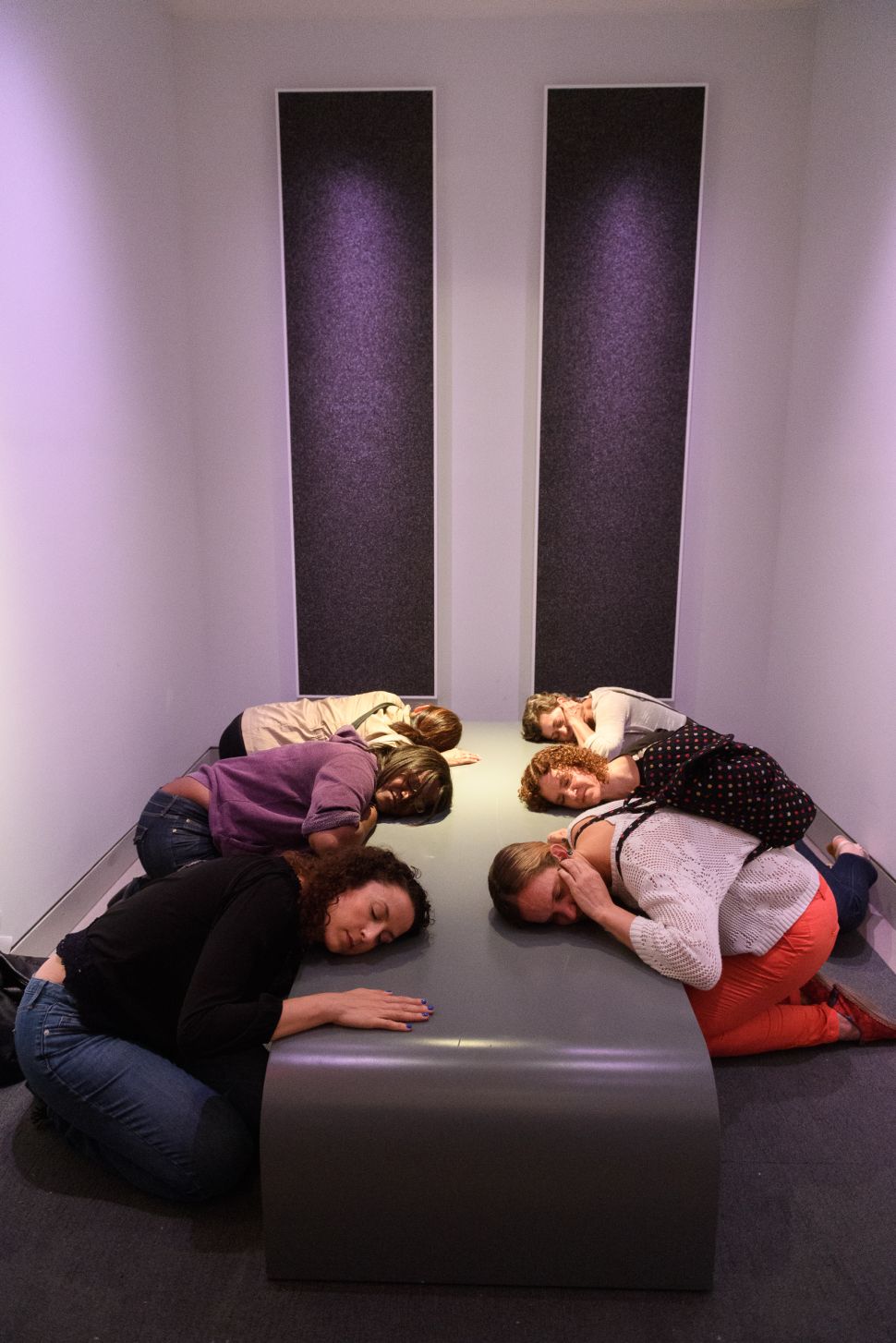