In the wake of the 2015 Baltimore protests that erupted after the death of Freddie Gray, self-taught photographer Devin Allen emerged as the voice of his hometown. Born and raised in West Baltimore, Allen gained national attention when one of his photographs was published on the cover of Time Magazine. Shot in black and white, the iconic picture depicted a young black man running from a sea of police officers in full riot gear, guns drawn. The David and Goliath juxtaposition defined the existential crisis America faced over race relations and cemented Allen as a social warrior.

Since the Time cover, Allen has continued raising awareness for the institutional problems plaguing America’s inner-cities. A recipient of the coveted Gordon Parks inaugural fellowship, the photographer’s current exhibit in Pleasantville, NY features poignant and everyday images of Baltimore, along with dramatic photographs from protests. Recently, Allen launched the project Through Their Eyes to spread “hope and love through art” by teaching students from underfunded districts how to use photography to express themselves. Through camera donations, Allen teaches young people how to tell their stories. He also photographs legendary basketball star Steph Curry on tour every year.

Before the Gordon Parks Dialogues series at Pratt University, we caught up with Allen to discuss the current political climate, how to gain a following on social media, and why photography is the ultimate vehicle for social change.

What goes through your head when you’re having all this luck while navigating such an ominous political backdrop?

My biggest thing is staying true to who I am as a person and staying true to the reason why I even ended up in this situation. I’m here because of Freddie Gray and my career was literally built on his broken back. As I navigate, it’s all about making the spotlight big, not just for me and my work, but also for my community. I have a position here where I can inspire other people to pick a different route than I took. The bigger my name gets and the farther my reach gets, it inspires all the people back home to think, “If he can change his life and pick up photography at 24, 25 and accomplish all this by 29, the possibilities really are endless.”

How important is storytelling in understanding what’s going on in the United States right now?

It’s always people on the outside telling our stories. It’s never us controlling the narrative or telling people what’s really going on. It goes back to that concept of slavery times when they created the narrative around the black brute. It’s the same thing. They make it seem like we’re evil people, we’re just killing each other; it’s black on black crime. They don’t talk about the love and how my community came together after Freddie Gray. They talk about Freddie Gray’s jail record, that he’s been arrested, but they don’t talk about the projects he lived in, how they don’t have running or how some of the women were forced to do sexual favors to get that and heat turned on. They don’t talk about the ecosystem that we inhabit that makes us the way that we are and how this country has shifted. That’s a narrative that has to be told but it’s hard to tell it when you’re not living it. With social media, it’s up to us to tell our story.

With so much online content out there, how does one stand out in order to create something truly authentic that can capture a large enough audience?

It’s definitely tough. When I look at some of my favorite artists, it’s about how you’re connected to your viewers. A lot of the content is mediocre or it’s copy. Everything is recycled. And then you have your trends that play a part in everything else. But I find that all the things that play a part, they have something unique about how they connect with their viewer. It’s easy to hop on a wave and follow a trend. The best pictures I’ve taken come from the heart and I can see that in some of my favorite photography. When I’m shooting photography, I’m shooting for everybody, but I’m shooting how I want because it’s still my vision.

What role does art have in today’s political climate?

I think art always has been a powerful thing. Art makes history because, when we die, what’s left to tell a story? You have poetry, you have essays, you have photography, you have paintings. These are things that stand the test of time when we’re gone. It’s all about how we get the next generation to understand that. Someone’s gonna find a book where people talk about Donald Trump and how hard that was and everything happened. If they were trying to translate that, digest that and regurgitate that, that’s when you get history books. I think art has always played a big part, but right now it’s key because the world is much smaller now. An issue in Palestine connects to someone from Baltimore. One photo or one video can shift the tide. It’s all in the palm of your hand now, you don’t have to wait for the paper to come out.

What do you want people to take away from the exhibit?

When people look at the death of Freddie Gray, I want them to see what Baltimore is. I want people to see the power, the struggle, I want people to see how poetic we are. The ghetto, the hood, whatever it is you want to call it, it’s not something to be frowned upon. I hope when people look at these works, they can humanize us and stop demonizing us. That’s how the media plays it. I want people to stop trusting the media. I want you to look at my ghetto, look at my hood, and see how beautiful it actually is. We continue to be grateful and we always find a way out. 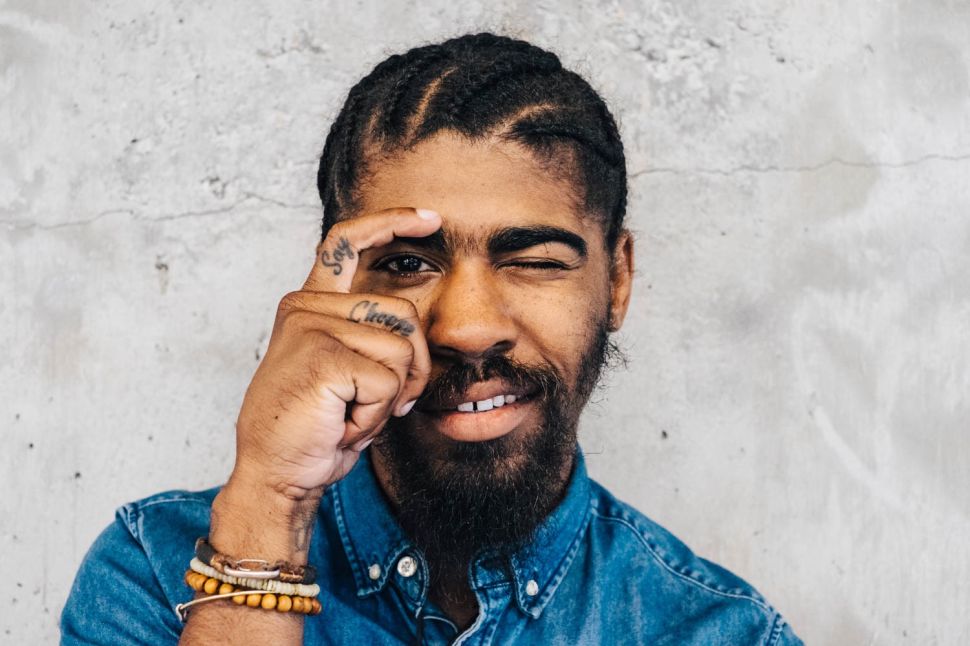