Contemporary British-American artist Sue Coe has long been known for her political activist illustrations, which explore subjects ranging from animal cruelty to class and gender issues. Likewise, German artist Käthe Kollwitz, who worked alongside the Expressionists at the turn of the 20th century and through the first and second World Wars, explored similar social problems of systemic violence and political tyranny her drawings. Now, New York’s Galerie St. Etienne will showcase work by these two women, separated by nearly a century, in their exhibition “All Good Art Is Political,” opening October 26.

Indeed, Coe has noted her own profound debt to the German artist in terms of specific pictorial motifs as well as more general subject matter, and the exhibition marks a rare opportunity to see the works in tandem. The exhibition is one of many around the world—although the only in the U.S.—marking Kollwitz’s 150th birthday this year. Including roughly 60 painting, drawings, and prints by both of the artists, it probes their shared believe that art can inspire constructive social change.

Coe spoke with Observer just before the show opened, explaining what drew her to Kollwitz’s work, how she has continued to seek social justice in the former’s stead, and why political art is always necessary in times of change.

When did you first encounter Kollwitz’s work and how has it influenced your own?

When I went to art school, there were no women represented in the history of art books. No women teaching art. I was encouraged to enter illustration, as females were considered candidates for making children’s books. The teachers told me it was a waste of time educating me, as I would get married and have children. They were married and had children but were somehow exempt. I asked why there were no female teachers and was told: “Sue, if you find a woman artist who is any good, we will employ her.” I pointed out they were not any good, yet had jobs.

From then, I resolved to discover women artists and found Kollwitz. Usually there would be just one image by her in entire volumes on German Expressionism. Her work had it all: a strong political content, a brilliant grasp of technique in all media and was relentless in its courage. Her courage manifested in making ordinary scenes of working people extraordinary, and pushing back against violence and war—revealing the struggle of humanity against injustice.

The exhibition is divided into different sections, bringing together works by both you and Kollwitz that explore issues such as class, gender, and war—especially how violence operates within these contexts. What is the import of these themes in relationship to Kollwitz’s era and our own? Have these issued changed over time?

What struck me was how these works spoke to each other [and related to] the conversations of today: the issues of violence, and power and control of the state over the most vulnerable. Kollwitz worked through two world worlds, she observed the massive economic inequality that destroyed families, she witnessed the murder of those who resisted. She projected onto the children a type of innocence, which I extend to nonhuman animals. It’s startling and shocking how these issues have not changed at all. Profit is still valued above all life. What has changed is that artists working today are aware of climate change and there is an increased sense of urgency. A war on all life is taking place, for the profits of a few.

Your newer works in the show address major recent events such as Trump’s election and the Grenfell Tower disaster. How do you decide what social issues to turn your attention to, and to represent them in order to evoke thoughtful change?

Hah, I was doing an interview about Kollwitz and mentioned that if Kollwitz was alive today, she would most certainly address Grenfell Tower, which came about because of economic austerity. To save a few dollars, the working poor were living in a building with broken fire alarms and no access to fire escapes. Then I realized I’m here, I have to do it.

People are reluctant to witness terrible things when they have no power over the situation, and that is the first lesson. “What can I do to change this? Nothing, so I don’t want to see it.” By making the effort to enter the realm of powerlessness, we align ourselves with the victim, and change starts to happen. Art doesn’t happen until the viewer says it does, many times artists are testing to see what works to create change. Trump, is important to address, but he is the symptom of the disease. The crime is economics. He is the diversion who has managed to make Americans hate each other.

Right now, a lot of artists and institutions are keen to make political work or stage politically-minded exhibitions. Do you feel that the more political art out there, the better?

Yes, as political art creates a dialogue and encourages people to participate in society. It breaks down the increasing isolation and desperation among people. As social conditions continue to deteriorate, the voice of the resistance will rise. It would be dangerous and naive to assume this voice will always be from the Left. The dominant class will manipulate culture to defend their class interest They will divide in an attempt to conquer. Based on history, this window of free speech will close very quickly and we have to take advantage of the opening while we can.

Art made by human hand is an antidote to digital psychosis. We step away from being mere consumers of Stuff. By writing a poem or making a painting, art slows time down, helping us to see the world around us. Political art can carry multiple meanings, its shoulders are broad. I see the making of political art that resists violence a sign that there is still hope. 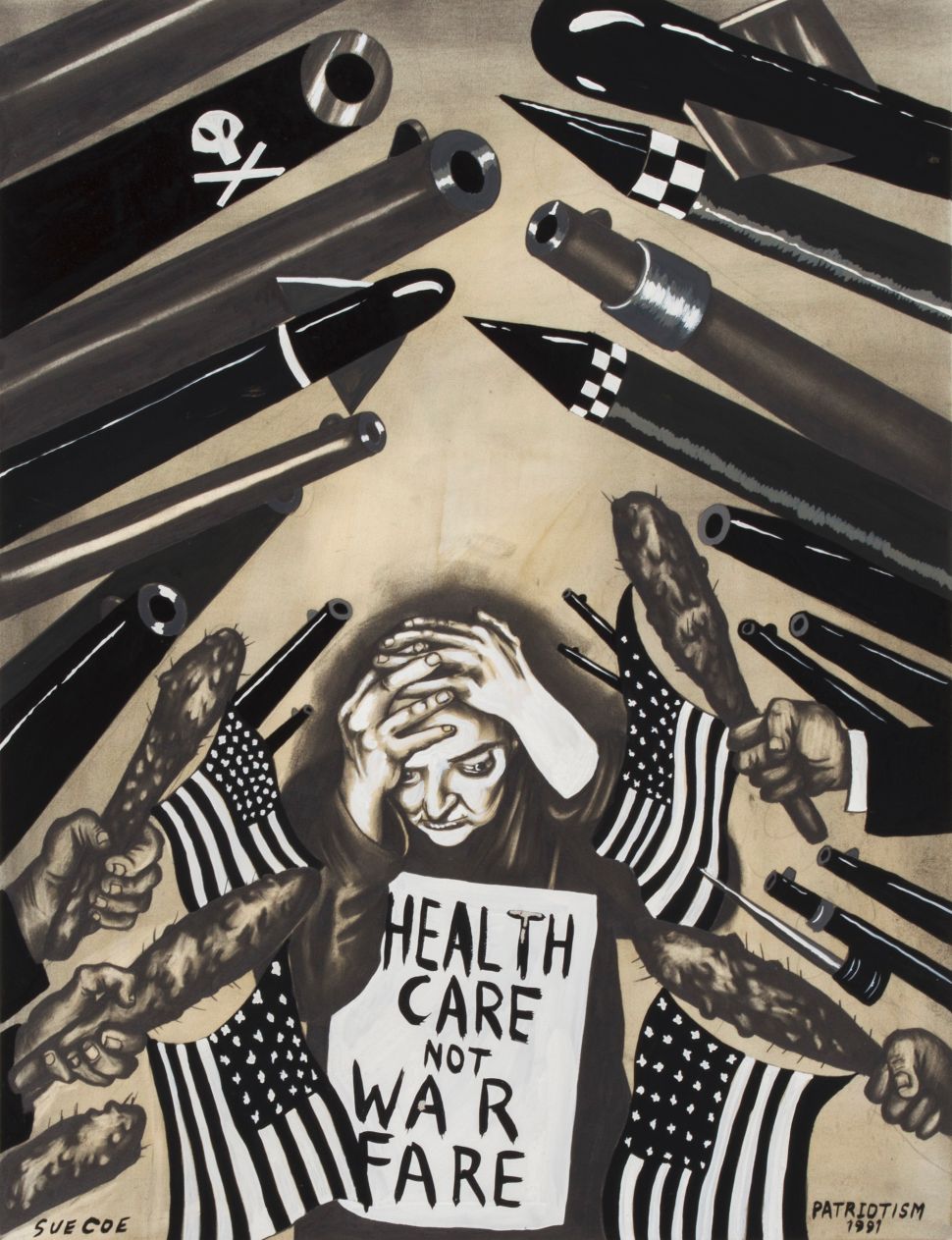