Immediately after learning that a millennial rode the immigration issue to victory in Austria, the media quickly labeled Sebastian Kurz a conservative populist. And why shouldn’t they? It’s a familiar story around the globe and makes sense to those who don’t know much about European politics. But it’s more complicated than that. In fact, Kurz might have unlocked the secret for a traditional party to reverse the tide of populism worldwide.

Beating the Populists at Their Own Game

Headlines dubbed the new Austrian chancellor as a far-right reactionary, but appearances can be deceiving. It’s true that Sebastian Kurz moved a center-right party (the OeVP, called “The People’s Party”) to the right. He campaigned against more immigration to Austria, but he was hardly the most conservative candidate. He didn’t even lead the most right-wing party in the 2017 legislative election. But Kurz shrewdly outmaneuvered the alt-right of Austrian politics. In America, it would be akin to the Republican Party picking a young leader who moves the party rightward to siphon votes away from an even more conservative candidate while leaving a return to the center as a future option.

Kurz didn’t try to run as an anti-Islamic reactionary full of politically incendiary comments degrading the immigrants. He left that job to the “Freedom Party,” or FPO, the alt-right of Austria. Founded by former Nazis, the FPOs rhetoric and policies are so incendiary that in 2000 the European Union sanctioned the country for allowing the party into a governing coalition. Many Austrians are still gun shy about choosing the FPO, and the OeVP provided them with a nice alternative.

Of course, the FPO will likely get into the governing coalition as the junior power. In Austria’s multiparty politics, getting 50 percent of the vote, much less 40 percent, would be a landslide election. As it stands, the young Kurz’s OeVP party won 31.4 percent of the vote, compared to the FPO’s 27 percent, and Austria’s Socialist Party’s 26 percent. The party that finishes first gets the initial crack at creating a coalition government.

Kurz could team up with the center-left Socialists, but that’s kind of how things had been going for the last few years: a bland grand coalition that even gave the Green Party a shot at the chief executive position. Voters in Austria appeared to reject that idea in favor of a reaction against immigrants, seeking to close borders, deny benefits, and demand that German be spoken. And Kurz tapped into this sentiment better than those in the Freedom Party (FPO).

The European Union: Another Foreign Foil

Of course, most Austrian election watchers expect that Kurz and his OeVP, needing a majority, will align with the far right Freedom Party (FPO) in a governing coalition. That’s because voters seemed to reject the boring centrism of the Socialist Center-Left + OeVP center-right coalition that had been in charge much of the last decade in Austria. The likelihood of the OeVP working closely with the Green Party today is as likely as a Donald Trump-Bernie Sanders coalition in America.

However, the European Union previously punished Austria for having a coalition that included this Freedom Party, which was founded by Nazis. But that’s what Chancellor-to-be Kurz is probably counting on.

Years ago, when the EU targeted Austria for allowing the FPO to be a governing party, it shocked the country. But now, nobody’s going to be caught off guard. In fact, such sanctions would play into Mr. Kurz’s hands, allowing him to play the populist card and tell voters “it’s us against them,” blaming the EU for punishing Austrian voters. It should shore up his support from the right, hardly appreciative of the internationalism that the European Union brings to Austria.

Working the “Freedom Party” into the government is part of Kurz’s master plan, but he does not aim to strengthen the FPO. In fact, he’s likely doing so only to boost his own party in future elections at the expense of his “friends” on the far right.

The last time the Freedom Party joined a governing coalition as a junior partner, it was seen as the new political force in Austria. But over their years in office, their support began to wane. After the coalition ended in 2007, the FPO declined so far that it took it a decade to get back into governance. Kurz is hoping he can strengthen his OeVP for future elections by shifting voters away from his “allies” on the right, a wise move.

At age 31, one would think that Kurz is a political neophyte. However, he has been foreign minister of Austria since the even more shocking age of 27.

For the last four years, he’s been rubbing elbows with the politically-powerful in Europe and beyond. He was on the front-lines of shutting down refugee access to Austria two years ago. Having been chosen the chair of the longtime OeVP, he’s more of a Mr. Inside than Mr. Outside. Yet his age and politics allowed him to position himself as the one best able to carry out these conservative policies, without verbally denigrating others or resorting to racist rhetoric.

Kurz’s talent has led many in the country to dub him “Wunderwuzzi,” which is like saying he walks on . But is that really the case? Can this wunderkind siphon off votes from the ultra-right while leading a center-right party?

Even though he advocates for populist policies, Kurz left himself a bit of wiggle room so that he could swing back to the center if the situation calls for it. He’s betting that voters in Austria will be similarly malleable, going strong nationalist or perhaps a little less so later if the refugee crisis abates and international opportunities open up. It’s a political high-wire act, but if anyone can pull it off, it’s the 31-year-old who became his nation’s chief executive before most millennials get their first promotion. 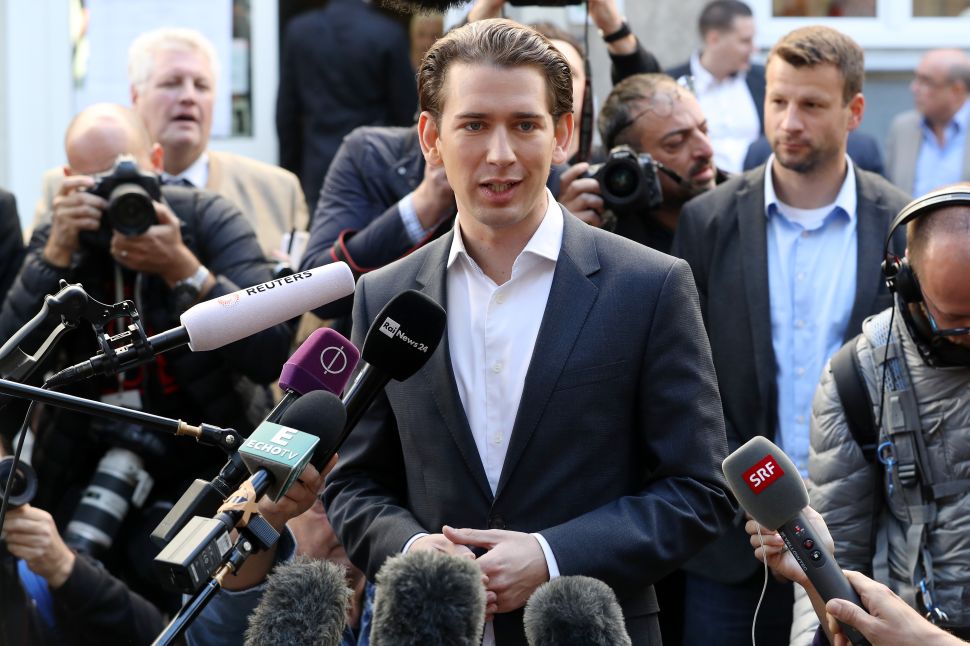