People see beauty in a myriad of ways. Take Barney Smith, for instance. The 96-year-old Texan is proud owner of the world’s largest collection of artistic toilet seats, most of which he painted himself. Yes, you read that correctly. And the opportunity is ripe for a museum to get off the pot, so to speak, and actually acquire this elaborate collection, as Barney is looking for a permanent home to display his unusual passion.

It’s long been observed that what you collect reflects who you are. Junius Morgan (robber, baron, banker and father of J. P.) sought the sort of portraits that European aristocrats used to decorate their homes because he had all the wealth imaginable, but wanted blue blood most of all. For Smith, the toilet season obsession first arose out of his natural resourcefulness.

“I used my first toilet seat when I needed a wooden shield to put little deer horns on,” he explains. “My dad cut out a little shield out of plywood and filed and sanded it and varnished and put his antlers on that shield. I picked up a toilet seat and I said, ‘I’m going to put my antlers on this.’ That is the small beginning to the collection. That’s the way I got started: Putting antlers and then other material I collected onto toilet seats. I’ve been doing artwork on toilet seats for 70 years.”

It is often some sense of returning to roots, or cultivating an early positive memory, that lashes a collector to his object of desire. Barney’s story of a formative bonding experience with his father illustrates this. But he was also trained as a plumber, and clearly carries a lively sense of humor, so that he should purchase artistic toilet seat covers, and also get into painting them himself, has a certain poetry to it. But Barney is also a pragmatic man.

“I was a plumber at the time I got started doing this,” he explains, “doing work and being hired out. My plumber friends would also round up seats for me. I even got 50 toilet seats from a plumbing supply. They were brand new, damaged in shipment. They said they were putting them in the dumpster, so I said I would like them. But I had to take the hinge off and throw half away. I took about half a dozen apart. I threw out the ring in the dumpster. I took the lid. That night I did a little art work on one.”

Starting in the 17th century, with the rise of art galleries in the Netherlands, artists first began to hyper-specialize in their subject matter and medium, and create artworks on spec, not waiting only for commissions. Thus we have specialist painters in seascapes, landscapes with cows, or even interiors of churches at night. Renaissance artist Properzia de Rossi specialized in carving astoundingly intricate miniatures out of peach pits. So Barney’s highly-specific art form is part of a rich art historical tradition, as he himself is aware, referring to himself as an “American folk artist.” Many of his toilet seats are not only painted, but have found objects attached to them, in something of an homage to Robert Rauschenberg.

Barney hopes to create a legacy, hence his desire to have a museum acquire his collection en masse. He’s getting a bit old to maintain his San Antonio roadside attraction, being 96 years old, and there’s comes a time when a man needs to think about retiring. He is aware that what he’s into is, well, a little unorthodox. But this makes him not only part of a rich tradition of American folk artists, but also part of a rich tradition of American eccentrics, and high on anyone’s list of destination roadside attractions. “I call the toilet seats plaques; they are places to put my art.”

“I was talking to a disc jockey in London, who said to me ‘With over 1000 toilet seats in your garage, do you have a Nativity scene?’” Smith recalled. “I said, ‘I surely do.’ He said, ‘The very thought of baby Jesus on a toilet seat!’ I said, ‘Well it’s in good standing—it’s not belittling Christ in any way!’”

Artists have often run into claims of being indecorous, when presenting religious imagery in a new light. Caravaggio had a number of his paintings rejected by the churches that commissioned them, and he wasn’t even painting on toilet seat covers. So Barney Smith is in good company.

“I’d love to still be known after I’m gone, as this old artist making toilet seats with my art. I’d like to be remembered as an artist. I’m hoping that somebody will come along and sign a note that they want to buy [the collection] and that they want to put in a museum, like I have here. I don’t want the toilet seats given out or sold individually. I want them to stay together.”

So let it be known, museums, galleries and gatherers of roadside attractions: Barney Smith’s toilet seat collection is available, if you’ve got a home for it. He’s even found an appropriate partnership in advertising his collection.

“I’m looking for offers and Clorox is helping me get the word out.”

The Case of the Missing Feet: Antiquities and Terrorism in Cambodia
The Photos Matjaž Tančič Could (and Couldn’t) Take in North Korea
Light Laced With Darkness: American Gothic Art 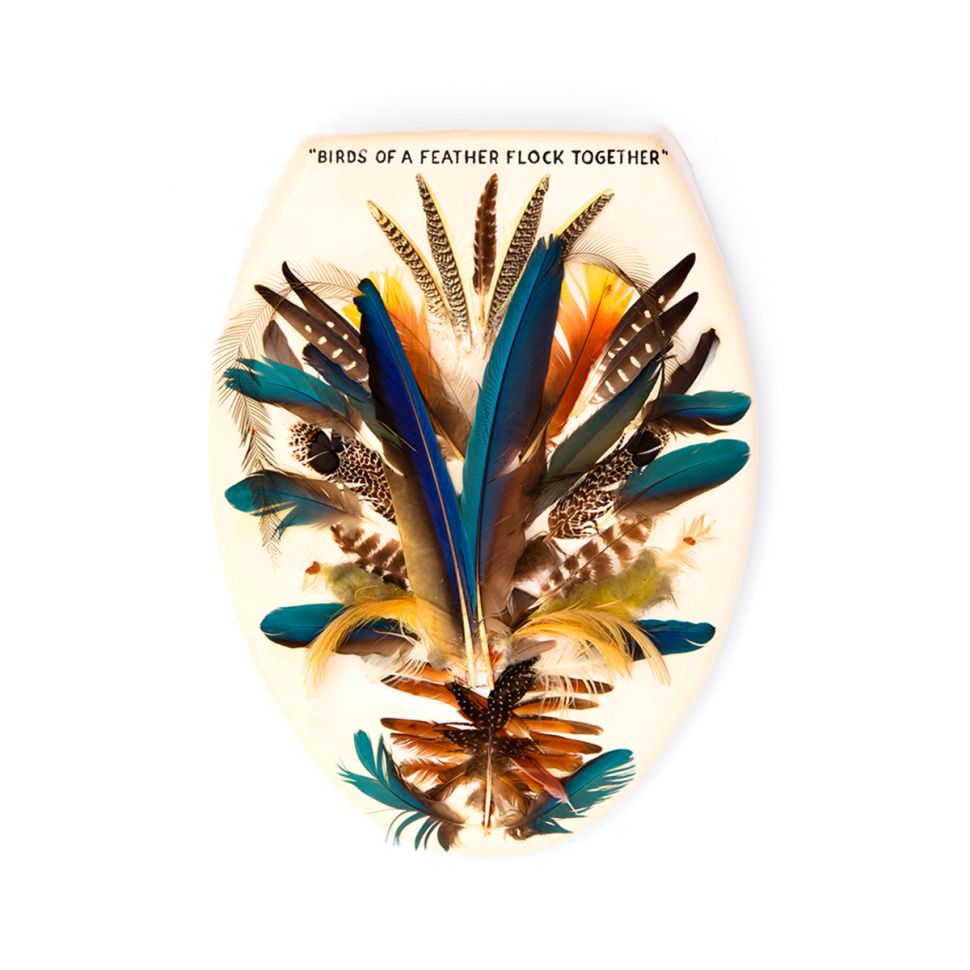