For the next four days, gallerists, curators, critics and artists from South America and beyond will be flocking to the Colombian capital of Bogotá, where the International Art Fair of Bogotá (ARTBO) is launching its 13th edition. Running October 26 to 29, the fair features 75 galleries hailing from 18 countries—roughly the same in size and scope as to last year’s iteration—and functions as a hub for art events taking placing around the city throughout the month.

Created by the Bogotá Chamber of Commerce in 2004, ARTBO has been a driving force behind the country’s growing contemporary art scene, integrating both commercial and non-commercial sections with an eye to cultivating collector bases locally and globally, while also seeking to engage the general public. To that end, this year marks the first time the Forum section is free of charge. It includes a series of performances by Mexican social practice artist Pablo Helguera investigating how contemporary forms of communication influence artistic discourse, as well as a presentation by Colombian architect Camilo Restrepo exploring the link between architecture and art.

Other notable sections in this year’s ARTBO include Proyectos, a curated section devoted to projects reflecting on civil liberties and the struggle to institute and maintain democracy; Artécamera, which showcases the work of 25 up-and-coming artists, two independent spaces, and three art collectives, all of which have no commercial backing or gallery representation; and Libro de Artista, which brings together 20 projects from national and international publishers that work with books as artistic objects and platforms for creative experimentation.

We’ve scanned the fairgrounds to bring you some of the strongest samplings from the 2017 edition, many of which offer hard political truths or a heavy dose of surrealist escapism.

Currea’s small whimsical cut-outs in shadow boxes are almost too cute for comfort, as if they were plucked from a children’s book. They’re populated by small glass receptacles filled with intricate paper flora and surrounded by two-dimensional monster feet, women made of mushrooms, sea creature tentacles—as well as the occasional fake eyeball and unraveled sewing thread. The materials of these miniature sets are evocative of craft, which has been gender coded as “women’s work” throughout history, yet their symbolism riffs on the male-dominated twentieth century movement of Surrealism.

Like Currea, this Spanish-born photographer creates fanciful scenes filled with strange flora and fauna. Yet Fontcuberta’s photographs are notably darker, as evidenced in her Serie Faunia from the 1980s and ’90s, which includes grainy, shadowy black and white photos of improbable but nonetheless alarming creatures of her own design. Move along through the booth and you’ll find her work from the early aughts returning to the human figure, like a magician-type character whose laser eyes eviscerates a yonic-looking oyster in one hand, while holding an egg with a clock on it in the other. Adjacent, another photo shows him celebrating a volcanic eruption, perhaps offering a not-so-unreal critique of how society controls and celebrates feminine and masculine sexuality.

In her work Stone Deaf (2009–10), Colombian artist Bonilla explores the 1954 petition by the British Communist Party to move Karl Marx’s remains from their original interment site to the main avenue of the Highgate Cemetery in London. The original grave can still be found, now with a stone noting the body has been moved. Bonilla presents a paper and graphite rubbing of the stone disclaimer along with a video projection of the marker as ants crawl over it. The busy, community-driven insects, perhaps a metaphor for the ideal of communism, labor tirelessly over a monument that is now devoid of its contents.

Chilean-born, Mexico-based artist Arias has made a name for himself for his embroidery, a craft long associated with female labor. His figurative sewn scenes are often comical, commenting on postcolonial issues of class and race, as well as the patriarchal systems that underwrite them. At Marso’s booth, a large tapestry is paired with a series of wall-mounted sculptural works depicting indigenous Latin American masks covered by a series of Donald Judd-like white blocks, proving a quippy critique not only of art history, but the general whitewashing of culture in the Americas.

Leyva, born in Cuba in 1983, presents a series of blown-up, seemingly mundane images of beaches, green fields, and city streets. Next to them, on small placards, are the original photographic referents, all of which include dictators from around the world. On their own, the images are a bit unmoving, but taken as a whole—when the seaside is rid of a lounging Castro or the golf course free of a swinging Trump—the series becomes a straightforward meditation on what our past, present, and future might be without political bullies. The photos are paired with an installation of silver spoons emblazoned with adages by rebels and activists, including the words of Mahatma Gandhi, Angela Davis, Emmeline Pankhurst and Ai Weiwei.

Argentinia-based Sacco is known for her photography and film work that explores how the media shapes our understanding of our individual and collective identities. For this year’s ARTBO, Rolf gallery presents a selection of her never-before-seen heliographic works on vegetal paper from 1997. Heliography is an early photographic engraving process that creates a direct positive image from exposure to sunlight. She transfers scenes drawn from images in Latin American and European newspapers, such as Colombian student demonstrations in the 1970s, and then inserts herself within them through light exposure, blurring the lines between specific historical moments and her own self-awareness.

Raised in Argentina and now based in New York, Kostianowsky uses her own discarded clothes to create life-sized sculptures of livestock carcasses, two of which hang ominously by chains outside of Y Gallery’s ARTBO booth. The softness of the fabric makes the figures seem almost toy-like, reminiscent of a macabre stuffed animal, creating a discomfiting tug-of-war between the nature of violence and the need for tenderness.

Pérez hails from Catatumbo, a jungle  region between Venezuela and Colombia that has long been subject to illegal oil and gold extraction and drug trafficking, which has created thug factions on both sides of the border. Her installation at ARTBO presents images culled from her online research and first-hand drawings of the forceful deportation of Colombians from their homes in the region by the Venezuelan government. On top of the startling images are the handwritten notes and words of Austrian Romantic composer Gustav Mahler’s 1894 symphony “Resurrection,” performed live each day at 3:00 p.m. by an opera singer who stares intently at the photos of displacement while she performs.

Located in the 21m2 outcrop of the fair’s main section, which spotlights first-time gallery participants, Bogotà’s own Espacia El Dorado presents the work of Andrés Matías Pinilla, who won the ArteBa young artist award in Buenos Aires this past May. The funds allowed him to create his ARTBO work, an interactive piece inspired by the legend of El Dorado designed after the old-school claw arcade games. Decorated with indigenous symbols and filled with stuffed monkeys, fair-goers can purchase a game token for $10 Colombian pesos (roughly .003 American dollars) to try their hand at retrieving the golden egg in the middle.

Presented in the Artécameras section, which showcases emerging artists without gallery representation, Colombian-born Sanín has created an immersive installation composed of floral neon designs on the walls, silver cement blobs on the floor, and three TV screens playing a short loop of an interview with Kim Kardashian scored by disjunctive electronic music and spliced with Furbies footage. The work is predictably Post-Internet in its aesthetic, but funny and frankly a tad scary. 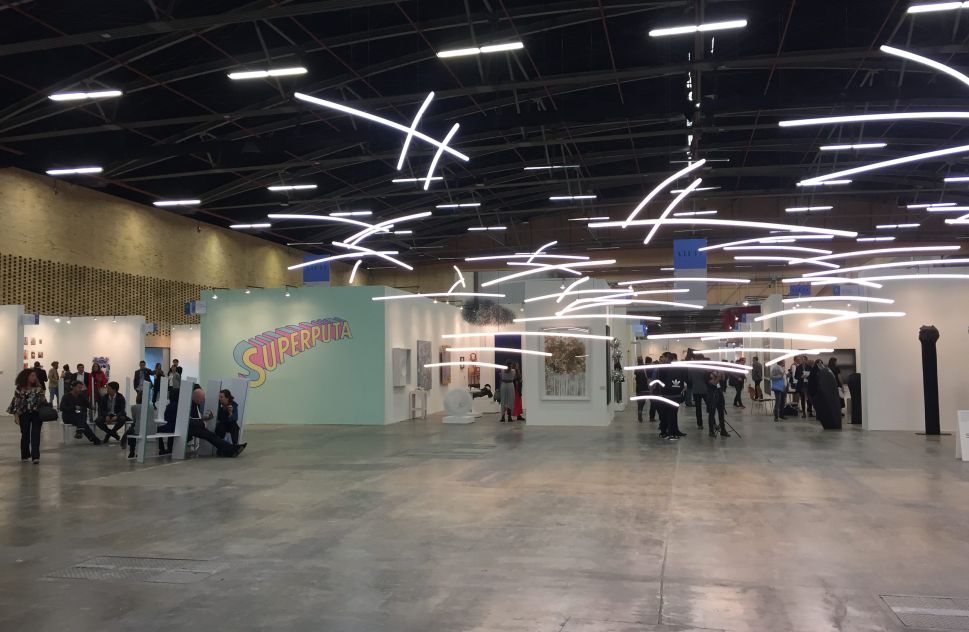