Erik Prince founded his own private mercenary army and now plans to run for Senate. Sources told the New York Times that the former Blackwater CEO is considering a Republican primary challenge in Wyoming against John Barrasso, a senior member of the Senate Republican leadership. Prince is reportedly being urged to run next year by former White House strategist Stephen K. Bannon, who left the President’s administration to lead a full-front assault against the Republican establishment with financial backing from New York hedge fund billionaire Robert Mercer.

This past weekend, Prince traveled to Wyoming to explore ways to establish residency, the Times reports.

Barrasso currently has the backing of Senate Majority leader Mitch McConnell and a number of well-funded political committees. But these could prove detrimental as Mercer money hammers an image of the Senator as an obstructionist Republican insider controlled by special interests. Last month in Alabama, the longstanding conflict between Trumpian firebrands and establishment Republicans culminated in the election of Roy Moore over McConnell-backed senator Luther Strange. Despite tens of millions of dollars in campaign contributions from McConnell’s allies, Strange lost by nine percentage points.

Although Prince seems like the perfect insurgent candidate to fight against the political establishment, he has actually been one of its greatest beneficiaries.

A former U.S. Navy SEAL and heir to the billion-dollar Prince Group holdings company, Prince founded the private security firm Blackwater in 1997. Initially providing security for politicians and top ranking government officials, the company has since ballooned into a private paramilitary empire with contracts across the Middle East and Asia. From 1997 to 2010, Blackwater received $2 billion in government security contracts.

In September 2007, the company came under scrutiny after Blackwater employees killed 17 Iraqi civilians during the Nisour Square massacre, forcing Prince to testify before a congressional hearing. Prince resigned as CEO on March 2nd 2009, a year before Blackwater rebranded as Academi. Prince currently heads the private equity firm Frontier Resource Group and is chairman of Frontier Services Group, which supports Chinese investments in oil and gas resources in Africa.

A Senate run would further cement Prince’s political capital while expanding his family’s influence under the Trump administration. Prince served as an informal advisor to the President this past election cycle, donating $250,000 to the Trump campaign and reportedly setting up a back channel between the campaign and someone close with Russian President Vladimir Putin; a meeting currently under investigation by the FBI. His sister, Betsy DeVos, was appointed Secretary of Education when President Donald Trump came to office.

“We are not aware of any meetings, and Erik Prince had no role in the transition,” said former White House Press Secretary Sean Spicer when asked about the alleged back channel.

Like Trump, Prince is wealthy enough to finance a significant portion of his campaign. Backed by Mercer, and aided by Bannon (who could mobilize support through Breitbart), the former Blackwater founder is in a unique position to capitalize off the Republican Party’s existential crisis. Despite being a political “outsider” who will have lived in Wyoming for less than a year, Prince may finally be ready to enter Washington’s spotlight from the shadows of mercenary warfare. In this battle, however, the former Blackwater CEO must play the role of a soldier reporting to Commander Bannon, General Mercer, and President Trump.

The 2018 midterms are posed to further disrupt the American political system. Russian disinformation attacks, Koch-funded political attack ads, and mounting anti-Trump resistance are all beginning to converge on a local level. If Prince does run, we can add an architect of the modern military-industrial complex to the mix. 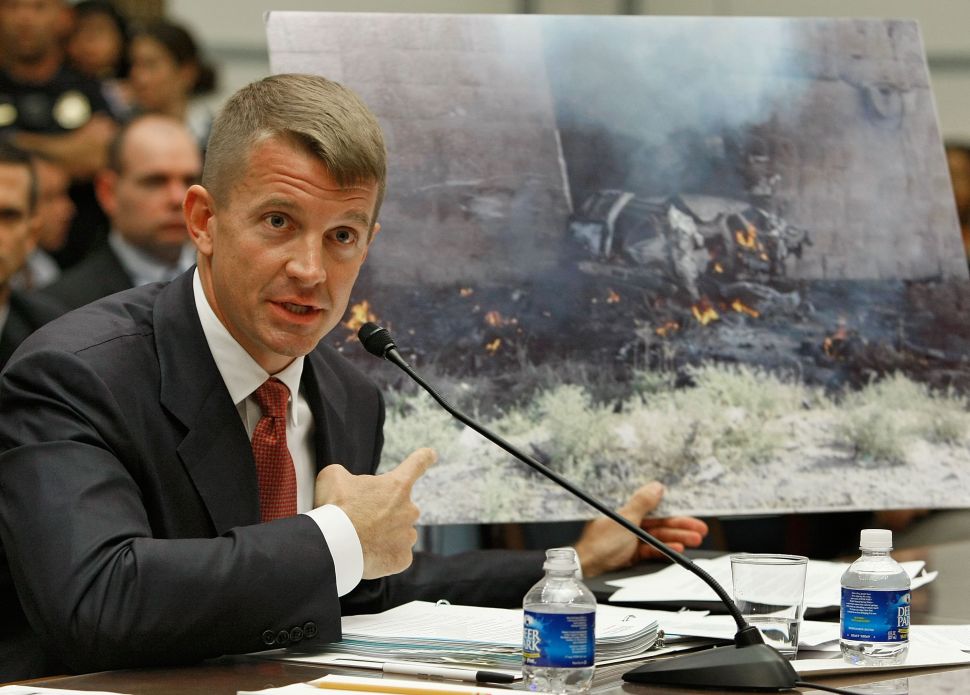