Lately, it feels like Lieutenant Olivia Benson should avoid answering any knock at her front door.

First, her ex-boyfriend Brian Cassidy showed up to tell her that she was being investigated for allegedly abusing her young adopted son, Noah.

Then it was Noah’s grandmother, who Benson didn’t even know existed, popping by. Enter Brooke Shields.

This encounter kicks off the struggle for little Noah between Benson (Mariska Hargitay) and the grandmother, Sheila Porter.

“It was Mariska’s idea [to have Brooke play this role],” explained SVU Executive Producer Julie Martin at a recent press event for the series. “She’s admired Brooke’s work and thought she’d be a great choice for this.”

Martin went on to say that she liked the idea of Shields for the part because she wasn’t quite what the creative team had in mind at the onset of casting. “It’s an interesting choice because we were thinking of someone more traditionally grandmotherly. Then we realized that this could be a really interesting and different way to go.”

Shields was animated as she gave more detail about how Hargitay actually piqued her interest in playing Porter. “I was at her house over the summer and she was like, ‘there’s this character and she’s so amazing, ‘and I’m like, ‘this is great!’ Then a little later she’s sitting next to me and she goes [all excited and sort of breathlessly], ‘It’s so great because there’s this girl and she dies and she has a kid and I adopt the kid and you’re the grandmother!’ And I was like, ‘who said what!’”

When it was suggested that Hargitay actually groomed Shields into taking the role, Shields laughed and quickly responded, “Absolutely. That’s exactly what she did—she pulled me in and then zinged me!”

Hargitay gave her side of this story: “I went to a screening of the comedy series Nightcap and Brooke was the guest star on that episode. I saw her in that and thought, ‘she’s perfect.’” So she pitched Brooke. As Hargitay tells it, she said “‘you’re going to play this amazing part,’” and she’s like, ‘what am I playing, ‘and I’m like ‘the grandmother,’ and she’s like, ‘I see how you are!’”

Delving into the intricacies of her character’s battle with Benson, Shields said, “There’s something about meeting at that door—the door opens and we’re both shocked by what we see. We immediately they go head-to-head [after that]. We don’t know the other person at all but the common denominator is Noah. That means all bets are off.”

She went on to say, “There’s no apology by either one of them and they don’t plan on it. This is not about ego, but about the power of being a mother.”

Because Olivia Benson is so beloved, Shields said that she’s ready for the response she’ll undoubtedly receive playing a character who goes up against the working single mother. “I’ve grown up with backlash,” she said. “That won’t be a new thing.”

She insists that what fans will appreciate most is the individual viewpoints of the two women. “I think that fans will see that both of them have a valid argument. What does that mean exactly? It is about winning? Finding the healthy compromise? We profess that the child is our main focus and we’d better be truthful to that. I think that these characteristics [in Sheila Porter] will allow [Olivia Benson] fans to at least not hate me. I’m not there to replace her or undermine her or stamp her out. I’m really not an adversary in that way.”

Noting the overall history of narrative drama and what it means in terms of her character, Shields added, “I think there was an epidemic in television where you would hear [executives say about female characters], ‘but she still has to be likeable,’ and I haven’t heard that once here. That’s not the goal. That’s boring.”

Jumping in here, Ice T, who plays detective Fin Tutuola, added, “I play a lot of bad guys and if you get people to hate you, you’ve done your job.” Then he laughed and added, “And also just don’t go to the internet! It’s real easy.”

Circling back to how her personal history adds to this experience, Shields said, “It’s not often that people will trust me with something that’s this important because there is a somewhat larger perception of me. It grew over the decades and you can’t escape that. So, it’s about how do you make the work really set the precedent and not just have it be about name recognition.”

Hargitay said that just as this storyline might rattle some viewers, she was pushed as well, revealing, “There was an article that said Benson was going to be put on her head and fans were like, ‘don’t do that,’ but, what’s more important than your kid? I would kill for my kid. At first you don’t understand what’s it’s like to step in front of a bus for your kid and then you have a kid and you’re like, ‘oh I get it.’ So, the rage that’s comes up from dealing with [all of this] surprised me.”

She disclosed that many scenes required her to keep control of Benson under extreme duress, particularly when her parenting skills are called into question. “It’s very exciting because it’s like a volcano!”

For now, Shields’s arc is planned to be five or six episodes, but the producers have stated that it may be extended as the storyline dictates.

But, one thing that Olivia Benson might really want to consider, according to Martin, who laughed as she said it, is, “We think [Olivia’s] doorman is in the men’s room quite often or that these people showing up at her door are sneaking in with other tenants. Whatever the case, she might have to move!” 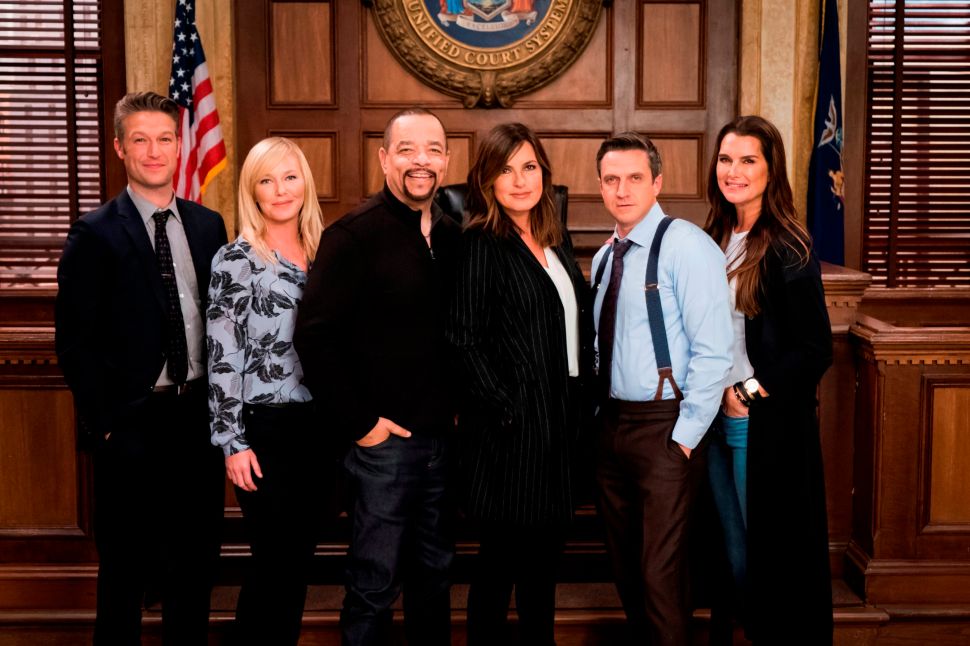