The leader of Catalonia held off on calling for snap elections, citing there were “no guarantees” national leaders wouldn’t invoke an obscure law to seize back control of the region in what has been a tense, month-long standoff between the Catalan government and Spanish national authorities.

In a day that began with the perception Catalan President Carles Puigdemont might waffle on separatist demands—by rescheduling a statement he was due to make in the middle of the day and then scuttling the statement altogether—and bow to pressure from Madrid to hold snap elections to placate federal government officials, Thursday ended with, well, more tension, as Puigdemont did an about face.

Puigdemont dumped Madrid’s snap elections plan, choosing instead to play brinksmanship with Spaniard government officials, who he argued had “embarked on the worst attack on Catalonia’s institutions and the Catalan people since the decrees of the military dictator Francisco Franco,” he said defiantly late Thursday.

“The Catalan institutions and the people of Catalonia cannot accept this attack,” the Catalan president said, further noting the measures invoked by the Rajoy administration—namely Article 155—were “incompatible with a democratic attitude and reside outside the rule of law. Because imposing a form of government not chosen by the citizens and without a parliamentary majority is incompatible with the rule of law.”

Article 155 would allow the central government to suspend some of the Catalonia region’s autonomy under specific conditions, including removing Puigdemont. But the law is not well defined and has already prompted a debate among legal experts about exactly how the government can implement Article 155 to suspend or remove powers now held by Catalan authorities.

Article 155 is only two short paragraphs of the 1978 Constitution of Spain, but it could allow Madrid to seize back control of Catalonia.

Specifically, it says, “If a self-governing community does not fulfil the obligations imposed upon it by the constitution or other laws, or acts in a way that is seriously prejudicial to the general interest of Spain, the government may take all measures necessary to compel the community to meet said obligations, or to protect the above-mentioned general interest.”

For nearly a month since violence resulted in a referendum for full independence from Spain, the wealthy northeastern region of Catalonia has seemed bent on instigating open, armed civil unrest—even conflict—inside Europe’s fourth-largest economy.

Madrid government hardliners rebuked, curtly, the separatist movement in Barcelona, arresting public officials and sending in national police to physically disrupt polling stations, while also—and accidentally—creating a sympathetic public perception of Puigdemont that he might not have garnered had the Spanish government not been so public about the crackdown.

On Thursday Puigdemont warned, “If the EU’s foundational values are at risk in Catalonia, they will also be at risk in Europe.”

This got the thousands of Catalans, who had been gathered around different Catalan government buildings throughout Thursday, excited.

Pro-independence supporters came out initially hearing Puigdemont wouldn’t do anything to stop Rajoy from ordering the Guardia Civil in to arrest officials and seize buildings. For hours during the day, the crowds turned surly against Puigdemont, thinking he was betraying them. But then he spoke.

From that point forward, according to media reports, the throngs chanted against the idea of snap elections and for independence.

Now it looks like they’re going to get the fight—Round 2—they originally wanted. 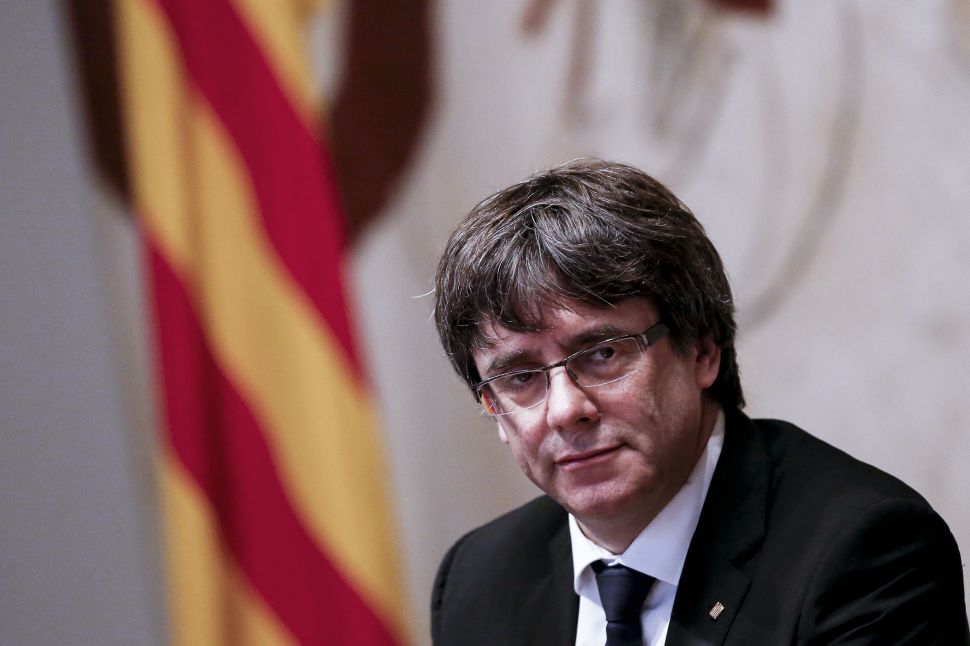